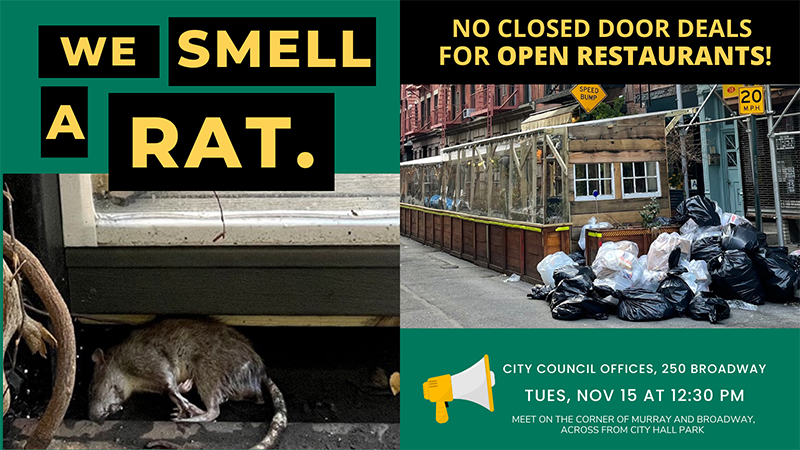 The flier for the Nov. 15 protest.

Takin’ it to the streeteries: Shed foes to demand Council hold hearings, do enviro study on permanent Open Restaurants bill

BY THE VILLAGE SUN | Shed foes intend to give the City Council “a taste of their own medicine” — complete with a mock-up of a dining shanty crawling with ravenous rats and festooned with bulging trash bags.

“Once again, the New York City Council is pulling a fast one,” the event’s organizers, the anti-shed group CUEUP, declared in a press release. “On November 22, it will vote on a bill to set the rules for a permanent Open Restaurant program. Intro 31-A [the bill] was created behind closed doors, with the help of the usual cast of characters, i.e. the New York Hospitality Alliance, the city’s restaurant and nightlife lobbyists.

“Those of us who live with the noise, the rats, the trash, the unswept streets and blocked sidewalks will have no input, nor a chance to comment. The message to residents is the same as it has been for the last two years: STFU. We must deliver our own message: WE WILL BE HEARD.”

Nope, the shed critics say they most definitely will not shut the f— up. They have three main demands that they will make loud and clear: that public hearings on the bill be held; that an environmental impact study for permanent Open Restaurants be commissioned; and that the city’s community boards be involved in the program’s plannnig process.

The press release lays out the protest game plan: “We carry signs. We chant. We picket. A small group stands in front of the Council offices with their mouths taped, symbolizing how the Council is treating residents of this city. A float pulls up to the curb with a mock-up of a shed, complete with rats and hanging trash bags. It has a speaker that blasts the shed sounds, that we live with every night, directly into the offices of the City Council. This demonstration will be a raucous expression of public outrage.”

The shed haters note that their actions thus far — including lawsuits — have flipped the script on the debate on the outdoor dining structures, which they deride as public-space-usurping yurts.

“Our efforts have changed the media conversation from outdoor dining as a no-brainer, to outdoor dining as a neighborhood horror,” they said. “Now we have to close the deal. … Even if you’re not accustomed to going to demonstrations, please show up and be heard. It’ll be an hour out of a day that will help restore our streets. If not, it’s noise-rats-trash forever.”