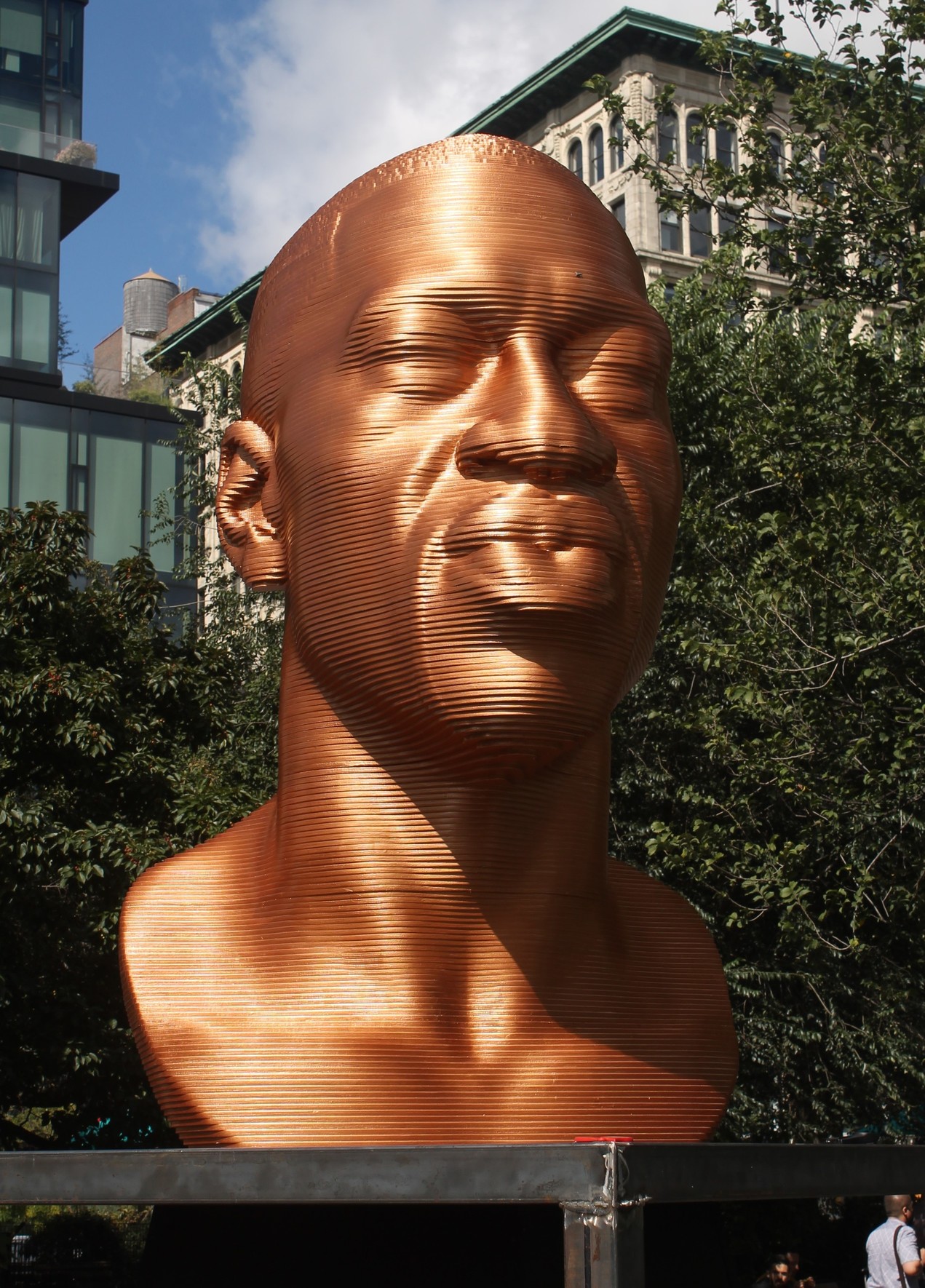 "Floyd" is one of three busts in the "SEEINJUSTICE" public-art installation in Union Square. (Photo by The Village Sun)

BY LINCOLN ANDERSON | Terrence Floyd was in Union Square Thursday morning for the unveiling of a massive bronze-colored bust of his brother George Floyd, along with matching ones of Breonna Taylor and John Lewis.

“Yes, I love my brother. I miss my brother,” he said. “What happened to my brother was the straw that broke the camel’s back. There were others before my brother.”

Terrence Floyd currently runs the nonprofit We Are Floyd foundation, which is based in New York City.

George Floyd’s death in May 2020 under the knee of a Minneapolis police officer sparked a wave of protests and a racial reckoning across America. Two months earlier, Breonna Taylor had been shot in Kentucky by police who burst into her apartment as part of an investigation. Congressmember John Lewis, a civil-rights icon, also died last year, in July, at age 80.

The exhibit of the three busts is entitled, “SEEINJUSTICE.”

“As a result of the death of George Floyd, there came a global awareness and understanding of the plague of injustice across the world,” he said. “The exhibit represents this global understanding, and from understanding comes action, and from action comes change.”

He told The Village Sun it was his wife who prompted him to start what would eventually grown into a sculptural triptych.

“My wife had the idea in the days of COVID, after George Floyd,” he related. “She said, ‘You have to do a sculpture of George Floyd.'”

Next he thought to do a piece on Taylor. After that, he did another sculpture, of Lewis.

“I completed John Lewis — then a week later, he died,” Carnabuci said.

The three heads are made of wood and painted bronze. Each is actually composed of 200 horizontal slices of wood that are created with a CNC (computer numerical control) machine, a sort of predecessor to 3-D printing.

As for why the wood medium, Carabuci said, “I’m a wood guy.”

“We will not stop until we are protecting the George Floyds and the Breonna Taylors of the world,” she vowed. “We will not rest until we know that our future generations are protected and secured.”

Deputy Mayor Phil Thompson gave powerful words. He co-chairs the city’s Task Force on Racial Inclusion and Equity and is a commissioner on the city’s Racial Justice Commission.

Thompson said his great-great-great-grandmother, Sarah Lee, was enslaved on a plantation owned by the father of Confederate General Robert E. Lee. The deputy mayor said that, whenever he sees a Lee statue, it evokes to him the idea of “bondage.”

On the other hand, referring to the shining busts ringing the plaza, he said, “These beautiful statues really represent the struggle of Black people for the freedoms that America is supposed to stand for.”

He shared another memory, of a great-uncle who was a photographer and documented a lynching in the South. Thompson said the photo includes young white children who were brought to the execution, as if it were a picnic. He decided to put the photo on his office desk as a stark reminder of injustice and racism.

Thompson mentioned past victims of police violence, like Amadou Diallo and Eric Garner.

“All of our people have suffered for so many generations — for nothing,” he said. “What happened to George Floyd was just a lynching in another form.”

The busts will remain on display at Union Square through October.

The group behind the installation, Confront Art, was founded by Andrew Cohen and Lindsay Eshelman in 2020, with the mission to promote diversity and education in the arts by joining visual artists with social-justice causes. The group specializes in immersive art.

Confront Art has been working with Terrence Floyd’s We Are Floyd nonprofit, as well as John Lewis’s foundation, on social-justice issues and providing a safe space of healing and community through public art.

Jennifer Falk, the executive director of the Union Square Partnership business improvement district, said the BID is proud to host the sculptures in the square.