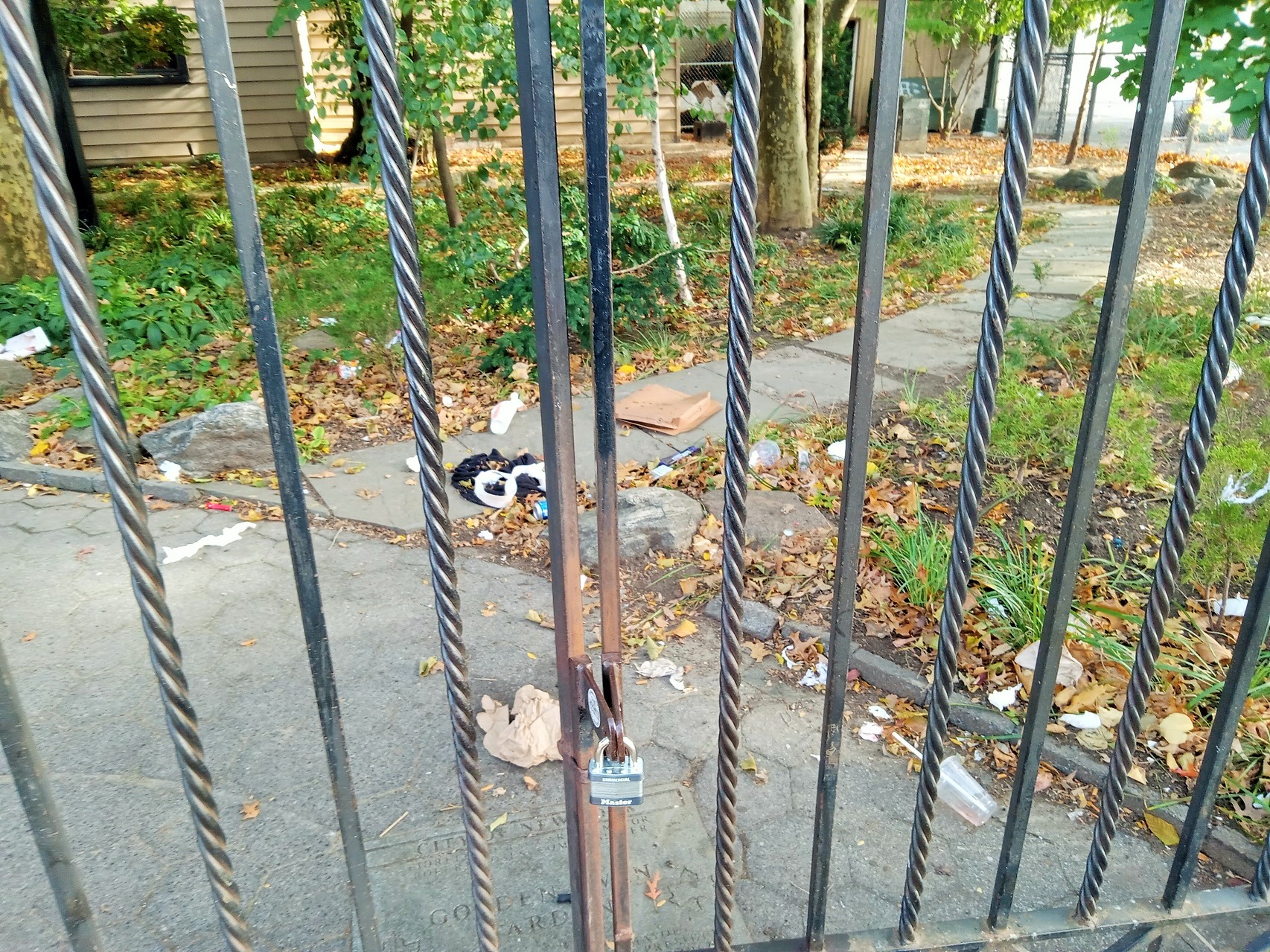 Golden Swan Garden was recently locked and looking the worse for wear. (Photo by Bob Gormley)

BY THE VILLAGE SUN | It was a feel-good story…or so it seemed: The Washington Square Park Conservancy had branched out from the eponymous park and pitched in to spruce up the downtrodden Golden Swan Garden one block away, which had been dumped on, literally — in every sense of the word. The park, which had become an open-air toilet, was now to be open and inviting once again.

However, a few days after The Village Sun’s report (which was based on a press release from the conservancy) at the end of last month, Bob Gormley, who recently retired after 16 years as district manager of Community Board 2, happened to be strolling by the garden and was shocked to see it both locked during the day and littered. He e-mailed photos to the newspaper of the sorry scene.

“I just took this photo,” he told us. “Garden still locked and still full of litter. I don’t understand why they would send a press release when the park looks so awful. Also, the stone tablet with the Eugene O’Neill item has been knocked over.”

The former DM also noted the dazzling tulips that were planted in the garden are gone now, too, wondering if “someone took them to sell to the deli!”

Ironically, a glowing quote from Gormley was even included in the aforementioned press release.

“The good work of the Parks Department and the Washington Square Park Conservancy has transformed Golden Swan Garden from an eyesore into an oasis,” Gormley gushed in the press release. “It’s a community gem.”

However, he told The Village Sun he recalled giving that quote a few months ago, and that now he actually wishes he could retract it because the garden is not living up to the new hype.

Grace Harman, the conservancy’s communications manager, assured that the organization is working with the Parks Department to bring the garden “back up to standard”…again.

“As the press release mentioned, this is an ongoing process,” she said. “While the spruce-up helped quite a bit, it was never going to be one and done. Tackling physical issues also doesn’t fully solve the social issues that we run into across the entire neighborhood. We’re currently working with NYC Parks to establish a plan to address Golden Swan’s needs and how we can work in partnership to meet them. The plan is for WSPC to continue deploying volunteers, purchase supplies and fund staffing as needed to bring the space back up to standard.”

Gormley stepped down from his staff post at C.B. 2 at the end of the summer without hoopla, having said beforehand that he planned to make a low-key “Irish exit.”

That may have been the case, but he’s not going quietly into that good night — especially when it comes to local Downtown-area pocket parks and gardens. Jeannine Kiely, the C.B. 2 chairperson, said shortly after retiring, Gormley notified her that a poorly planted tree looked like it had already croaked in the new Manuel Park on E. Fourth on the Department of Environmental Protection watershaft site by the Merchant’s House Museum.

In all seriousness, Gormley was an excellent, very professional and collegial district manager — the top post of the C.B. 2 paid office staff. Board members, as well as community members, are sorry to see him go. Not only did Gormley bring relevant government experience, having previously worked for the city’s Department of Consumer Affairs (now the Department of Consumer and Worker Protection) — where he learned the ins and outs of sidewalk cafe regulations — he’s also a lawyer. The board is still searching for his replacement.

In retirement, Gormley, among other things, plans to travel, which is one of his passions. Asked if he’ll be playing pickleball, he said he’ll do something physical, but no, not pickleball.