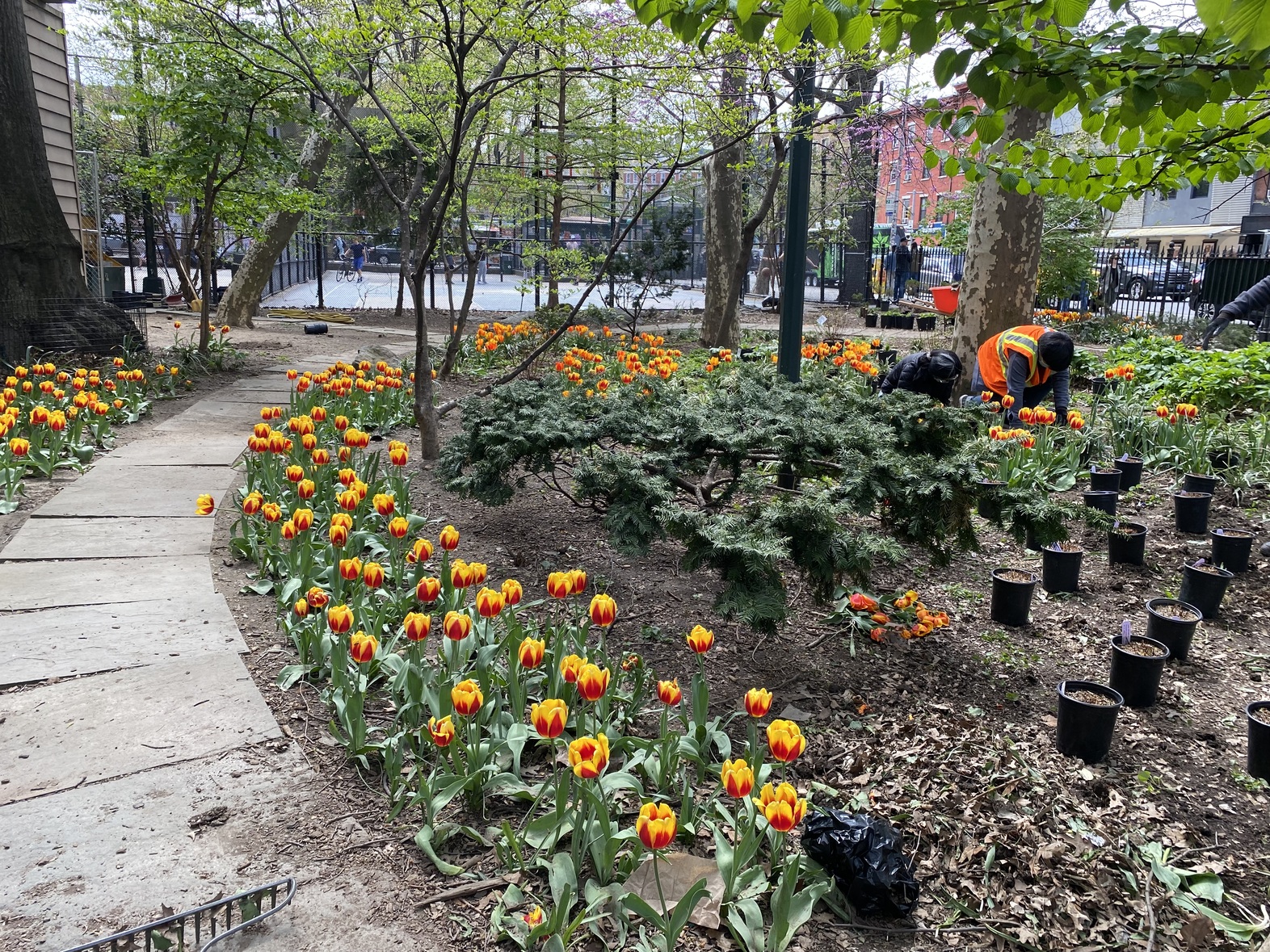 Flowers springing up in Golden Swan Garden thanks to the new improvement effort. (WSPC)

Park conservancy branches out to spruce up Sixth Ave. garden

BY THE VILLAGE SUN | Golden Swan Garden is shining once again.

Located at the southeast corner of W. Fourth Street and Sixth Avenue, the 12-year-old garden had seen better days — some likened it to an “open-air toilet” — when two park organizations recently decided to pitch in and help the Parks Department restore its luster.

Thanks to a pilot program developed by the Washington Square Park Conservancy in partnership with the Parks Department and the Partnership for Parks, Golden Swan is being transformed “back into a welcoming space” and will be maintained for the community to enjoy.

The effort came about when the conservancy noted “deteriorating conditions and a lack of committed volunteers” in nearby Golden Swan Garden, and in 2021 approached Parks about doing a joint pilot project to use conservancy resources to upgrade the Sixth Avenue space, which Parks “enthusiastically supported.”

“The good work of the Parks Department and the Washington Square Park Conservancy has transformed Golden Swan Garden from an eyesore into an oasis,” said Bob Gormley, the former district manager of Community Board 2. “It’s a community gem.”

This past April, with funds secured by the conservancy and a coordinated volunteer effort with NYC Service Corps — a Mayor’s Office initiative — the Parks Department oversaw an initial spruce-up of Golden Swan Garden, cleaning and replanting the space. Washington Square’s gardeners — supported by the conservancy — removed overgrown plant life and replaced it with deep-shade creeping perennials. Their lower profile provides color and ground coverage, highlighting the remaining magnolia tree, cornelian cherry tree and white birch tree, without blocking sightlines from the sidewalk. The garden’s damaged pavers have been repaired or replaced and new trash cans have replaced the broken bins. Staff repainted lamp posts, and the irrigation system is now in good repair, again thanks to conservancy funding.

Going forward, the conservancy has committed to coordinating regular volunteer clean-ups of Golden Swan Garden to ensure that the work being done is maintained. The first open community clean-up day of Golden Swan was held on Oct. 22. Volunteers picked up litter, raked leaves and planted liriope. Ongoing volunteer cleaning efforts will begin in earnest in the spring, and Parks and the conservancy are closely watching this pilot to determine if the model could serve in other pocket parks in the neighborhood.

Completed in 2000, the Golden Swan viewing garden boasts granite curbs and stone pathways, an ornamental steel fence and a number of flowering trees. Survey work completed by conservancy and Parks personnel noted deteriorated conditions in need of repair, including trash cans, the irrigation system, pavers and ironwork. The garden’s shrubs and trees had become so overgrown that a “green wall” grew each summer, quickly turning the space into an open-air public restroom.