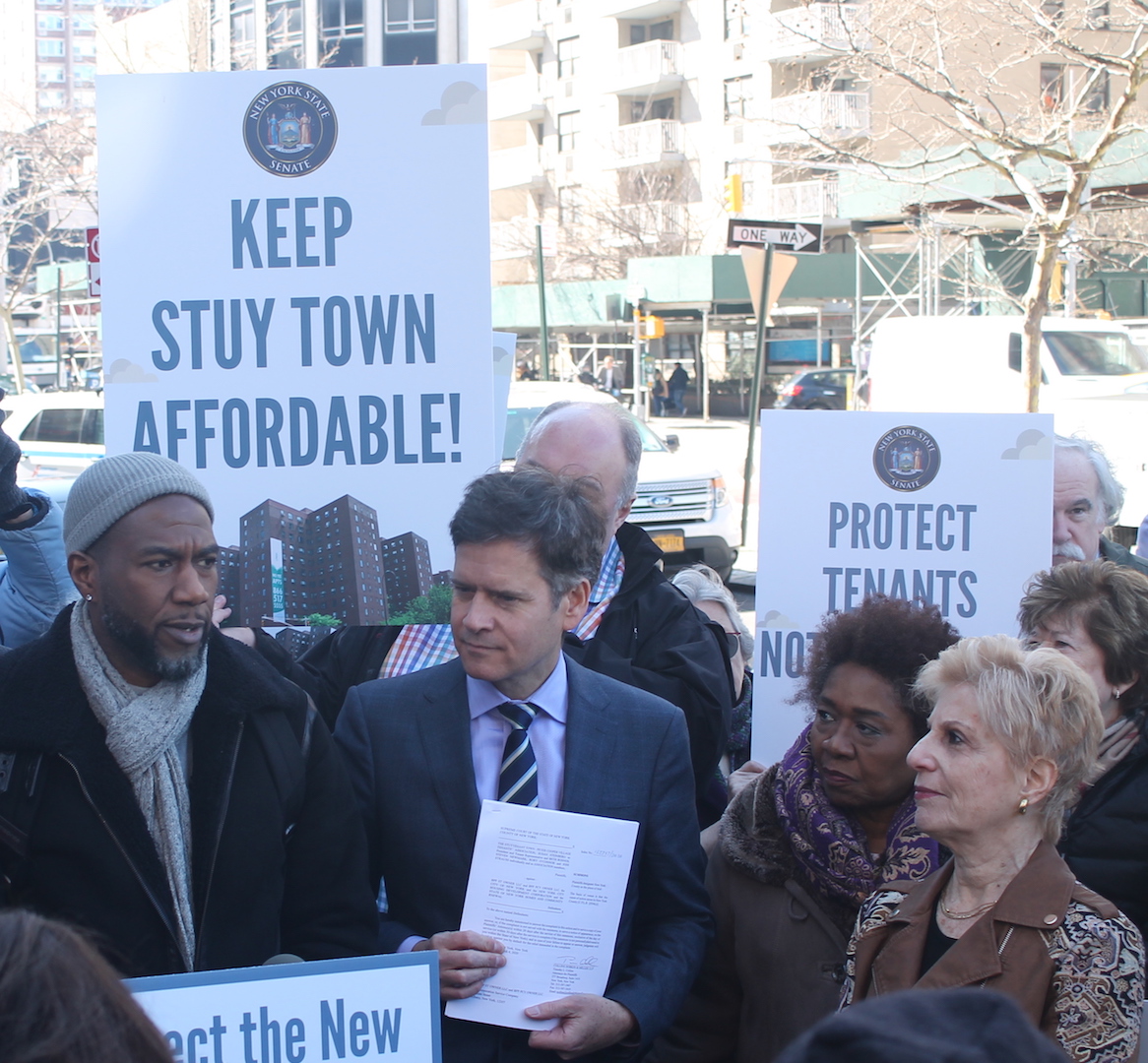 BY THE VILLAGE SUN | Trying to make sure their landlord doesn’t pull a fast one, tenants at Stuyvesant Town and Peter Cooper Village on Thursday filed a legal action in State Supreme Court to protect thousands of apartments likely facing illegal deregulation.

In the first tenant-led test of New York’s new tenant-protection legislation — the Housing Stability and Tenant Protection Act of 2019 — the action asks for a declaratory judgment on whether the new laws apply to residents of the iconic middle-class housing development.

Starting on July 1, more than 6,200 of the rent-regulated apartments at S.T.P.C.V. could be subject to illegal deregulation by the East Side complex’s owner, Blackstone, the tenants say.

However, the tenants’ legal action argues that deregulating the units would be a clear violation of H.S.T.P.A., which established that any apartment that was rent-regulated when the law passed — on June 14, 2019 — would remain subject to rent regulation forever.

“The principal at stake in this tenant-led lawsuit is nothing less than the future of affordable housing at Stuyvesant Town-Peter Cooper Village,” Hoylman said in his remarks. “I join my colleagues…in demonstrating our support for this legal action and urging Blackstone to stand down and follow the law.”

“Despite being the wealthiest landlord in the world, Blackstone must also follow the law,” Epstein said.

Powers grew up in the East Side complex, which stretches east of First Ave. between 14th and 23rd Sts.

“Since its opening, generations of middle-class tenants have been able to build a home in Stuyvesant Town and Peter Cooper Village,” he said. “I know firsthand that it is a unique community, a true neighborhood, here in New York City, made possible because of strong rent regulations.”

Blackstone has committed to not raising rents beyond Rent Guidelines Board thresholds until the legal matter has been resolved.

In the 1990s and early 2000s, the former owners of the 80-acre complex illegally deregulated apartments — under the guise of luxury decontrol — while receiving J-51 tax benefits. J-51 tax benefits — which are granted for renovations — require that rent regulation be preserved during the period the landlord is receiving the benefits.

In 2007, then-current and former S.T.P.C.V. tenants sued the landlord over the illegal deregulations in the landmark Amy L. Roberts et al v. Tishman Speyer case and won. As a result, 4,300 apartments were re-regulated in 2009 and nearly 2,000 more have been re-regulated over the past decade.

In turn, five years ago, Blackstone signed an agreement to keep 45 percent — or 5,000 — of the complex’s apartments affordable. Yet, Blackstone is also citing a previous 2012 legal agreement, under which the complex’s roughly 6,000 other apartments are set to be deregulated when they are removed from the J-51 program this June.

It all sounds complex and confusing, but the politicians supporting the tenants assure that the sweeping new law is on their side.

Tim Collins, the attorney for the tenants, said the legal action, at this point, is merely “anticipatory.”

“We’re just asking for clarification, we’re not asking for damages,” he said. “Blackstone hasn’t done anything wrong yet.”

Rents would not go down as a result of this legal action, but they would be subject to rent regulation, he said.

That’s a very important point, noted Powers: It means the landlord would not be able to effectively evict tenants — even ones already paying a market-rate rent — by raising the rent astronomically beyond what they could pay.

Powers said there’s no question about it: The entire complex — with its 11,000 apartments — is legally rent-regulated.

Susan Steinberg, president of the S.T.P.C.V. Tenants Association, said many apartments in the development already sport a high rent, with one-bedrooms going for $3,500 a month or more.

“We have one person renting for $14,000,” she said, with a disbelieving smile. “I think they made one a penthouse or it’s one of the five-bedrooms.”

“Stuyvesant Town was for firemen, policemen, nurses and teachers,” she said. “Peter Cooper was for judges, doctors and lawyers.”

Judith Miller, a Stuy Town resident since the 1970s and active member of the Gramercy Stuyvesant Independent Democrats, said she knows she has a good rent deal. But she doesn’t want to see her neighbors exploited.

“My husband was an original tenant. He came in 1950,” she said. “I’m in a wonderful position, but these positions are diminishing.”