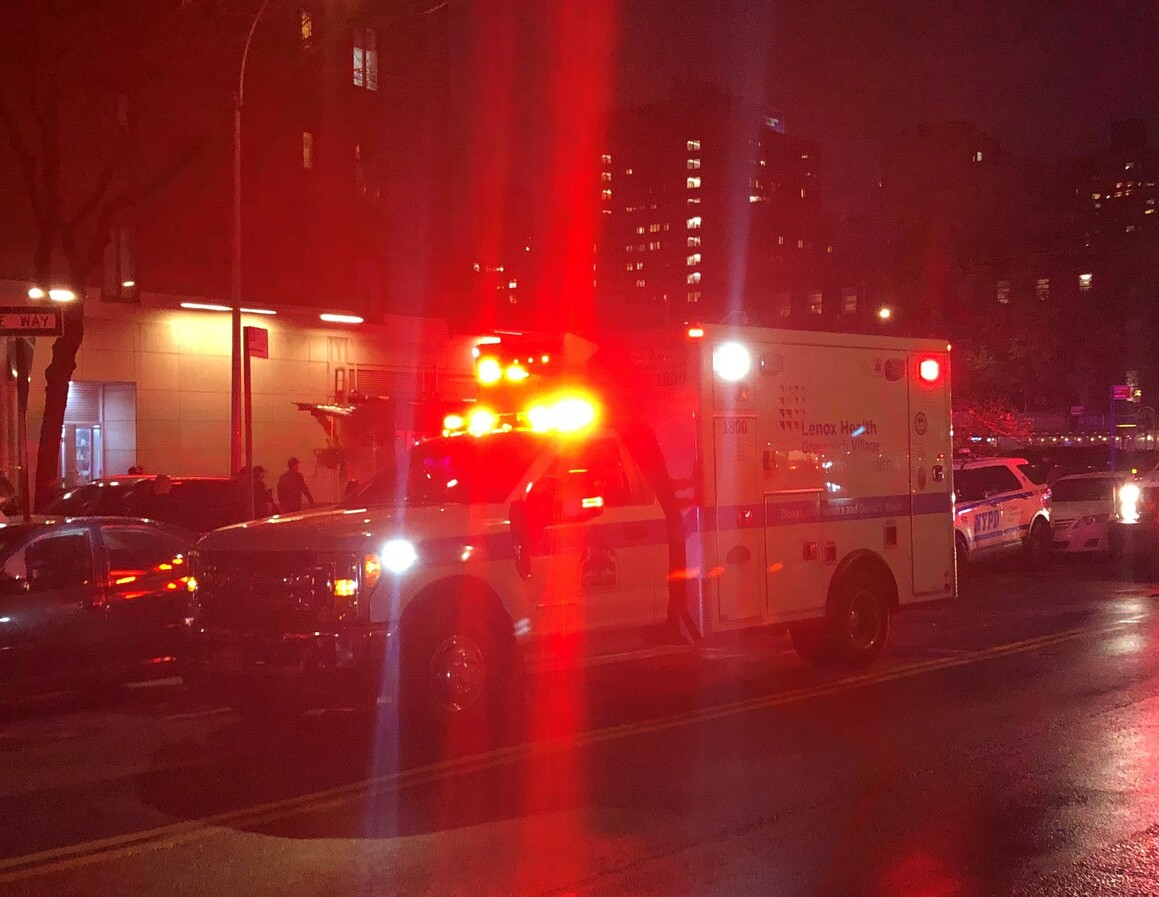 An amublance arrives at Stuyvesant Town in response to a call about a domestic incident. (Photo by Keith J. Kelly)

BY KEITH J. KELLY | There was a mini crime wave in the Stuyvestant Town area on Thursday. A shoplifter was detained at a hardware store and released. Another thief fled down First Avenue after holding up a 99-cent store at knifepoint across the street from the complex. And a domestic disturbance inside an apartment ended with a man being rolled away on an E.M.S. stretcher and charged with assault.

The man on the stretcher, who bystanders said was a resident of the sixth floor of 400 E. 20th St., reportedly had barricaded himself into an apartment where neighbors said he lived with his wife and a young child.

He appeared to be intoxicated. As he was being wheeled away, he said to The Village Sun photographer, “Who the f— is that taking my picture?”

There were ambulances and a heavy police presence, but officers did not deem it a dangerous situation to other residents as people were seen coming and going and deliverymen were still making deliveries.

Neighbors said they knew the man as “Richie.” The apartment was on the corner of First Avenue and E. 20th Street above the Hane sushi restaurant, whose main and outdoor shed portion were closed for renovation, so only a small takeout door was operating.

A police spokesperson said a report was filed for an assault at 6:45 p.m. inside 400 E. 20th St. A 54-year-old woman told police she was kicked in the left arm, causing redness and pain. Richard Debonis, 57, was removed to Bellevue Hospital and charged with assault.

Earlier that afternoon, employees at the Ace Hardware store, in a ground-floor storefront in Stuy Town near 18th Street and First Avenue, apprehended a would-be thief.

A passerby said the man in custody, with a variety of almost-stolen items on the ground at this feet was lamenting, “I’m sorry… . I don’t have a home or family. I just wanted to sell stuff.”

He was unarmed and was said to be trying to get away with items including kitchenware.

“They were probably worth less than $100,” said one Ace employee. Police on the scene said they released the foiled shoplifter because the store did not want to press charges.

Several hours later, a second thief struck across the street from Stuy Town in a 99-cent store. Police on the scene said the store clerk identified the thief as a black male, about 5 feet 8 inches tall and wearing a gray-and-tan hoodie, white jeans, white sneakers and a black fanny pack strung across his shoulder. Police on the scene said he was last seen heading south down First Avenue. He was said to have robbed the store armed with a knife.

One N.Y.P.D. officer responding to the domestic disturbance scene at 400 E. 20th St. commented, “It’s going to get worse in the summer.”