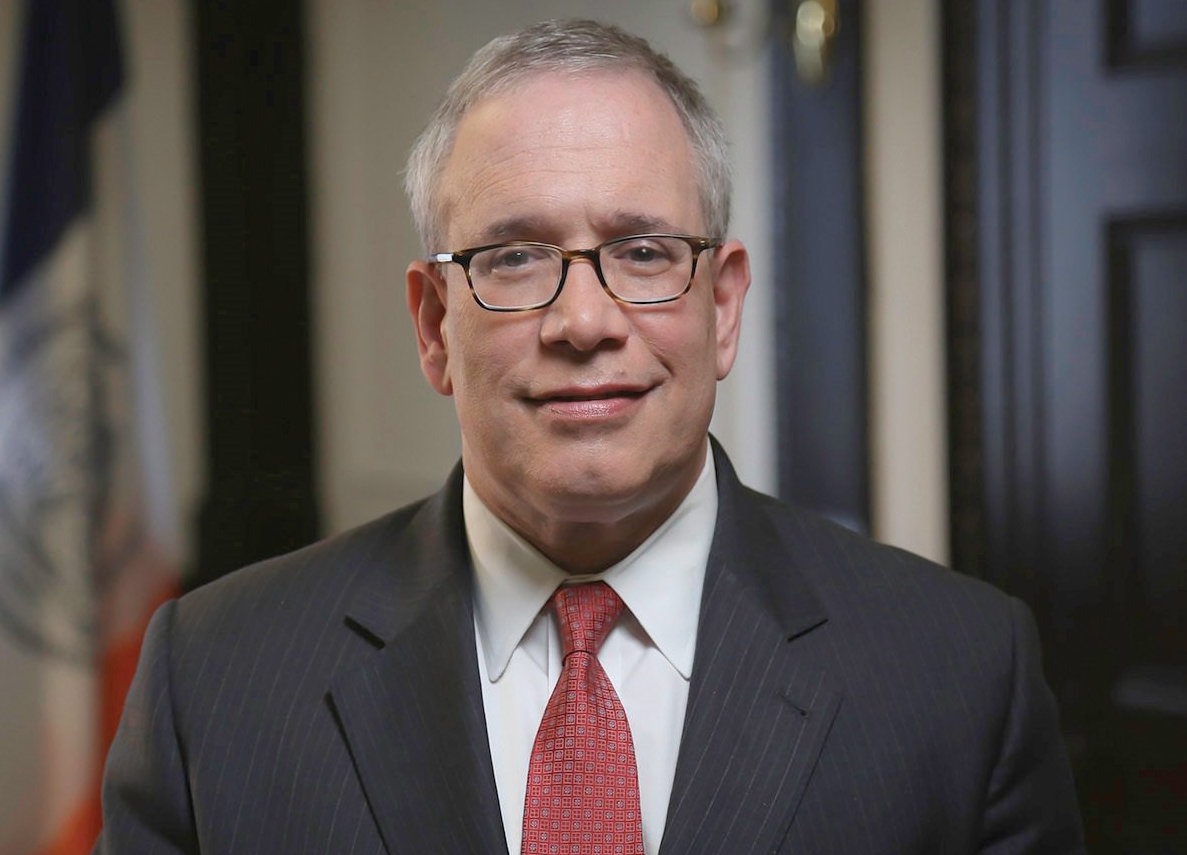 BY LINCOLN ANDERSON | Opponents piled on Scott Stringer on Wednesday after a woman came forward to accuse the comptroller of groping and pressuring her for sex 20 years ago.

However, other mayoral hopefuls didn’t go as far.

Kathryn Garcia called for Stringer to drop out of the race but not resign, adding that this shows, once again, that more women are needed in elected office.

Maya Wiley said, in part, that Stringer “must immediately account for this abuse of a campaign intern, including the unwanted advances and the dangling of jobs.”

Like Wiley, Dianne Morales, another Democratic contender, did not call for Stringer to drop out of the race, either.

“Right now, I’m not focused on Scott Stringer,” Morales said, in part, in a statement. “I’m focused on the woman of color who has to endure public scrutiny as she speaks her truth about the harm she’s experienced. … I stand with her, and her demands for justice.”

Eric Adams issued a succinct, four-sentence statement, saying, in part, “Women must be heard… . We must ensure that anyone who believes they were harassed, assaulted or treated in an unacceptable manner can come forward safely and be heard.”

Meanwhile, Andrew Yang’s wife, Evelyn Yang, expressed support for Stinger’s accuser, saying, “The truth matters. … No amount of gaslighting can take that away.”

Jean Kim, in a press conference Wednesday morning outside 1 Centre St., where Stringer’s government office is located, said she worked as an unpaid intern on the veteran politico’s 2001 public advocate campaign.

Kim, a 49-year-old Asian woman who is a lobbyist, said Stringer would grope her legs while they shared taxi rides to and from political events. She said he once kissed her and put his hand inside her pants and groped her, after which he allegedly warned her “not to tell anyone.” “Why won’t you f— me?” he repeatedly asked her, she claimed.  She also accused him of promising to make her the “first Asian district leader on the Upper West Side” if she would only give in to him.

Kim said she was introduced to Stringer through former Attorney General Eric Schneiderman, who invited her to get involved with their Upper West Side political club, Community Free Democrats. Congressmember Jerrold Nadler is also a member of the powerful club.

Coincidentally, on Tuesday, Schneiderman’s license to practice law was suspended for a year in response to multiple women’s allegations that he physically abused them, which forced his resignation from office in 2018.

Kim said she initially kept quiet about the incidents, fearful that speaking out could hurt her political career. Yet, because of Stringer’s alleged inappropriate behavior and harassment, she ultimately decided to leave Community Free Democrats and move across town to the East Side.

In an initial statement, Stringer said, “I firmly believe that all survivors of harassment have the right to come forward. I will reserve further comment until this person has had the opportunity to share their story. For now, let me say without equivocation: These allegations are untrue and do not reflect my interactions with anyone, including any woman or member of my staff.”

During a subsequent press conference Wednesday, after Kim had held her own one, Stringer, 60, elaborated that he had “an off-and-on consensual relationship” with Kim, and that she was not an intern on his 2001 campaign but a supporter who was working as a publicist at the time.

“She was a peer,” he stressed. “She was not — absolutely not — an intern on the campaign.

“For a several-month period around the time of the campaign, we had an on-and-off relationship over a few months,” he said. “She was 30 and I was 41. The relationship started and ended before I met my wife, Elyse.

“I believe it was a mutual, consensual relationship,” he said, adding the two “maintained an amicable relationship for many years afterwards, until 2013, when we could not find her a role on my campaign for comptroller.

“I believe women have the right, and should be encouraged, to come forward – and they must be heard,” Stringer said. “But this isn’t me. I didn’t do this. I am going to fight for the truth – because these allegations are false. The behavior described is inaccurate and completely antithetical to the way I have conducted my entire life.”

Meanwhile, Donovan issued one of the hardest-hitting responses.

“The allegations of sexual harassment and misconduct brought against Comptroller Stringer are credible, profoundly disturbing and deeply disappointing,” he said.

“When presented with allegations against Governor Cuomo, Mr. Stringer stated that, ‘We must have zero tolerance for sexual harassment, and we must end the pervasive culture of abuse in positions of power.’ I agreed with his statement then, and I agree with it now,” Donovan said. “As a man who has occupied positions of power, I know there is no such thing as a consensual relationship between a person in power and an intern. I commend Jean Kim’s courage to come forward and share her story. And part of supporting Jean Kim is to amplify her voice, and I do so by joining her call for Mr. Stringer to resign his office and withdraw his candidacy for mayor immediately.”

Foldenauer, though not as well known as the race’s frontrunners, does hold the top spot on the ballot in the June 22 Democratic mayoral primary.

“The failure of Eric Adams, Maya Wiley and Dianne Morales to call for Stringer’s immediate resignation is politics at its worst,” he railed. “Instead of calling for Stringer to immediately drop out of the race for mayor, these other candidates have instead issued generic statements with boilerplate references to women coming forward. In this #MeToo era, such vacuous grandstanding is insufficient and unacceptable.”

Locally, the Village Independent Democrats political club has endorsed Stringer for mayor. Mar Fitzgerald, one of the club’s co-presidents, did not immediately respond to a request for comment for this article.

However, District Leader Arthur Schwartz, a V.I.D. member and a candidate for City Council in the Third District, said the club should rescind its endorsement and that Stringer should step down. He said it was not the first time he had heard of Kim’s accusations.

“Jean Kim is known in the Manhattan political community as a straight shooter,” Schwartz said. “Having heard this story a dozen years ago, along with similar stories about Eric Schneiderman, and having worked with women who have been victimized by male politicians who think that power gives them license, I totally believe her. Scott Stringer should resign.

“More importantly for the political values of our community, the Village Independent Democrats, the Chelsea Reform Democrats and the Hell’s Kitchen Democrats must immediately rescind their endorsement of Scott Stringer, and, I suggest, support diversity in the office of mayor. I have endorsed Maya Wiley and Dianna Morales as 1-2 [in ranked-choice voting].”

“Can he survive? The answer is absolutely,” he said. “He’s Scott Stringer. He’s got two generations of connections who can vouch for him as a nonaggressor.”

He said the key for Stringer will be whether young politicians and voters on the left, whom he has cultivated with his recent political endorsements of progressive candidates, turn against him over this. State Senator Jessica Ramos has reportedly already rescinded her endorsement of Stringer while others, like Assemblymember Yuh-Line Niou, are said to be reconsidering their support.

As an experienced political observer, Sheinkopf actually suspects larger forces at work behind the accusation, which he called well-timed.

“It was as Stringer was rolling out his first ad,” he noted. “Whoever dropped this picked the timing well. This was an organized event to do the most damage, to stop his momentum. This is not an accident. My own experience of 40 years tells me they’ve got more negative information to dump — and timing is everything.”

As for why candidates like Wiley, Morales and Adams are not going after Stringer harder and calling for him to leave office, Sheinkopf said, “You want to leave him alone and let him take the beating.” Also, he said, the left establishment tends to go easier on each other.

On the other hand, after multiple women accused Governor Cuomo of unwanted sexual advances and creating a climate of sexual harassment, there was a tidal wave of calls from politicians for him to resign.

“Cuomo has been governor for 12 years and he had a lot of enemies,” Sheinkopf noted, “so they piled on him.”

As for why Donovan, in particular, is calling so forcefully for Stringer to resign, Sheinkopf said it’s because the two candidates are each vying to be the race’s “technocrat.”

“It’s because he needs to do something,” the consultant said. “His numbers haven’t been moving. He’s trying to fill up the technocrat hole — the expert — that Stringer tried to fill. You can only have one expert.”