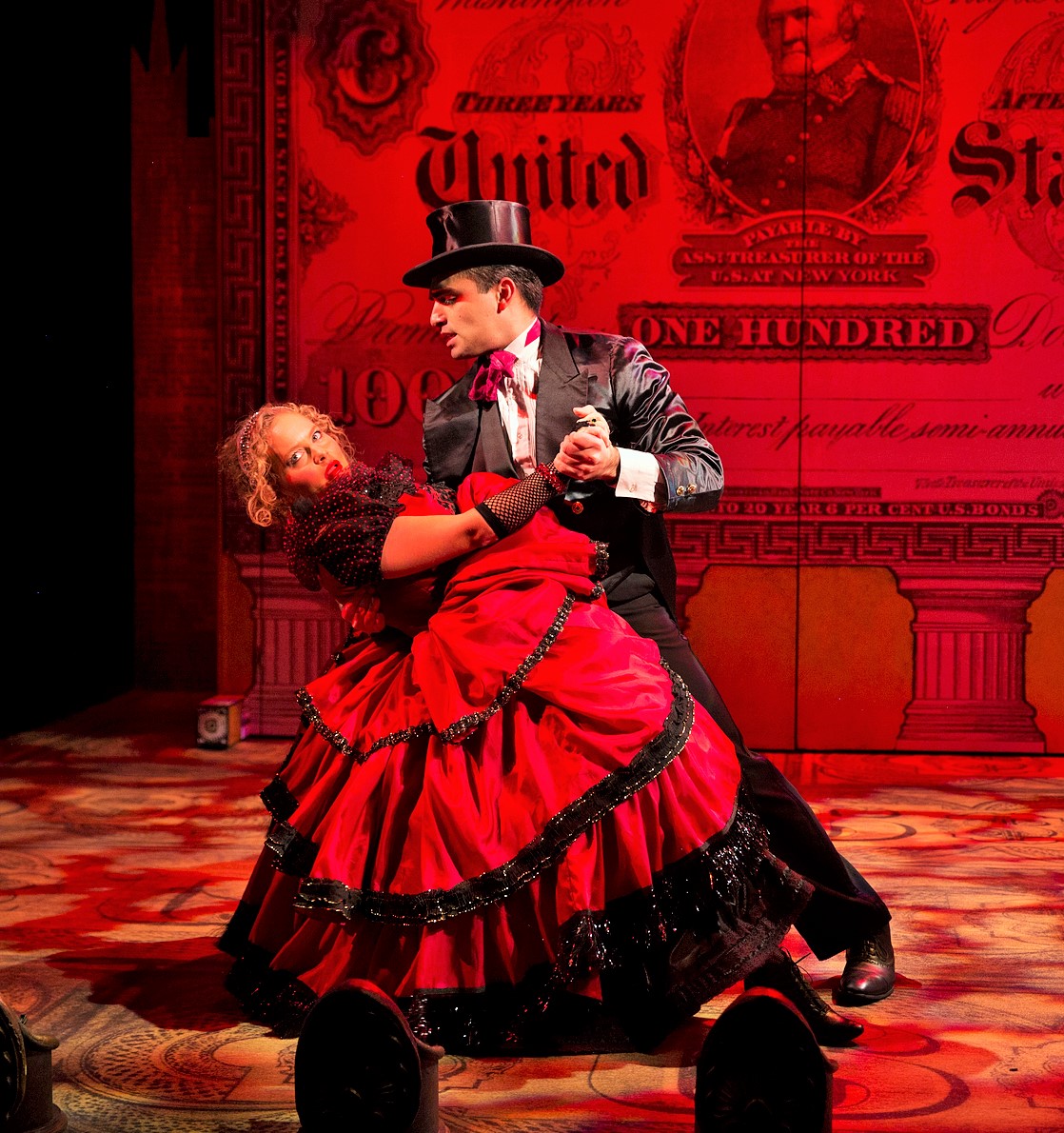 Amanda Jane Cooper and Daniel Maldonado in "The Streets of New York." (Photo by Carol Rosegg)

BY STEPHEN DiLAURO | There are possibly not enough adjectives to describe every performance and production element in the brilliant presentation of “The Streets of New York” on the Francis J. Greenburger mainstage at the newly renovated Irish Repertory Theater on W. 22nd Street in Chelsea.

It is as good as, if not better than, anything I’ve seen recently on reopened Broadway. Clearly, the performers are loving being in the show as much as the audience enjoys seeing it.

Based on “The Poor of New York,” a melodrama by the great 19th-century playwright Dion Boucicault, the production features the addition of a delightful score and witty and intelligent contemporary lyrics by Charlotte Moore, the artistic director at Irish Rep, who also adapted the original Boucicault play. This show was first staged in 2001. It opens with a company rendition of the original song “The Streets of New York.”

There are poor people and homeless people, rendered into their predicaments by a duplicitous Wall Street banker and avaricious landlord. The story relies on coincidences and chance meetings, as a melodrama so often will. While the genre of melodrama may seem dated and overwrought to contemporary audiences, when adapted into a book for a musical, at least in the case of “The Streets of New York,” it suits perfectly.

Its fraudulent banker, played with gusto and glee by Richard Hess, is a character that’s no stranger in today’s society. Then there’s the truly hilarious and glamorous musical comedienne Amanda Jane Cooper as his greedy daughter. Her first song, “Oh, How I Love Being Rich,” is performed with undeniable comic flair and had the audience laughing all the way through the tune. This performer has a string of previous credits that is sure to extend into a future as excellent as she is in this production.

The story begins with a prologue in 1837, with Bloodgood the banker stealing a dying sea captain’s fortune. The captain is played by Daniel J. Maldonado, who also plays the secret lover of the banker’s daughter — Duke Vlad. (That name conjures up the fact that Dion Boucicault is the only playwright to ever have a successful vampire play on Broadway.)

The tale picks up again 20 years later. The family of the sea captain — played by Amy Bodnar, Ryan Vona and Delaney Westfall with pitch-perfect performances — are living a penurious existence.

Of course, there are a couple of love stories. Ben Jacoby plays Mark Livingston, a young man from an upper-class family whose fortunes have taken a severe downturn. He is buffeted between the whims of the banker’s daughter and the defrauded daughter of the dead sea captain. The latter’s brother is infatuated with Dixie Puffy, played with charm and wit by the lovely Jordan Tyson.

Her mother and father are brought to life by the delightful players Polly McKie and Richard Henry. The Puffy family sing and dance their way through reduced circumstances enjoined upon them by the evil banker. All three are marvelous.

Justin Keyes also delivers an outstanding performance as Brendan Badger — the banker’s clerk, nemesis and the unlikely hero of the story.

There is a hidden document, a fire and plot twists galore. There is heroism, gallantry and joyous unions and reunions, and forgiveness at Christmas. This is grand entertainment throughout.

The musical ensemble is superb and puts a gentle wind in the sails of the easy-to-follow story, under the musical direction of Mark Hartman. Barry McNabb’s choreography is spot-on and the cast is in perfect step when they execute it.

A word about the scenic design by Hugh Landwehr: I’m not sure if it’s Dion Boucicault that inspires such magical sets, but the set at the Irish Repertory reminds me of an Abbey Theater production of the playwright’s “The Colleen Bawn” that I saw in Dublin a number of years ago.

All in all, if you love musical theater, this show gives all it’s got in service of making that love grow. Happy Holidaze!

DiLauro is a playwright, critic and musician.