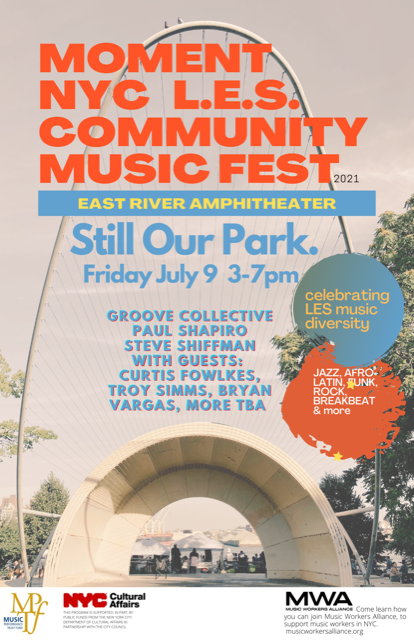 As the battle over the future of East River Park rages on, the park’s amphitheater will host a concert on Fri., July 9, from 3 p.m. to 7 p.m.

The Moment NYC L.E.S. Community Music Fest, with the slogan “Still Our Park,” will feature a diverse sampling of sounds, from jazz and Afro-Latin to rock and more.

Local activists, including the group East River Park ACTION, are fighting the city’s $1.45-billion East Side Coastal Resiliency plan, which would bury the existing park under eight to 10 feet of landfill to raise it above the floodplain.

Mayor de Blasio recently announced that, as part of an additional $140 million in city funding for the E.S.C.R. project, the city is now kicking in $4.83 million to replace the existing amphitheater.

Also part of that sum, the city is now allocating $5.8 million to build restrooms at Murphy Brothers Playground, at Avenue C and E. 17th St., plus $129 million to construct a “flyover bridge” for the pinch point on the East River bike path around E. 14th St.

The E.S.C.R. opponents, however, continue to fight the drastic resiliency megaproject and are appealing a prior ruling on their lawsuit that did not go their way. They support a previous resiliency plan that would not raise the whole park, but would instead create levee-like berms and floodwalls near the F.D.R. Drive.