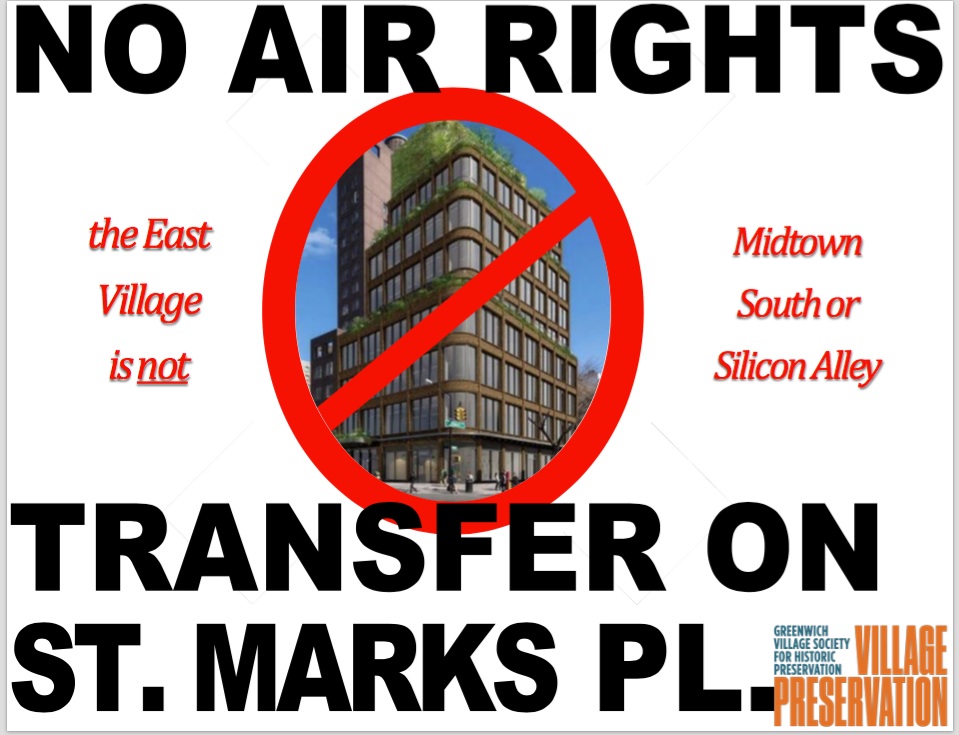 St. Mark’s Place tower would be a ‘gateway slug’

BY LINCOLN ANDERSON | A plan for an oversized office building at the gateway to the East Village got a thumbs-down from a key community board committee this week.

On Wed., Dec. 11, the Community Board 3 Land Use Committee voted unanimously to reject an air-rights application for the proposed building at 3 St. Mark’s Place.

Village Preservation — formerly the Greenwich Village Society for Historic Preservation — has been leading the opposition to the oversized project. The use of air rights — technically known as development rights — from a landmarked property across the street would allow construction of a building 20 percent larger than normally allowed at the site, at the northeast corner of Third Ave. and St. Mark’s Place.

The site — which has been razed — was formerly home to a corner cigar-and-magazines store, a Korilla Korean sandwich shop, a McDonald’s and Trigger’s Continental cheap-shots bar.

Village Preservation brought about 50 people to the meeting despite the cold, plus a last-minute, without-notice relocation: When people showed up at the Meltzer Center, on E. First St., they were greeted by a sign telling them the meeting had been moved to the C.B. 3 office, on E. Fourth St.

Every member of the public who spoke at the meeting testified against the project. Many decried the loss of the historic building that contained the Korilla shop — which had residential units above — for a so-called “boutique” office tower. There was also outrage that an office tower would even go up there at all.

Under the plan, in return for modest additional restoration work at 4 St. Mark’s Place — the landmarked Hamilton Holly House across the street — the developer would get a 20 percent increase in size for the 3 St. Mark’s project. The F.A.R. (floor-area ratio) would be boosted from 6 to 7.2, meaning the building would have more floor space, increasing its overall bulk.

This maneuver is specific for air-rights transfers from individual landmarks, like 4 St. Mark’s. Namely, the air rights can only be transferred across the street — which normally can’t be done — if, as part of the deal, some of the profit from the air-rights sale goes toward restoring the landmark. In this case, 5 percent of the profit would.

Only in a few other rare cases — such as involving special districts — can air rights can be transferred across a street.

While Village Preservation obviously supports restoring landmarks, the group actually does not back the “preservation” part of this plan. Under the proposal, “fancier materials” would be used to make Hamilton Holly House look more like it did in the 1830s. But, in the view of Village Preservation, the East Village structure’s current timeworn look is “fine” — plus, not worth the tradeoff of having a 20 percent larger office building across the street.

The overriding issue for Village Preservation is that a big, bland project like this is inappropriate for the gateway to the East Village. According to the group, allowing a large office tower there would increase pressure to turn the area into an “extension of Midtown South and Silicon Alley.”

Village Preservation has raised the alarm about the spread of tech office buildings in the East Village and along Broadway in Noho. IBM Watson is the anchor tenant in the mirrored-glass building at 51 Astor Place, a.k.a. “The Death Star.” Meanwhile, the new city-backed Tech Hub is currently rising at the former P.C. Richard & Son site on E. 14th St. between Third and Fourth Aves. On the West Side, in Hudson Square, Google is creating a huge new campus in the former St. John’s Terminal building, which is being vertically enlarged, at W. Houston and Washington Sts., and also taking space in nearby existing buildings.

City Councilmember Carlina Rivera’s position will determine whether the 3 St. Mark’s Place air-rights transfer is O.K.’d since the Council’s other members always defer to the member in whose district a project is located. Rivera reportedly has not yet publicly stated her position on the scheme.

The city’s Landmarks Preservation Commission approved the project in June — over the objections, though, of C.B. 3, Manhattan Borough President Gale Brewer, state Senator Brad Hoylman and Assemblymember Deborah Glick. Meanwhile, a Rivera staff member testified at the L.P.C. vote, only saying that the councilmember was “monitoring” the situation with the project.

Now the developer’s application has moved into the ULURP (Uniform Land Use Review Procedure) phase. A lengthy process, ULURP usually lasts around seven months, and involves binding votes by the City Planning Commission and City Council.

Village Preservation expects City Planning to approve the proposal. Notably, the lobbyist for the project is Kramer Levin, the same law firm Mayor de Blasio hired to defend himself in his campaign-ethics investigations.

Wrapping up its role in the ULURP process, the full board of C.B. 3 will vote on the issue at its Dec. 18 meeting. As opposed to the votes by City Planning and the Council, though, the board’s vote is advisory only — as in, not binding.

Andrew Berman, executive director of Village Preservation, told The Village Sun his organization is grateful the East Village community board is continuing to oppose the project — and that they hope Councilmember Rivera will now follow suit.

“We’re deeply gratified that Community Board 3’s Land Use Committee stood firmly with the community in opposing the air-rights transfer plan,” he said. “The modest restoration work on 4 St. Mark’s Place and the small changes to the design of the planned new office building at 3 St. Mark’s Place are the proverbial rearranging of the deck chairs on the Titanic, whereas the creeping ‘Midtown South’-ification of this neighborhood is the iceberg we really need to avoid.

“Allowing this office tower to increase in size by 20 percent will only accelerate the change in this neighborhood’s character from lively residential and retail mix to Silicon Alley office park,” Berman added. “With the Tech Hub coming in on 14th St., we are seeing more and more pressure on this area to become an extension of the central business district. We expect the City Planning Commission will likely approve this air-rights transfer plan, and that, ultimately, this will come down to Carlina Rivera and the City Council. We hope she will listen to her constituents and vote No, and bring her colleagues on the Council along with her.”

Village Preservation is directing people to write to Rivera, urging her to oppose the oversized project. So far, several hundred people have done so. The group intends to keep up the pressure.

The Village Sun has reached out to Rivera for comment and will update this article pending a response.