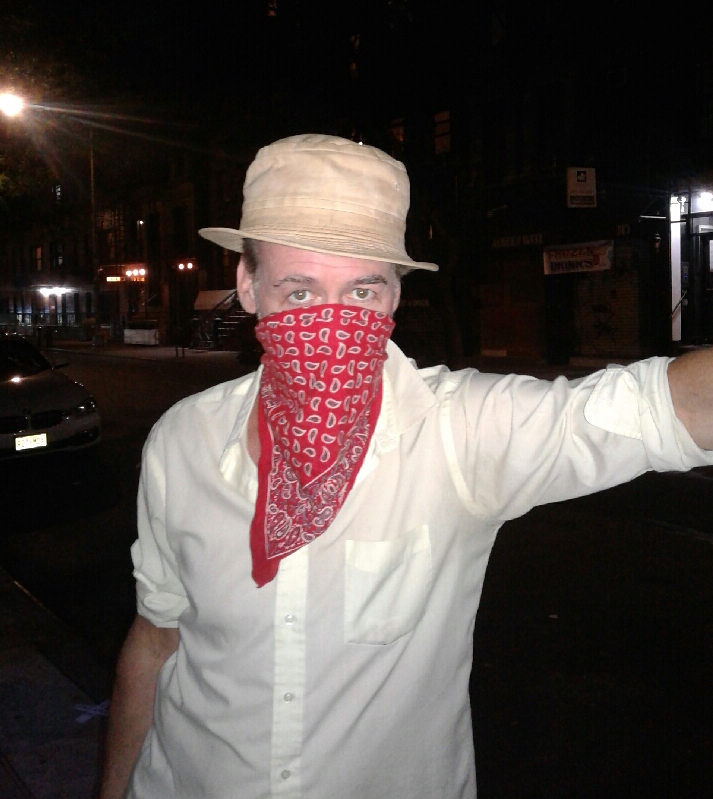 Gerard, the owner of East Village Social, said he doesn't want to cross the governor. (Photo by The Village Sun)

St. Mark’s bar owner: It was kind of a perfect storm

BY THE VILLAGE SUN | Things were quiet on St. Mark’s Place Monday night.

It was a big change from Friday evening, when great weather and liberation from the lockdown had combined to turn St. Mark’s into  a pandemic-denying version of Bourbon St.

Hundreds of revelers drinking on the sidewalks and in the street amid the ongoing coronavirus crisis — mostly without masks or social distancing — were captured on video that, fittingly, “went viral.”

Outraged, Governor Cuomo on Sunday threatened to “reverse” Manhattan’s reopening of June 8 and reimpose the shutdown if bars and, as he put it, “local government” don’t enforce responsible behavior.

Cuomo warned that he’s “not kidding,” and that operators who let crowds gather unsafely outside their places also risk losing their liquor licenses.

But around 9:20 p.m. Monday, the street was mostly empty. There were just a few people hanging out around East Village Social, on St. Mark’s between First Ave. and Avenue A.

Among them was the bar’s owner, who goes by Gerard.

For years, he was the director of operations at Webster Hall. He takes credit for having improved the club’s live music.

Gerard stressed that he intends to stay in business and doesn’t want to cross Cuomo. Asked to explain what happened on Friday, he spoke freely.

“It was kind of a perfect storm,” he told The Village Sun. “It was a beautiful day. We’ve all been ‘locked up.’ And we’ve been very good listening to the government. …”

Prefacing his next remarks, he noted he’s not a scientist.

“The virus isn’t as ubiquitous,” he maintained. “It’s not everywhere, as it was. It’s not as strong as it was. New Yorkers are smart. We kind of figured out it’s not as dangerous anymore. … And you’ve got 10,000 people protesting but we’re all cooped up?”

At the same time, he said, he definitely heard Cuomo’s warning loud and clear.

“I’d be foolish to argue with the governor,” he said. “He could ruin my life.”

The Friday crowd just got a bit out of hand, the bar owner admitted.

“As I said today in my interview with Bloomberg [News] — it became bigger than me,” he said.

By that, he meant, that neighboring bars were also fueling the crowd.

As for why it was so quiet Monday night, Gerard didn’t necessarily chalk it up to Cuomo’s tough talk the day before.

Two neighboring places that had helped fuel the weekend’s boozy bacchanalia, Bua and Augurs Well, were closed Monday. Gerard said Bua usually is only open later in the week.

A sign above East Village Social’s front door warns customers to adhere to the guidelines of the Centers for Disease Control and Prevention, New York State and the State Liquor Authority. On the sidewalk, white-taped “X”’s and numbers mark where customers picking up to-go orders should wait.

“And Alina has the bullhorn,” if people need a reminder to socially distance, Gerard added, referring to a staffer manning the takeout window.

East Village Social reopened May 1. Known for its music, during the pandemic the bar’s regular bands have been playing on the sidewalk in front of the place.

In early May, people were hanging out on chairs on the sidewalk across the street listening to the music, while others stood closer to the bar.

“I feel we’re performing a public service,” he said. “We’re not making any money on this. And the risk that we’re taking, it’s a little foolish,” he conceded.

The watering hole’s eighth anniversary is coming up this week, on Fri., June 19. Normally, that would be an occasion to celebrate. But these aren’t normal times — yet. We’re still only in Phase One of the reopening.

“Listen, I have to be very careful,” Gerard reiterated. “We have to survive.”

He assured, though, there will be plenty of other days for the bar to celebrate, like Cinco de Mayo, Easter and St. Patrick’s Day.

Christian Resseguie, an editor who lives nearby, had his to-go cup — and some opinions he was eager to share.

“I enjoy the bar,” he said of East Village Social. “I enjoy the vibe. It’s sort of bringing life back to the city.”

Meanwhile, in his view, the naysayers are just getting off on feeling morally superior. And, he said, some were likely just anti-bar all along, even before COVID-19.

“It feels like there are a lot of arbiters of morality out there,” he said, “pointing and saying, ‘You can’t do that.’