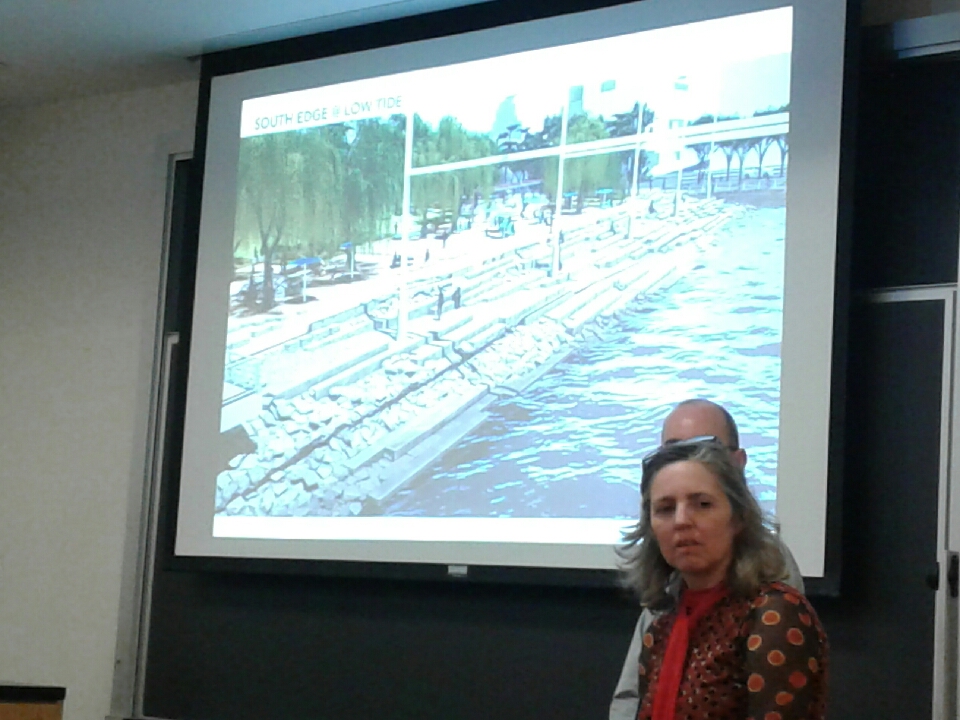 Sports leagues push for heated Gansevoort field; But what about the owls?

BY LINCOLN ANDERSON | Architects presented the final design concept for the new park on Gansevoort Peninsula to Community Board 2’s Parks and Waterfront Committee on Wednesday night.

Under the plan, the 5.7-acre peninsula, located just west of the Meatpacking District, is slated to get a large soccer field, a dog run, a rocky “beach” area, an outdoor gym, restrooms and a small concession stand.

The soccer field, which will cover most of Gansevoort, will be artificial turf and measure 316 feet by 220 feet. It will have a 1-degree slope from its center point down to its edges, which is standard and will allow it to drain.

Members of the Downtown United Soccer Club, a local youth league, said they hoped the field would be available for year-round use, and suggested adding a bubble. But the architects said it would be “too costly,” and that installing “the footings” for the structure would be prohibitive.

Dan Miller, a C.B. 2 member who is a past president of the Greenwich Village Little League, pitched the idea of heating the field in the winter — which would keep snow from accumulating — an idea that was seconded by a DUSC parent. Again, the answer came that it would be unfeasible, in this case due to the energy costs involved.

In response to a question about who would clear snow off of Gansevoort, Noreen Doyle, the Hudson River Park Trust’s executive vice president, said the Trust would not do it, and that some people might like snow in the park, such as for cross-country skiing.

“We don’t remove snow from fields,” she noted.

Miller also asked about the issue of foul balls when the field would be used for baseball, since the design locates home plate at Gansevoort’s southeast corner. He was reassured that there would be a baseball backstop with an overhang, as well as 16-foot-high fencing around the field, which would keep baseballs and soccer balls from flying out onto the adjacent bike path and highway.

Meanwhile, in response to the community’s requests at previous meetings, the riprap — large, jetty-like boulders — that currently lines the southern edge of Gansevoort will be softened with areas of flat stone, which will allow people to walk on them and sit near the water.

The design of a ramp leading down to the water on the peninsula’s southern edge — that could be used to launch small boats like kayaks — was also revised to include a less slippery surface, and should be easier to access at all tides.

Some community members suspect the reason more trees and foliage aren’t included in the southern edge’s design is because of David Hammons’s “Day’s Edge” sculpture, which will sit prominently in the water at that spot, right off of the peninsula. But one of the architects explained there is actually a 20-foot easement for the Spectra high-pressure gas pipeline that runs underneath Gansevoort, within which no trees can be planted.

Doyle noted that she knows “everyone thinks” the high-profile sculpture — which is being sponsored by the Whitney Museum, located directly on the other side of the highway from Gansevoort — is influencing the lack of foliage in that spot, but it’s just not true.

She added there will also be “driftwoody,” tree trunk-like sculptures on the riprap that children will be able to climb and scramble on.

C.B. 2 member Jonathan Geballe voiced concern that there would be obtrusively large signage on the southern edge warning people to stay out of the water.

However, the Trust’s Doyle added, “We’ve been sued by people whose dogs jumped into the water. Some kind of signage is unavoidable. That said, the last thing we want to do is have billboard-size signage.”

Since it will get blazing hot out on the peninsula in the summer, the park will also include two water misters — one for the soccer field and one for the outdoor gym area, which joggers can use — as well as a combination water fountain / mister for the dog run.

Gansevoort will also include three small, one-story buildings on its eastern edge, which will include restrooms, a small concessions kiosk and a space for storage / maintenance and operations. These buildings will be mostly opaque — lacking windows — but lighting and perforations will be used to help make them seem less dense. There will be a single concrete-slab roof spanning all of them. This roof will have holes, from which rainwater will drain down onto green rooftops on each structure. The men’s restroom will have two stalls and two urinals and the women’s restroom will have three stalls.

In contrast to the sports parents, Lynn Pacifico, a West Village dog-owner activist and an environmentalist, encouraged the development of the peninsula as a natural habitat. She said that a pine grove should be added to attract owls, which would control the rats. One of the architects noted there actually will be pine trees, at the site’s southeastern corner.

Another man said he would like to see more pigeons in Hudson River Park, as opposed to just seagulls. Doyle said the Trust does track the bird species in the park, but there were no immediate answers on how to induce more pigeons to use the park.

Speaking of birds, after the meeting, Pacifico showed The Village Sun an owl “pellet” that her dog Pax found under a lamppost by Pier 46, the Charles St. Pier, two years ago during the migratory bird season. The furry-looking gray tuft is regurgitated by an owl after eating a rat or mouse, she explained.

“Pax alerted me,” she said. “I’d been looking for one for years.”

Unlike the other piers in Hudson River Park — which stretches between Chambers and 59th Sts. — Gansevoort offers the opportunity to have a lot of foliage and trees since it is actually land, a remnant of landfill that once stretched out to a 13th Ave. The swath of landfill formerly stretched all the way up to 29th St., but was cut back in the early 20th century as ships became larger. Because Gansevoort was historically an outdoor market area — known as the West Washington Market — it was spared during the cutback. But then refrigerated supermarkets came along and killed the outdoor market, which was demolished in 1954.

On the subject of dogs and the beach area, Pacifico added that labs are, in fact, the most popular family dog and they are “water dogs.”

She also lamented the fact that the prime piece of actual land would be covered by “plastic.”

The question also was raised about whether the peninsula would have a marine waste-transfer station. Under the Bloomberg administration, the state Legislature allowed a plan under which 60 garbage trucks per day would have plied the peninsula, dumping recyclables onto barges that would then set sail to a recycling plant in Brooklyn. The plan was hailed as a way to get garbage trucks off of the streets, though Villagers mostly opposed it.

The Trust wanted $50 million from the city and state in order to “alienate” part of the property from park use for the recycling-related operation. But the state never agreed to fund its half of the funds for what it felt was a city use, and the idea appears to have faded.

Doyle said the Trust is moving forward with creating the park, and if the transfer station re-emerges, then the road to the fireboat station at Gansevoort’s northwestern corner could be used by the garbage trucks. After its outdoor market days were over, Gansevoort formerly did have a marine waste-transfer system, as well as a trash incinerator known as the Gansevoort Destructor. More recently, the former incinerator and peninsula were used by the Department of Sanitation as a garage and parking lot for garbage trucks, as well for storing road salt. But several years ago, after being forced by a lawsuit to do so, Sanitation vacated Gansevoort for a brand-new garage at Spring and Washington Sts.

Construction on the park at Gansevoort is expected to start in fall of this year and finish in 2022.

Meanwhile, the local sports leagues reportedly are not planning to give up so quickly on the idea of making the field playable year-round.

“I don’t think we’ve heard the last from the leagues regarding a heated field,” a source told The Village Sun after the meeting. “Considering the value of the property, we need to figure out the cost to heat the surface to make it playable 12 months a year. Rather than say no, I think the leagues would like to see a study using renewable solar energy sources to heat the field. The technology exists. I think the Trust should consider the option before rejecting the suggestion.”