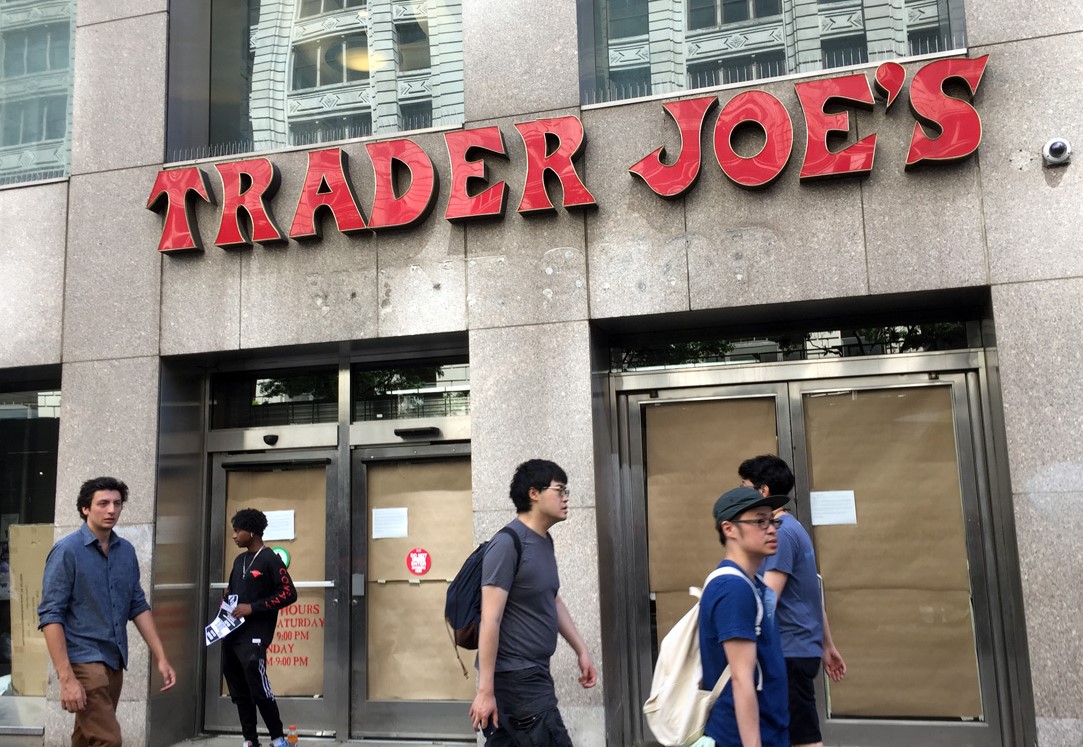 No wine, no sign: Trader Joe's removed the words "WINE SHOP" from the signage of its former alcohol outlet at Union Square. (Photo by Jefferson Siegel)

BY LINCOLN ANDERSON | Following the closure of the Trader Joe’s Wine Shop near Union Square, a Trader Joe’s source filled The Village Sun in on exactly how the popular oulet’s end went down — and charged that it was a union-busting move.

Thanks to a tip from reader Gail Fox, this newspaper was among the first to report the wine shop’s sudden shuttering. The employee, in turn, posted a reader comment on the article, saying that TJ’s wanted to nip the worker-organizing effort in the bud. The Village Sun reached out to him for more details and he promptly responded the next day. However, unfortunately, due to a technical e-mail glitch, the newspaper did not see his response until one week later.

It wasn’t immediately clear in what capacity the employee works for Trader Joe’s or where he is located. However, he described a detailed version of events.

In addition, he tellingly placed the incident within the wider context of a wave of unionizing efforts currently rocking the expansive Trader Joe’s empire.

Here, below, is his response in full. The employee requested anonymity since he, again, still works for the national chain store:

“Employees were actively collecting signatures to file a petition for a union election. With a relatively small staff and only 30% necessary to file, this was a forgone conclusion. Once a location has formally begun the process of seeking a union vote — in this case, filed a petition with the NLRB [National Labor Relations Board] — it is against federal law for the business to close that location to inhibit union activity at other locations. Given that Trader Joe’s just had its first store unionize last month, has a second store voting today [Aug. 12] and a third scheduling their vote, they decided to close the store outright by email at 12:01 a.m. to prevent any chance that a petition could be filed. Likely on the counsel of their law firm specializing in anti-union activity, they realized they could use this as an opportunity to legally threaten any store considering unionization by preemptively closing the store and terminating all employees. (Note that current [wine shop] staff are only given the option to meet and discuss a transfer [to another TJ’s store] — not guaranteed employment). Given the current staff shortages at all NYC locations, we know this is code for termination of any pro-union employees. As I am a current employee, I would prefer to remain anonymous. I will try to get one of the staff to contact you directly.”

Per a New York State law that limits corporations to having only one liquor store, this was TJ’s only alcohol outlet in the state.

Along those lines, signs posted on the shop’s doors the day of its closing, stated that that TJ’s wants to “optimize the potential” of its sole New York State wine and liquor license by finding the best possible store location. However, one would be hard pressed to find a more bustling commercial spot — both convenient to local shoppers and near one of the city’s major transit hubs — than Union Square.

Meanwhile, Trader Joe’s has been sticking to its “optimize our license” line in the wake of the oenophile mecca’s closing.

“Trader Joe’s respects our crew’s right to support a union — or not,” a spokesperson told Gothamist. “Our decision to close the Union Square wine shop resulted from a long-term review of how best to optimize our one and only license to sell wine in New York State, and to best meet the needs of our grocery customers in the neighborhood.”

The wine shop space and the neighboring Trader Joe’s market are located on the ground floor of New York University’s Palladium Hall, the city of the former Palladium disco and music venue. Following the alcohol outlet’s closing, the words “WINE SHOP” have been removed from its exterior signage. TJ’s reportedly plans to use the space to support the adjacent market.

In a statement to the media, N.Y.U. spokeseperson John Beckman said, “There’s been no change in N.Y.U.’s lease with Trader Joe’s, and it has several more years to run. The closure of the wine shop is a decision Trader Joe’s made independently and internally.”

Asked by The Village Sun if the N.Y.U. administration is concerned that the seemingly anti-union shuttering “reflects poorly on the university,” Beckman reiterated that N.Y.U. had nothing to do with the store’s closing.