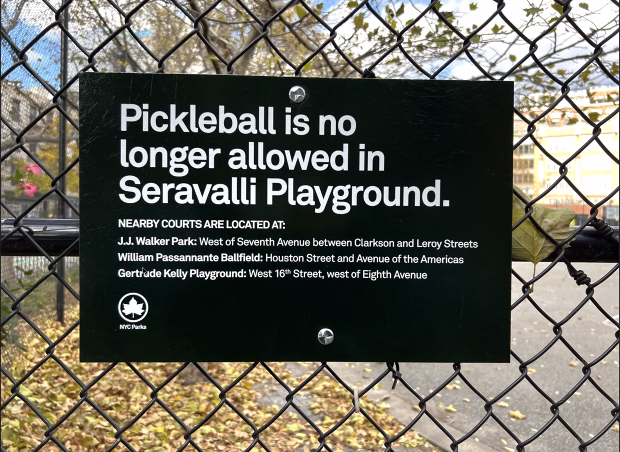 BY LINCOLN ANDERSON | Score one for local parents and kids — at least those who aren’t totally addicted to pickleball yet.

On Wednesday, the Parks Department announced that Seravalli Playground in the West Village is now off limits for the fast-growing racket sport.

The news follows an intense October meeting of the Community Board 2 Parks and Waterfront Committee, at which local parents turned out in force, armed with a petition with more than 3,000 signatures — backed by local youth sports leagues — opposing pickleball at the Horatio Street play spot. Anthony Perez, the new Manhattan borough Parks commissioner, personally took an active interest in the issue and attended the meeting.

On Wednesday, Terese Flores, a Parks Manhattan regional manager, reported back to the C.B. 2 committee that the department had rendered its verdict: no more pickleball at Seravalli. Not even the two “official” courts that Parks had surreptitiously painted lines for in the playground are staying.

However, the army of pickleballers that played at Seravalli aren’t going down without swinging. It’s inaccurate to say they’re only half-sour about the loss of the playground — they’re fully sour. They continued to argue at the meeting that Seravalli is largely “underutilized” during much of the day, particularly on weekdays.

A total of 61 people attended, which is a pretty large turnout for a community board committee meeting.

“The park is empty 75 percent of all the open hours during the week,” one of them said.

In addition, they claim the new courts at J.J. Walker are slippery, cracked and have “dead spots.”

But Flores said the J.J. Walker courts are perfect because they are “enclosed” by walls, so the pickleball players won’t have the problem of their games spilling into other uses in the playground or vice versa, as happened at Servalli, which is a wide-open, unprogrammed space.

Some of the pickleball players asked why Parks, instead of a total ban, couldn’t just restrict pickleball to certain hours at Seravalli, which they proposed could be enforced by a Parks employee.

However, Flores responded that it was a manpower issue, saying, “We didn’t have the enforcement level” for that.
One pickleball advocate suggested the players could even help raise funds themselves to pay for a pickleball monitor: “Why not work with us to come up with the funds?” he said.

Katherine Hedden, the official pickleball ambassador for Manhattan, stated, “We were extremely disappointed about Seravalli because it was underutilized at certain hours.”

She, however, noted that Passannante Playground, at Houston Street and Sixth Avenue, will be resurfaced and that it looks like Parks will at least keep the two “official” courts that are marked on the blacktop there now and possibly add two more.

Hedden added that pickleballers are now also targeting Vesuvio Playground, at Thompson and Spring Streets, as another new spot for the sport. Again, she said, handball courts at Vesuvio are “underutilized.” So perhaps residents living near Vesuvio could soon start hearing the incessant pinging of pickleballs, too.

At the same time, Hedden acknowledged that the game had gotten out of hand at Servalli, noting how she was called down to the court one weekend in mid-September to find 13 other courts had been set up beyond the two Parks-sanctioned ones, dominating nearly the entire space.

But going down to zero courts was not the right call, the players said.

“We jumped from this anarchy to complete fascism where there’s no pickleball,” complained Max Balka. He noted that the group of regular players at Seravalli was 1,500 to 2,000 strong.

While Hedden has said part of pickleball’s popularity is due to how portable the nets are, one woman complained that it’s hard to lug a 20-pound net around to courts that will now be farther away than Seravalli.

However, Ken Blacklow, who has been one of the leaders of the Seravalli anti-pickleball resistance, said despite having “a bum knee,” he finds it very easy to walk to Passannante.

“I myself do play pickleball but it was not really compatible with a shared space,” he said of Seravalli Playground.

Bill Doody advocated for pickleball being played at the W. Fourth Street handball courts, feeling it could displace some other uses there, like, he claimed, gambling.

Rich Caccappolo, the C.B. 2 Parks and Waterfront Committee chairperson, conceded that it was a tough decision.

“I think we all agree that a high degree of utilization is a goal we want for all park spaces,” he said. “It wasn’t a perfect solution.”

Coral Dawson, a C.B. 2 member, suggested some other possible spots for pickleball courts, such as Key Park, in the middle of the Washington Square Village complex. It’s possible, though, that New York University faculty living there would not exactly appreciate the constant pinging of pickleballs in their leafy enclave, but perhaps — who knows? — they’re already devotees of the fast-spreading sport, too.

Speaking to The Village Sun afterward, Caccappolo again expressed some regret over the outcome.

“The backlash was too strong,” he said of the Servalli anti-pickleball pushback. “I think we all wish or want there to be great utilization of the space.”

Speaking to The Village Sun a couple of months ago, Hedden said, “I think that the parents need to learn to coexist [with pickleball]. And it’s the pickleballers’ view that we can coexist. I think we can agree that it was out of control,” she said of Seravalli.

But asked if pickleballers, on their end, could do more to cut down on the noise, for example, such as by using noiseless balls (which do exist), she balked.

“I think that complaining about noise in New York City is a little much,” she contended. “When you talk about cars honking and dogs barking, it’s a bit much.”

Yet, she acknowledged that in Ridgewood, N.J., due to complaints, they have installed soundproof screens around pickleball courts. And locally, in Stuyvesant Town, which has pickleball courts, they have some restrictions to keep the racket sport’s racket from excessively impacting residents’ lives.

“In Stuy Town they made it that you can’t start playing pickleball until 9 a.m.,” she noted, “because it’s in the middle of a huge complex.”

Meanwhile, Blacklow said the “picklers” should have nothing to gripe about, since they wound up with two more official courts through the process.

“It’s hard to sympathize with this group when they get incrementally more dedicated courts than they had,” he said, “yet they complain about how this is unfair.”