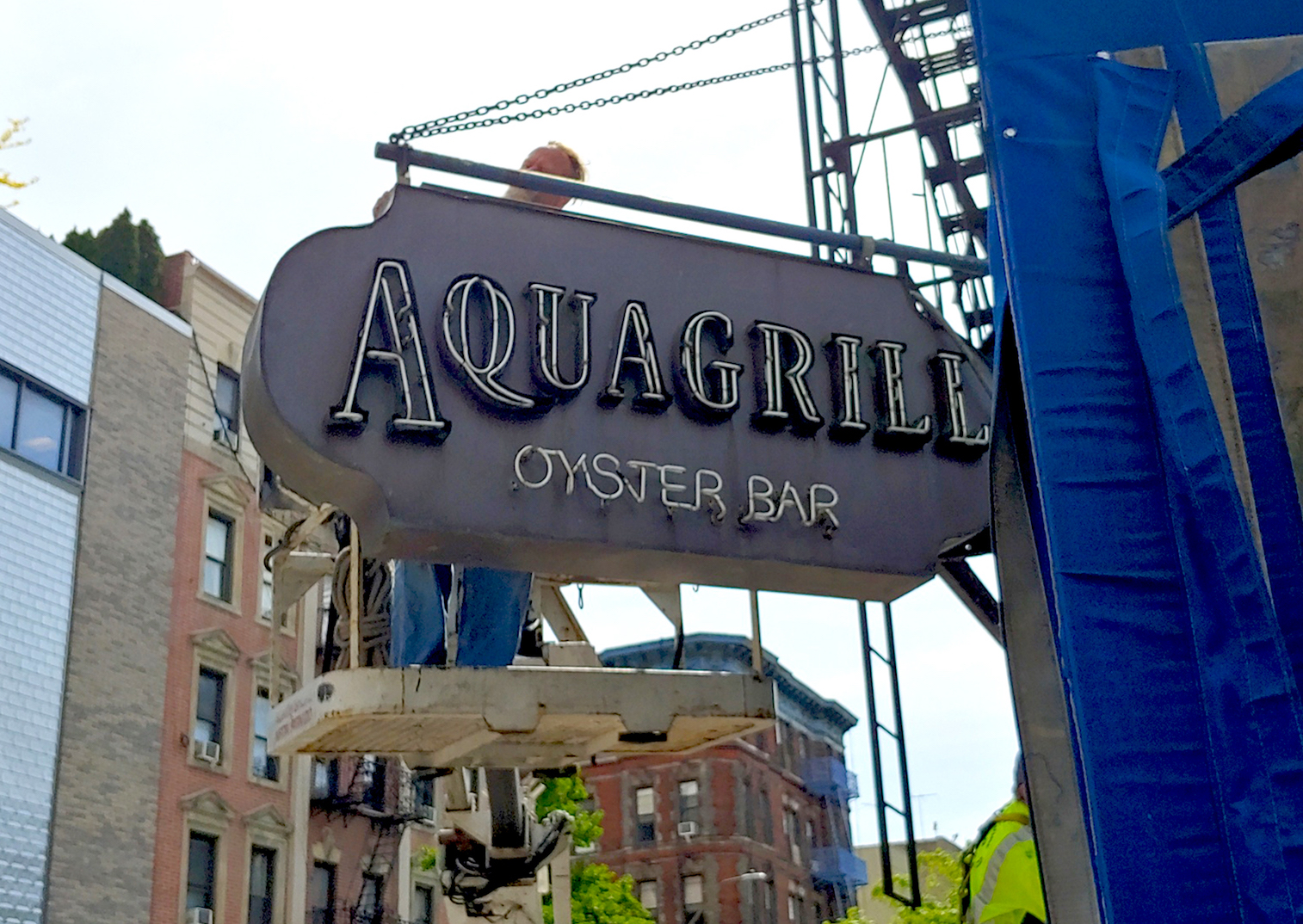 BY THE VILLAGE SUN | Aquagrill swims with the fishes.

After 24 years as one of the city’s top seafood restaurants, the legendary Soho eatery recently closed for good.

Workers recently took down its iconic sign — whose neon lettering was, fittingly, an ocean-like light-blue.

The pricey restaurant was unable to hang on through the coronavirus pandemic by offering takeout. As one local put it, it was not known as “a takeout-kind of place” but for fine dining.

Founded by Jeremy and Jennifer Marshall, Aquagrill anchored the southeastern corner of Spring St. and Sixth Ave. for more than two decades. When the Downtown eatery first opened, Bill Clinton was still president, the O.J. Simpson trial was beginning and the Fox News Chanel was being launched.

“Eat Oysters – Love Longer,” a tagline on the menu urged.

Ed Koch and his “Koch Klatch” — former members of his administration and political confidants — enjoyed dining and schmoozing there together weekly.

Celebrities like Robert Redford and Dan Ackroyd were often spotted dining on the outdoor deck.

In 2017, Zagat ranked Aquagrill among its Top 50 Best Restaurants in New York City, as well as dubbing it the city’s Best Brunch, Best Oyster Raw Bar and Best Seafood Restaurant.

In its review of Aquagrill, Zagat said: “A ‘mainstay’ for ‘consistently excellent’ seafood, this SoHo ‘institution’ offers ‘perfectly cooked’ fish and ‘super-fresh’ oysters, plus a ‘fabulous’ brunch; if the ‘low-key’ dining room is ‘showing its age’ service remains ‘seamless’ and the seasonal patio is a ‘delight.'”

Restaurant critic Ruth Reichl reviewed Aquagrill in The New York Times in 1996 after its opening. She enjoyed its “comfortable” neighborhood feel and “refreshingly original” fare, including bite-size “snail snaps” — popovers with a single snail inside.

“My favorite main course,” Reichl wrote, “is the salmon with the falafel crust. Triangles of peeled tomato and cucumber decorate the plate, and the fillet is perched on a bed of hummus. A lemony coriander vinaigrette adds the perfect bit of punch; it is a wonderful dish. Many of the other fish are prepared with equal imagination. Halibut is paired with asparagus, and red snapper is surrounded by sesame-scented Asian vegetables. Grilled swordfish comes with sauteed broccoli rape, bacon and squares of polenta, a fishy riff on a B.L.T. Roasted cod is cooked with wilted spinach and tiny artichokes in a pungent caper butter.”

In an earlier incarnation, the place had been owned, as Cafe, by Picasso’s grandson, Richard Widmair-Picasso. Jeremy Marshall was the chef at Cafe and made the place a success. It became a glam hot spot for models and fashionistas.

But Marshall left Cafe and the food declined. After Cafe closed, he returned, along with his wife, who had been the sommelier at Windows on the World, and they opened Aquagrill, with the restaurant going on to achieve legendary status in culinary circles.

Aquagrill’s employees had been there for the full 24 years — or even longer, dating back to the Cafe days.

As one local told The Village Sun, “We saw boys who worked in the kitchen grow to be middle-aged men over the years, and wonder where they will go now.”

Meanwhile, across the street, The Soho Room bar/restaurant also has called it quits.

Workers were recently seen — and heard — throwing the place’s chairs and broken-up banquettes into a dumpster. The bar’s Web page features photos, of a cold mug of lager and a juicy burger, with the motto: “Best Taste — Great Price — We Love To See You Smile.”