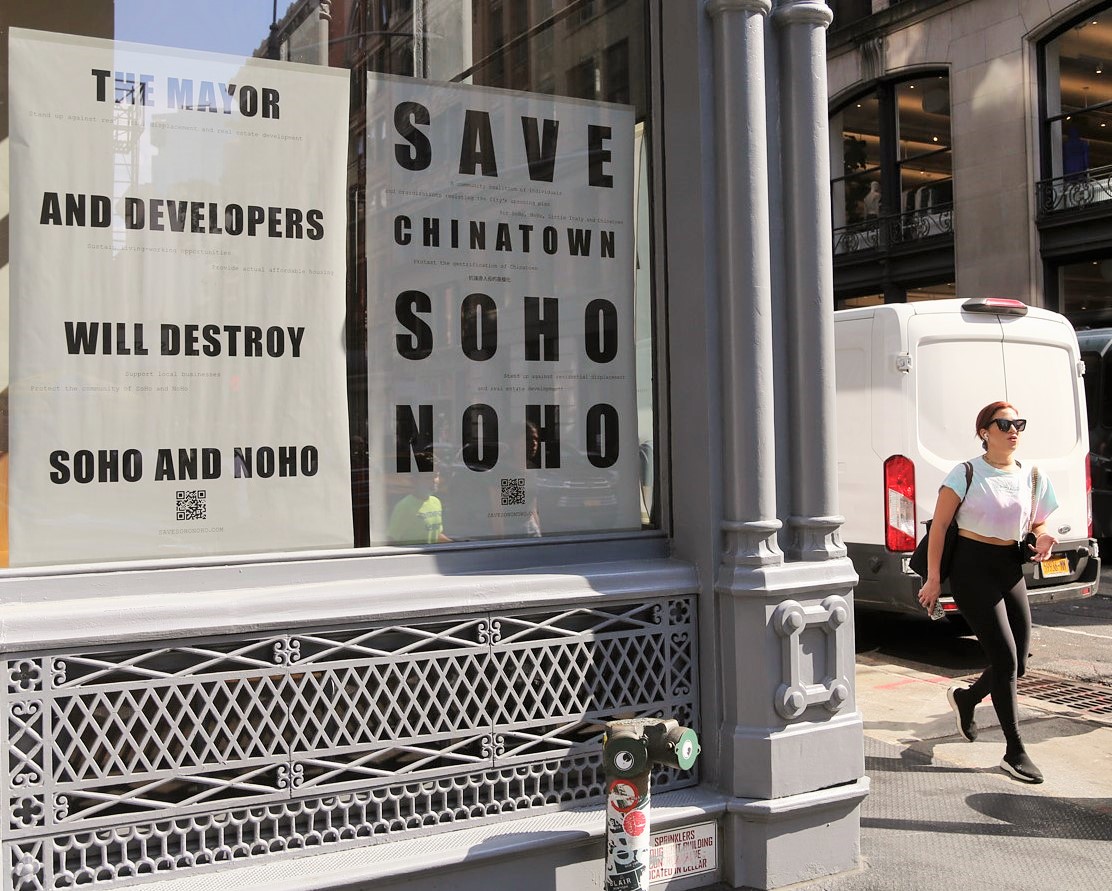 Signs against the Soho/Noho/Chinatown rezoning posted in a window at Spring and Mercer Streets. (Photo by © Jefferson Siegel)

Soho/Noho rezoning incentivizes demolition and displacement: And landlords know it

BY DASHIELL ALLEN | Housing activists and preservationists fear the Department of City Planning’s proposed Soho/Noho/Chinatown rezoning would make rent-regulated tenants vulnerable to one of the only loopholes not closed by recent sweeping tenant protections: demolition.

The Housing Stability and Tenant Protection Act of 2019 made it much harder for landlords to deregulate units. It repealed the “luxury decontrol” provision, under which apartments reaching a high-rent threshold could be decontrolled, and also the “vacancy bonus” that allowed owners to automatically raise rents on empty rent-regulated units by up to 20 percent. But activists say the law fails to protect tenants from eviction by demolition.

The Soho/Noho rezoning proposal would increase the floor area ratio (F.A.R.) — “the measurement of a building’s floor area in relation to the size of the lot/parcel that the building is located on” — throughout the rezoning area, incentivizing developers to build larger buildings than are currently permitted, thus giving them an incentive to demolish existing structures.

Berman believes that even a modest increase in the F.A.R. from 5 to 6 — as is proposed in Soho’s landmarked “historic core ”— would provide an incentive for demolition and thus deregulation of currently rent-controlled or rent-stabilized buildings.

“That creates the tremendous financial incentive to get rid of those rent-regulated tenants and units, so that you can demolish the building,” in order to build a significantly more profitable market-rate development with little to no affordable housing, he added.

Historic buildings would be vulnerable

Currently, most if not all buildings with rent-regulated units within the Soho/Noho rezoning area are built at or above the maximum F.A.R. bulk under the current zoning, so Berman says there’s very little incentive to demolish them to build something new at the same height. However, all that would change if the residential and commercial F.A.R. densities were increased.

In a statement to The Village Sun, the Department of City Planning said that “historic district protections cover most buildings with rent-regulated units in Soho/Noho, adding another layer on top of the State’s updated protections from 2019,” adding that, “the city is safeguarding income-restricted units while also bringing permanently affordable housing to these neighborhoods.”

However, Michael McKee, a longtime housing activist with Tenants PAC, countered that even historic districts — whose buildings are landmarked — would not be safe.

“Do not fall for the argument that because most of these buildings are in the historic district, there is no danger,” McKee said in written testimony submitted at Manhattan Borough President Gale Brewer’s recent hearing on the rezoning.

“All too often the Landmarks Preservation Commission routinely allows demolition of all but the facades of buildings, which is sufficient under rent-control and rent-stabilization rules to qualify as ‘demolition’ and to permanently remove apartments from the rent-regulation system,” McKee said. “In one of the hottest real estate markets in the five boroughs, where new condos sell for an average of $6.5 million and market rents for new construction approach $17,000 per month, developers will be licking their lips.”

Village Preservation has documented the demolitions of all but the facade of landmarked buildings on multiple occasions — such as at 827-831 Broadway, the former Union Square studio of painter Willem de Kooning.

On Tues., Sept. 14, the Landmarks Preservation Commission denied Brooklyn residents’ pleas to preserve the facade of the Grand Prospect Hall, which similarly had its interiors demolished, stating, “Because of alterations to the exterior and interior of the building, it does not have sufficient historic integrity for consideration as a landmark.”

A how-to guide for landlords

On Mon., Sept. 13, the Web site New York Apartment Law Insider published an article titled, “Demolition: One of the Last Ways to Deregulate a Building,” which names “demolition” as the only “exit strategy” for deregulating “rent-stabilized buildings regardless of their condition.” The article, written by real estate lawyer Adam Leitman Bailey — who, ironically, formerly represented East Village squatters — reads practically like a how-to guide for greedy landlords.

The article acknowledges that “there is no requirement that the building be in deteriorated condition in order to qualify for a demolition application.”

Bailey’s piece confirms — as McKee and Berman warned — that “an intent to gut the interior of the building, while leaving the walls intact, has been held as sufficient” to qualify as demolition.

“The article basically said in black and white everything that we knew was true, and that the city has tried to deny, but is so clearly true,” Berman said. “Finding this thing from landlords really just proved our case.

“Expect these [demolition] applications to take years and be battled in the courts,” the article says. “However, they are also one of very few options rent-regulated landlords have to restore profitability […] in the aftermath of the new draconian [2019] laws.”

The community’s plan to de-incentivize demolition

Joe Marvilli, a City Planning spokesperson, told The Village Sun in a statement that the rezoning will update “50-year-old zoning that prohibits new housing, including affordable housing,” because Soho and Noho “desperately need modern zoning to level the playing field and create opportunities for lower-income families.”

But Village Preservation thinks the rezoning would result in little to no new affordable rental housing. In fact, according to the organization’s research (See Page 11), close to 75 percent of residents of new developments would be homeowners, with a median apartment price of $1.539 million.

And, according to opponents like Village Preservation and McKee, the increased F.A.R. would instead incentivize landlords and developers to displace current low-income and rent-regulated tenants. Currently, according to City Planning’s own data, which excludes significant portions of the district — including part of the majority-Asian so-called “Southeast Housing Opportunity Zone” — 17 percent of households in the rezoning area make less than $50,000 annually while 35 percent make under $100,000.

Currently, due to the area’s mostly manufacturing zoning, as-of-right residential construction is not allowed, requiring developers to go through a cumbersome process of obtaining special permits.

“The current rules are not perfect,” Berman said. “And that’s the one thing that we agree with them about. But the new rules would make the situation much, much worse, not better.”

Back in December a coalition of 14 organizations including Village Preservation, the Soho Alliance and the Chinatown Working Group, released a Community Alternative Zoning Plan that would protect the at least 635 identified rent-regulated units in 105 buildings.

The community alternative proposal would keep the F.A.R. at 5 — its current level — while allowing for “new as-of-right residential development, only with mandatory inclusion of affordable housing.”

“So that removes the incentive for demolishing the four-, five-, six-, seven-story buildings,” Berman said, “which are the ones that contain all of the rent-regulated units.”