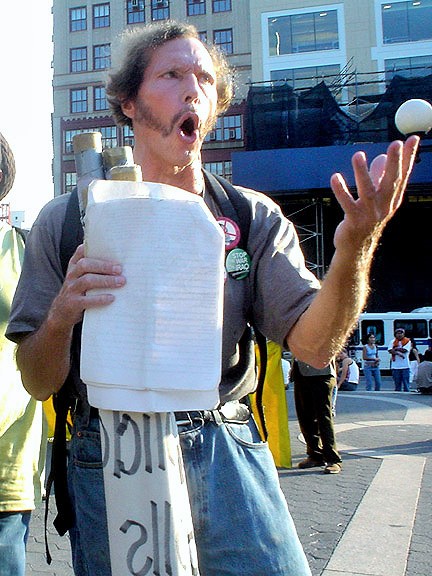 BY PAUL DeRIENZO | William H. Depperman, dubbed the “master graffiti writer” by The New York Times in 1986 and whose relentless postering campaign in the early 1980s screaming that “AIDS is GERM WARFARE by the U.S. government” and in support of other radical causes, has died at 80.

The huge white posters with small black print that covered hundreds of locations, along with graffiti-decorated subway cars, became synonymous with a city fallen on hard times.

One day in the summer of 1986 Ed Koch saw the posters from his car. The mayor’s complaint sent the New York Police Department’s Major Case Squad after Depperman in a caper that had infiltrators approach him at his 10 E. 16th St. apartment looking to help put up his posters. The cops then ensnared the self-proclaimed “revolutionary communist” in a paste-and-bust operation, catching him spamming posters on a building at Sixth Ave. and 27th Street.

Captain Michael Julian, then an N.Y.P.D. spokesperson who would go on to command the Ninth Precinct after the Tompkins Square Park police riot, said they wanted to “catch him in the ac,” of pasting the unwelcome broadsides.

Aron Kay, the Yippie “Pie Man,” who notably tossed pies in the face of the anti-gay conservative Phyllis Schlafly in the ’70s as well as Studio 54 mogul Steve Rubell, among other notables, was involved in a case against Depperman.

According to Kay, the conflict began in 1970 with Depperman allegedly defacing the Elgin (now Joyce) Theater in Chelsea, where an event was held plugging “Coup D’Etat in America,” a book claiming the U.S. government was seized in a coup on the day of the J.F.K. assassination. The book was penned by Weberman and Mike Canfield.

Apparently, Depperman took issue with some of the book’s findings that included allegations J.F.K. was actually shot by tramps who resembled several known C.I.A. agents, including Watergate burglar E. Howard Hunt. According to Kay, the vitriol came to a head when Depperman “recruited teens” in Washington Square Park to harass the Yippies. In the ensuing melee, Depperman allegedly pulled a knife on Kay and Weberman, leading them to press a charge of menacing against him.

Depperman defended himself at the trial, calling Kay to the stand and accusing him of being a C.I.A. agent, to laughter from the jury, which ultimately handed in a conviction.

A leaflet distributed after the trial defending Depperman was authored by longtime Lower East Side activist Joel Meyers, who claimed “fake anarchist” Yippies were slandering Depperman to “generate an atmosphere in which murder or attempted murder of Depperman is supposed to be acceptable.” The leaflet added that the Yippies were “proto-fascist” for handing out free pot at their smoke-ins.

Depperman spent the ’90s and early 2000s as a fixture in Union Square Park, where he ranted about the “fake left” and harassed other political groups, including the No Police State Coalition, who were using the park to promote anti-racism.

A photographer published numerous photos of Depperman, with scraggly mutton-chop sideburns and neck veins popping, screaming at activists who covered him in spray-can Silly String. The photog, Normal Bob, calls Depperman “an atheist with a lisp.” But ultimately Bob says Depperman was a one-man show who “couldn’t find someone else” to hold up the other end of a banner. But he adds he’ll miss him as the “lone voice” of a Russian communist sympathizer, calling him “wonderful, beautiful, peculiar.”

William H. Depperman suffered a stroke in July and was admitted to a hospital, where he died four days later on Aug. 1. His remains are at the morgue of the city’s Office of Chief Medical Examiner, where the body is yet to be claimed.

The morgue staff says they called a Steve Depperman they think is a relation, but the call wasn’t returned. The Village Sun called, as well, but our message hasn’t been returned either. The M.E. has requested that William Depperman be buried on Hart Island, the city’s potter’s field.