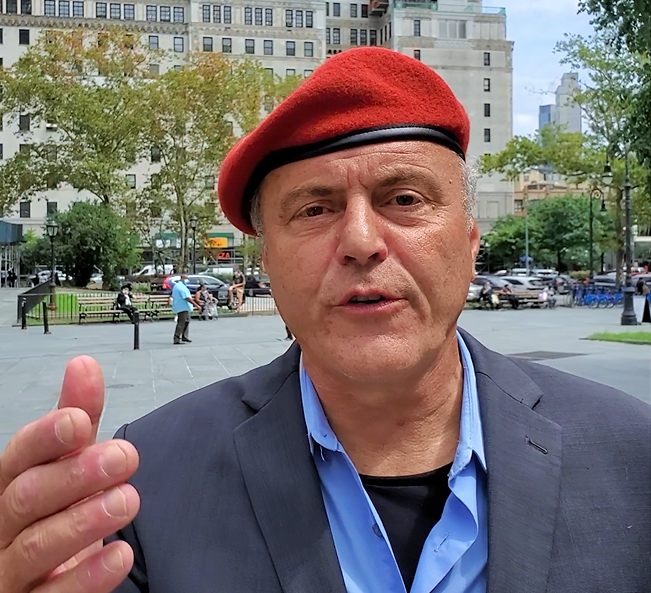 Curtis Sliwa shared his thoughts on Washington Square Park and the scourge of dangerous and deadly street drugs. (Photo by The Village Sun)

BY LINCOLN ANDERSON | Curtis Sliwa boasts that he’s the candidate for mayor with true “street cred,” not Eric Adams.

To that end, he shared some of his on-the-ground insights about Washington Square Park, dangerous street drugs and homelessness with the The Village Sun.

Before launching into a press conference Tuesday attacking his mayoral election rival Adams, Sliwa spoke with the newspaper about Washington Square Park today, Washington Square and Tompkins Square parks in the 1980s and the troubling boom of heroin, fentanyl and — the worst drug, in his view — K2.

The video of the interview runs seven-and-a-half minutes.

The Republican candidate, who is also running on the Independent ballot line, bashed Mayor de Blasio for inconsistency and lack of clarity on the policing of Washington Square Park. He said former Mayor David Dinkins had been consistent when he closed Tompkins Square Park in 1992 and ringed it with a 20-foot-high fence for a renovation after a homeless tent city had filled the park.

He said he remembers the fence well because when three men attacked him on the street with bats in 1992 he clambered over it to escape.

“And the police are always being pulled like a yo-yo,” he added. “One minute they have ’em coming in with body armor, batons — you know, we call ’em, ‘bats and hats’ — ready for riot. You say, ‘Really?’ And then, the next minute, they’re out of sight, out of mind. So people don’t know what to take from that.”

The founder of the Guardian Angels anti-crime group noted that in the 1980s the Angels were invited by Howard Moody, then the pastor of Judson Memorial Church, to have a headquarters in the basement of the famed Washington Square South church so that they could patrol in the park and the neighborhood.

“We patrolled that whole area for a long time to help keep it quiet because it was getting very raucous — nowhere what we’re seeing now,” Sliwa said.

He noted that he and his second wife, Lisa Evers, now a Fox 5 News reporter, got married at Judson back then.

The candidate said he is very concerned about drug use in the landmark Greenwich Village park and on the city’s streets, in general. The New York Post recently reported that there has been “a rising body count of suspected drug overdose deaths” in and around the park, with a total of five since May 31, including three in the first week of August alone.

The Village Sun first reported about a man found dead on a bench on W. Third St. near the park on July 15 who had likely OD’d, according to police.

Members of the Facebook group East Village Neighbors also recently had a discussion about seeing a marked increase in the use of injection drugs and hard drugs on the streets.

“My concern is people who are injecting and dying in the park,” Sliwa said of Washington Square Park. “You would think there would be immediate intervention of drug intervention specialists — it doesn’t require cops. But I don’t see that happening, and I’m in that park often.”

He said that the answer is either “zero tolerance” or creating safe injection centers — with free drugs provided to the users. If the drugs are not given gratis, he warned, then street drug dealers will prey on the addicts, who will, in turn, have to shoplift from local stores to “feed the beast” of their addiction.

Since Gay Pride weekend at the end of June, police have regularly been closing Washington Square Park around midnight, its traditional closing time. They have been using so-called “soft policing” techniques, like politely letting people know, a half hour before midnight, that the park will be closing soon and bathing the fountain plaza in bright floodlights, plus posting a surveillance camera tower by the arch.

In the months before then, though, neighbors complained that the park was the scene of frequent rowdy late-night rave parties going on into the early-morning hours, with amplified music, fireworks, drinking, motorcycles and litter. Neighbors also complained about ongoing drug use in the park’s northwest corner.

In late May the Parks Department closed off the park’s northwest corner and announced that the park would have an earlier closing time of 10 p.m., at least temporarily. That led to a clash on June 5 between police and young parkgoers, including a group of anti-police activists, leading to 23 arrests. Cops then backed off from closing the park at night for a while, waiting until after Gay Pride to begin enforcement of the traditional midnight closing time.

In addition, according to Borough President Gale Brewer, social-service outreach groups are now working in the park seven days a week to try to assist homeless people and substance abusers who are open to receiving help.