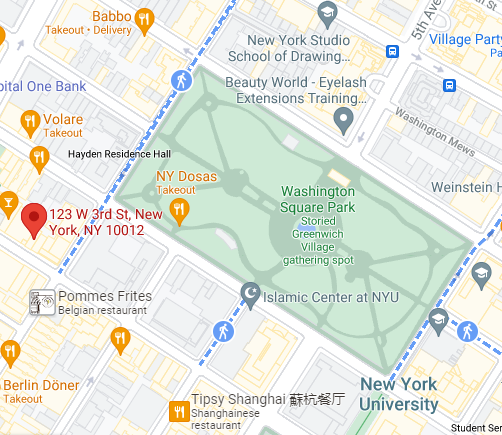 The man was seated on a bench, lifeless, on W. Third St., where the red "pin" is on the map, a little more than a block from the park. (Google Maps)

A man was found dead, possibly of a drug OD, about a block away from Washington Square Park early Thursday morning, police said.

Cops said that around 7:15 a.m. officers responded to a 911 call of an unconscious man in front of 123 W. Third St., just west of the Groove music club at the corner of MacDougal St. They found the victim seated on a sidewalk bench, unconscious, with no obvious signs of trauma.

E.M.S. responded and pronounced the man dead at the scene.

“Appears to be a possible drug overdose,” a police spokesperson told The Village Sun.

The medical examiner will determine the cause of death and the investigation is ongoing.

Police are working to identify the man and are withholding release of his name pending notification of his family first.