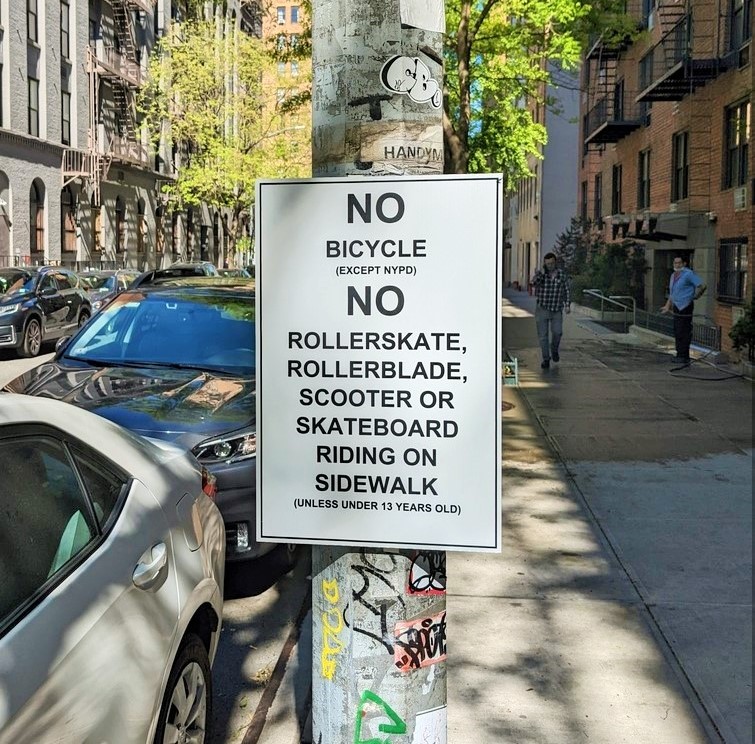 One of the new signs on W. 16th Street between Sixth and Seventh Avenues. (Photo by Paul Groncki)

Signs of a backlash against ‘bikes gone wild’ on sidewalks

BY THE VILLAGE SUN | Whose sidewalks? Our sidewalks!

In pedestrians’ ongoing fight for safe pavement, a Chelsea resident recently took matters into his own hands, installing signs along W. 16th Street between Sixth and Seventh Avenues reminding people that it’s illegal to ride bikes on the sidewalk — unless the rider is a young child.

The placards are in line with the city’s rules of the road (and sidewalk), per the Adminstrative Code, according to the Department of Transportation — at least in terms of bikes, e-bikes, e-scooters and gas-powered mopeds.

“Ride in the street, not on the sidewalks (unless rider is age 12 or younger and the bicycle’s wheels are less than 26 inches in diameter),” the D.O.T. Web site stresses with bold type.

However, rollerskating and skateboarding on the sidewalk, while potentially dangerous — and frequently annoying — to pedestrians, is apparently not illegal, according to D.O.T. Nevertheless, the 16th Street signs include them on their list of no-nos. Certainly, hoverboards and monowheels are not welcome either.

Paul Groncki, president of the 100 W. 16th Street Block Association, sent the newspaper a photo of one of the signs, but it’s not clear who put them up along the block.

“I think it has gotten very dangerous out there,” Groncki told The Village Sun. “No one obeys the rules…not the motor vehicle drivers, nor the cyclists (motorized or not), nor the skateboarders nor the scooter riders, nor the pedestrians. They need to be reminded that the rules are there to make it safer for everyone. No one is doing this. We have been abandoned by Transportation Alternatives, with their sole focus on more access for two-wheeled vehicles of all sorts.

“There is no police enforcement to speak of,” he lamented. “Rules about vehicle registration have been abandoned and no one even knows which two-wheeled motorized vehicles are supposed to be registered. Wheeled riders ignore the bike lanes many of us fought for. Motorized two-wheeled vehicles go the wrong way, ride on sidewalks, ignore traffic lights, use the bike lanes indiscriminately, scare pedestrians, etc.”

The activist explained that these kind of resident-driven street signs do several things.

“They educate and remind vehicle users of the rules — not ‘scaring’ them with the prospect of enforcement fines that will never happen,” he said. “They let pedestrians know that someone is at least trying to address the problem. They shame public officials into doing something — maybe even officially recognizing the need for signs.”

As reported by The Village Sun, in related news, Clayton Patterson, the well-known Lower East Side documentarian, also recently took matters into his own hands to protect himself from e-bike deliverypersons whizzing by on his sidewalk. He installed a barrier extending 4 1/2 feet off the front of his Essex Street building, forcing the e-bikes to veer away from his front door, so that he can set foot outside without fear of getting hit.