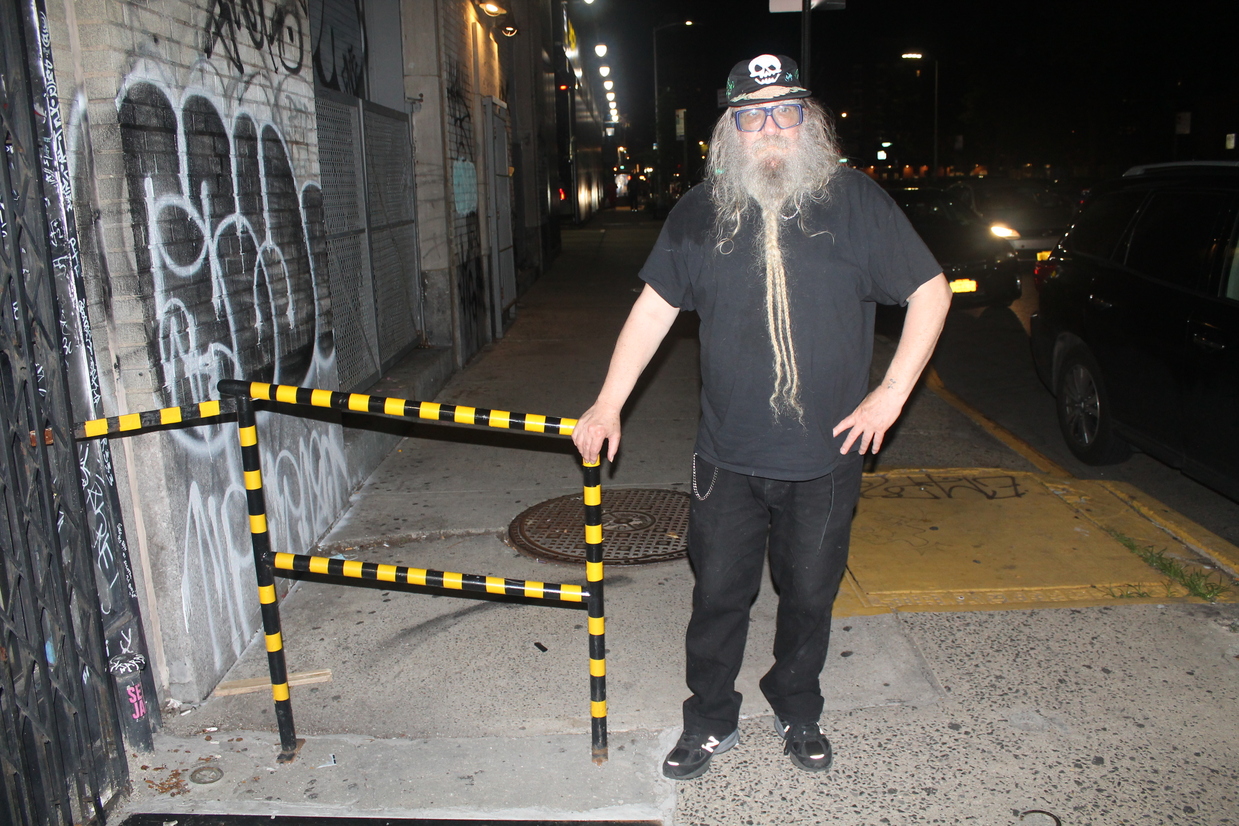 Delivery detour: Clayton Patterson has installed a barrier outside his Essex Street home so that he can safely step out onto the sidewalk without being struck by e-bike deliverypersons. (Photo by The Village Sun)

BY LINCOLN ANDERSON | They say necessity is the mother of invention… .

Clayton Patterson isn’t fazed by much. In 1988, with a then-novel handheld video camera — long before today’s era of ubiquitous cell-phone cameras — he covered the hours-long Tompkins Square Park riot. He was later arrested by police more than once, had teeth knocked out scuffling with them. He claims the arrests were retaliation for exposing cops’ violence during the riot.

Turned off by the elitism of the art scene in Soho, where the Canadian immigrant had first landed, he moved instead to the hardscrabble Lower East Side in the 1980s amid burned-out buildings and open-air drug dens. In the midst of all the mayhem, he felt at home.

A survivor, Patterson, 73, has stuck it out in the ’hood — though the ’hood has since morphed around him into a Vegas-style nightlife hotspot.

“These people are just drinking and smoking weed,” he said of the area’s nightlife scene. “Everyone’s imported. It’s not like they’re coming down here to read poetry like in the ’60s. The only culture is drinking.”

At any rate, still sporting his signature baseball cap with an embroidered skull on it, he remains industrious as always, working on art projects, editing anthologies and more. When he leaves his building, he’s immediately greeted by people he knows. He’s totally at home in his world.

But there’s one thing today that does make him worried, something that he also experiences when he steps out onto the sidewalk — deliverypersons speeding along the pavement on e-bikes racing to drop off their next orders.

Patterson lives on Essex Street, between Stanton and Houston Streets, in a two-story building that once housed a dress shop on its ground floor. While the street was actually often quiet back in the ’80s, since the drug dealers didn’t want to attract attention — “It was like a dirt road,” Patterson said, “You could sleep in the street” — now on weekend nights there is a constant parade of young revelers strolling past his storefront window on their way to the latest bars and lounges.

Patterson isn’t concerned about the foot traffic but is concerned about traffic of another kind, the e-bike and motorcycle deliverypersons — who are supposed to use the street not the sidewalk. With the advent of apps like Grubhub, Uber Eats, DoorDash and Caviar, to name just a few, the delivery riders’ numbers have exploded. Meanwhile, though, there seems to be little to any enforcement against the streaking scofflaws.

“They don’t make any noise,” Patterson said of the heavy, fast-moving bikes. “I could step out of my door and ‘boom!’ They go 20 miles per hour or more, they weigh 80 pounds, and when you walk out of your building you are not expecting to be hit by a bicycle.”

As a result, two months ago, Patterson installed a solid, welded-steel barrier in front of his building. He contracted a local, Domincan-owned company to build it. Painted like a bumblebee in black and yellow bands, it extends about 4 1/2 feet out onto the sidewalk. As a result, e-bike and moped deliverpersons can no longer blithely zip right by his front door but must swerve away from his building to avoid crashing into the barrier. So far, no one has slammed into the clearly marked structure.

“C’mon,” Patterson scoffed, “you’d have to be an idiot not to see it.”

He positioned the fence right in front of the sidewalk gate to his basement since the bikes zooming over the metal door had also been creating a constant racket, like cars driving over steel plates on the street.

Patterson’s stretch of Essex Street admittedly does not have many residential buildings, which might partly explain why the e-deliverpersons ride on the sidewalk there so overtly. Next to him is an M.T.A. substation, followed by an open-air parking lot, a restaurant and then an old savings bank on the corner that has been variously used as a dance club and strip club. To the south of him are a beauty salon and a corner deli, the latter which is a takeoff spot for e-delivery bikers.

“Would I want a car driving down the f—in’ sidewalk?” he said, indignantly, his voice rising. “There’s people here coming out of the beauty salon who are sometimes older women, sometimes with little kids. It’s f—in’ stupid and it’s dangerous.

“They don’t have insurance,” he said of the delivery bikers. “There’s no responsibility anywhere — you’re just injured.”

Luckily, he hasn’t been hit, though the new barrier now makes that happening less likely.

Eight years ago, Patterson had been thinking of relocating to Austria, where he participates in the annual WildStyle tattoo and freak show. He had even announced it, as reported in The New York Times. This past Saturday evening, he had just recently returned from WildStyle, noting he was still feeling some jet lag.

But he ultimately decided against pulling up stakes after his wife, Elsa Rensaa, started experiencing health problems. And he also realized how difficult it would be to move all his belongings, including his voluminous photo and documentary archives.

Meanwhile, critics say the city’s streets and sidewalks have turned into a “Wild West” of lawless e-bikes, mopeds and motorcycles — that there is no enforcement.

“What can you do about it?” Patterson said, fatalistically. “Nothing.”

As he spoke, he stroked and braided his long gray beard, starting weaving it together from the top in three strands.

“The only way something will happen is when someone important gets hurt,” he offered.

Indeed, Mayor Eric Adams seems more concerned about random youths popping wheelies on ATVs on the street than doing anything about the army of e-bikes and mopeds riding the wrong way and on sidewalks, putting pedestrians, especially older ones, at risk.

So Patterson has taken matters into his own hands.