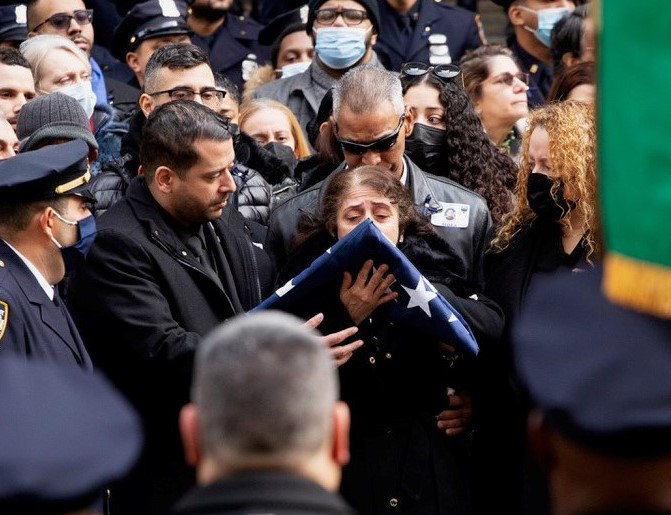 Slain Police Officer Wilbert Mora's mother tearfully held an American flag that was given to her at her son's wake. (Photo by Q. Sakamaki)

BY THE VILLAGE SUN | Thousands of “members of the force” lined Fifth Avenue outside St. Patrick’s Cathedral on Tuesday at the wake of Police Officer Wilbert Mora.

Mora, 27, and his partner, Jason Rivera, 22, died after being ambushed by a heavily armed gunman as the officers, who were both Latino, reponded to a domestic incident in the Bronx.

Among the officials, present and past, at the wake was former Mayor Rudy Giuliani. The Trump lawyer and infamous 2020 election-results denier was accompanied by his son, Andrew Giuliani, 35. The younger Giuliani plans to run for New York governor in the Republican primary election in June.

A week before Mora’s wake at St. Patrick’s, one was held there for Rivera. Anti-police activists have criticized the large gatherings of officers at the two events. The New York Post reported that Academy Award-winning actress Susan Sarandon tweeted it shows that so many cops aren’t really needed around the city to keep it safe, while another actress complained on TikTok that the horde of cops was blocking traffic.

For their part, police and their supporters say they’re showing solidarity amid a wave of gun violence and cop shootings that is gripping the city.

President Biden will visit New York City on Thursday to talk with Mayor Adams about combating crime and gun violence.