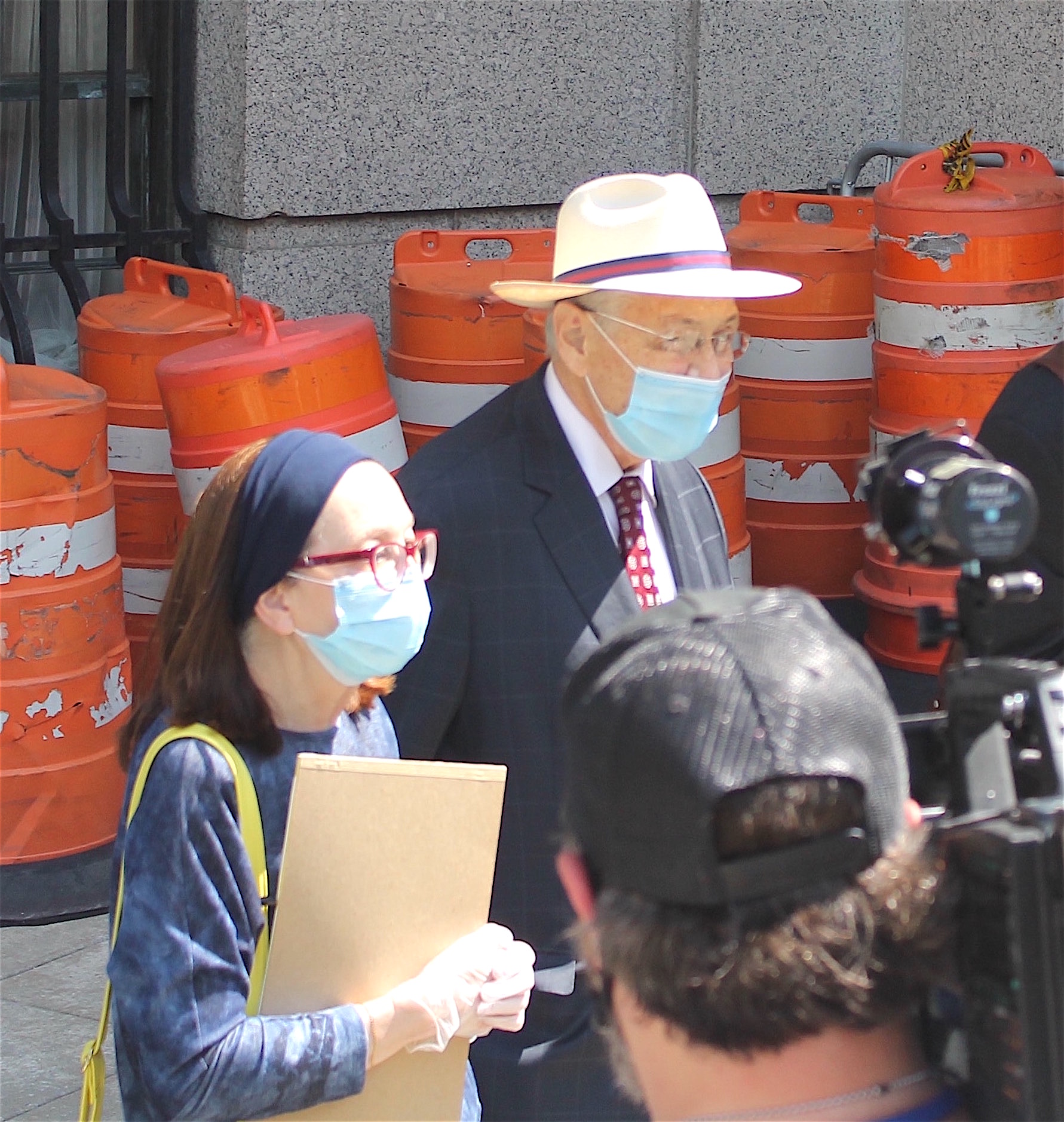 Former Assembly Speaker Sheldon Silver and his wife, Rosa, leaving federal court on Centre St. on July 20 after Silver's sentencing to more than six years in prison. (Photo by The Village Sun)

BY MARY REINHOLZ | Former New York State Assembly Speaker Sheldon Silver, the once-powerful Lower East Side pol convicted twice for corruption and sentenced three times by the same federal judge, isn’t going to prison next month without another appeal to remain a free man out on bond.

According to a Department of Justice official, Silver, a 76-year-old Democrat, filed a notice for a writ of certiorari to the U.S. Supreme Court on July 23. Three days earlier, U.S. District judge Valerie E. Caproni had sentenced Silver to six-and-a-half years behind bars — just six months less than his second sentence of seven years that she handed down in January.

Caproni first sentenced Silver in 2016 to 12 years on charges of illegally pocketing nearly $4 million in referral fees from two Downtown law firms where he had served as a private counsel and took official action to benefit clients. He was also charged with extortion and money laundering.

Silver’s notice is a formal request that the SCOTUS judges review his case, which began five years ago. In 2017, the Second Circuit Court of Appeals threw out several of the charges, including one claiming Silver steered clients from a Columbia University cancer researcher to a law firm Silver represented in return for obtaining a $500,000 grant for the doctor from the New York State Department of Health.

Meir Feder and James P. Loonam, two of Silver’s lawyers, did not respond to a phone call and e-mail asking for additional information.

It’s unclear whether Silver’s appeal to SCOTUS could delay the start of his  sentence, scheduled to begin Aug. 26, or whether SCOTUS will even review his case.

Emily Goodman, a retired New York State justice, told The Village Sun she wasn’t sure that there are enough judges on the high court who would agree to take a look at Silver’s prosecution.

“The Supreme Court accepts very few cases,” she said in a statement. “The granting of certiorari is rare and requires, for example, a constitutional issue or contradictory positions taken by different circuits that only the Supreme Court can resolve. I doubt they would revisit the quid pro quo issue. Mr. Silver needs four justices to vote to hear his case and that will be very tough to get.”

In contrast, longtime Brooklyn Assemblymember Joseph Lentol, a former prosecutor serving his last term in the New York State Legislature after a defeat by a millennial challenger, made it plain he hopes Silver will get a SCOTUS review. He noted that the U.S. Supreme Court had heard the case of former Virginia Governor Bob McDonnell, and overturned his conviction in 2016 for using his public office to enrich himself personally.

“I don’t think [Silver] has any other place to go to get any kind of relief” from Caproni’s ruling except SCOTUS, he said.

Lentol believes that Silver didn’t think he was “committing a crime” when he accepted hefty fees for referring clients to two law firms and providing official benefits.

“I don’t think he tried to steal money he felt entitled to,” Lentol said in a telephone interview. “He may have been guilty of unjust enrichment, an ethical breach.”

The assemblymember noted that SCOTUS could decide to hear Silver’s case because it’s gone before an appellate court “and they may want a lower court to make another ruling on this kind of situation. Most of these cases have been very nebulous as to whether criminal behavior was involved,” he noted. “The Supreme Court has ruled in a couple of cases that they’d like a [higher] standard for cases brought for honest-services fraud. I don’t think [Silver] would have been convicted under bribery statutes.”

At Silver’s July 20 court sentencing, his lawyers asked Caproni to re-sentence him to home confinement, noting that his age and multiple health problems made him especially vulnerable to contracting the deadly coronavirus in prison. Silver himself had written the judge telling her he “didn’t want to die” in prison.

In response, radical left-wing lawyer Stanley Cohen, a former East Village resident, said Caproni’s “notion that people are just as vulnerable to COVID outside as inside [prison] is just f—ing crazy. It’s like saying the Earth is flat. It’s nonsense. When I was in a prison camp, you had fungus and disease and you wanted hand sanitizer so you could spray the urinal. You’d follow trails of blood to get to the bathroom,” added Cohen, who is now living in his house in the Catskills and practicing law again after serving less than a year in a prison camp for impeding the Internal Revenue Service.

“Nobody convicted of a nonviolent felony should be in prison” and at risk for COVID, he stated.

Cohen, who lived in a loft on Avenue D until 2015, recalled dealing with Silver over the years when Cohen was representing clients ranging from homeless people to squatters and accused drug dealers. He compared Silver to an old-fashioned “ward heeler, a phrase in Chicago about somebody who can take care of things.”

“I think Shelly is going to be O.K.,” Cohen said. “I have followed his case. We’ve been at odds periodically over the years. But when it came to mom-and-pop New Yorkers, whether it was squatters or homeless people, and you were hitting a brick wall, you could reach out to him. He was to some degree a mensch.”

As for SCOTUS looking at Silver’s case, should the justices do so, Cohen surmised they “couldn’t be too happy with a judge” who hears a case again and takes “six months off of a seven-year sentence. It smacks of vindictiveness.”