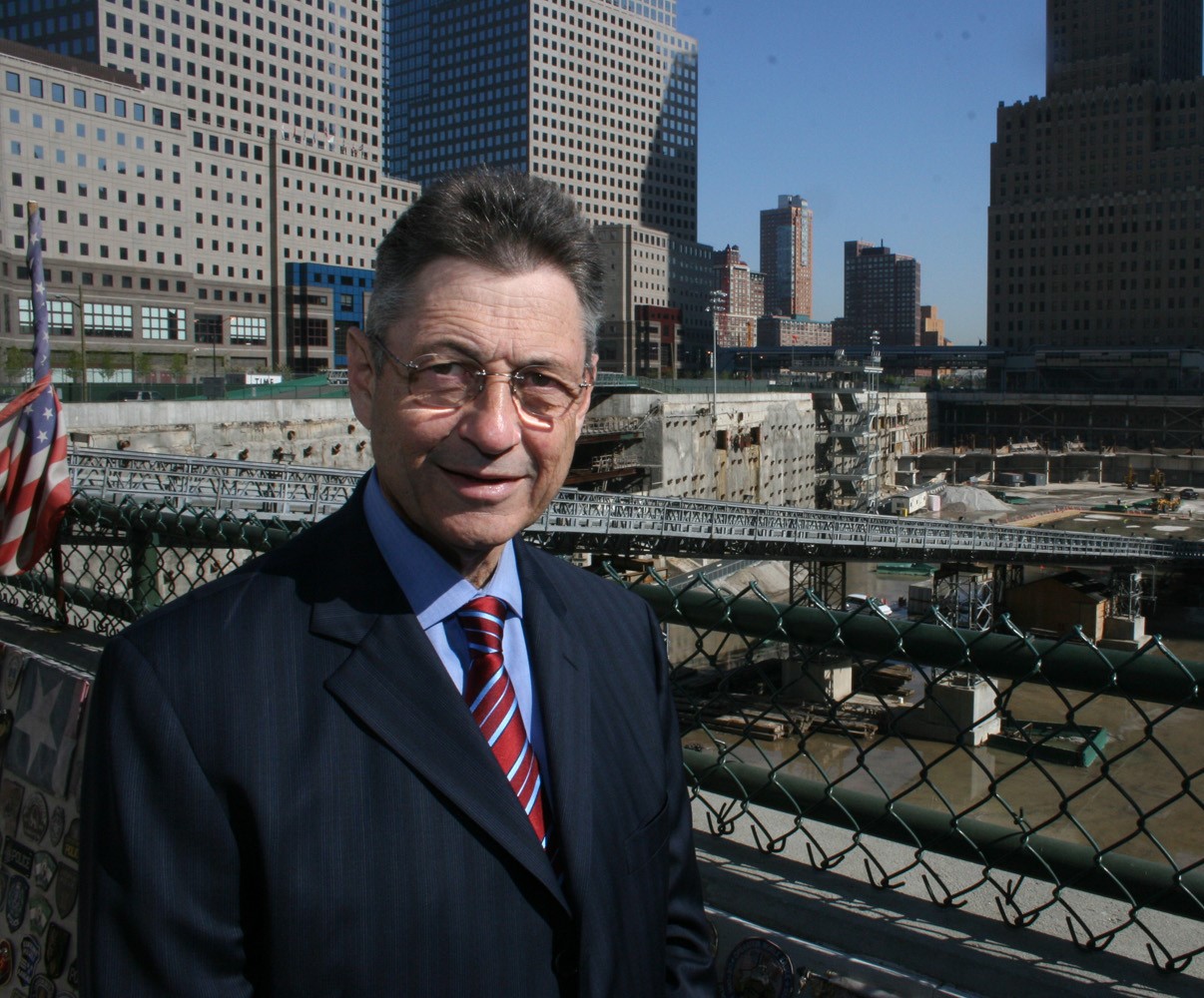 Sheldon Silver at the World Trade Center groundbreaking ceremony on April 27, 2006. The 9/11 terrorist attack struck in the heart of his Lower Manhattan district. (Photo by © Jefferson Siegel)

BY LINCOLN ANDERSON | Updated Jan. 25, 4:30 p.m.: Sheldon Silver, who was the longtime speaker of the New York State Assembly until an epic fall from power, has died at age 77.

According to the New York Post, Silver died in a federal prison in Middlesex, Massachusetts, where he was serving a six-and-a-half-year sentence after being convicted in 2018 of taking nearly $4 million in kickbacks. Judy Rapfogel, Silver’s former chief of staff, confirmed his passing.

An Orthodox Jew, Silver was a native Lower East Sider whose family owned a hardware store in the neighborhood.

Silver was elected to the Assembly in 1977. He was then elected the Assembly speaker in 1994. As such he became one of the so-called “three men in the room” deciding the fate of bills and funding for New York State. In fact, many said he was the state’s most powerful politician, particularly when there was a weak governor.

Silver held the Assembly’s top post until resigning shortly after being arrested on federal corruption charges in 2015.

He was convicted in two scams. In one, he funneled grants to a Columbia University doctor in return for him directing asbestos plaintiffs to Silver’s law firm. In the other, Silver received referal fees in return for steering developers with business before the state to a different Downtown law firm. In the power broker’s defense, some said that hard-charging U.S. Attorney Preet Bharara had “lowered the bar” for what constitutes this kind of political corruption, that it had formerly been a gray area — admittedly, one that some politicians exploited.

Suffering from poor health, including kidney problems, Silver was temporarily released from jail in May 2021 and allowed to return home during the COVID pandemic. But the reprieve was brief and he was soon put back behind bars.

He is survived by his wife, Rosa, a former schoolteacher, and four adult children.

In her comment on Silver, Assemblymember Deborah Glick, who has been in office for 30 years and knew him well as a friend and political ally, highlighted the many positive gains he presided over.

“Many important and groundbreaking legislative acts occurred during Shelly’s speakership,” Glick said. “Most people will not remember that passage of hate crimes legislation, civil rights for lesbians and gay men, marriage equality, protecting women’s health or the rebuilding of Lower Manhattan after 9/11 were accomplished during his tenure. Shelly was also passionate about education and focused on reducing overcrowding in schools.

“Shelly did most of this while negotiating with Governor Pataki and Senate Majority Leader Joe Bruno — both Republicans — and the New York City mayor, Rudy Giuliani,” she noted. “Those of us who knew him respected his intellect and negotiating skills. Sadly, part of the legacy is also the well-known failings.”

Assemblymember Richard Gottfried, another veteran Manhattan delegation member and Silver ally, said, “Sheldon Silver championed so many progressive issues, in legislation and in budgets, over his many years of service. My thoughts are with his family and friends in this difficult time.”

Former Councilmember Kathryn Freed, who also represented Lower Manhattan, recalled that she and Silver were not always on the same side of the issues.

“I worked with him and I worked against him,” she said. “I think Shelly was a mixed bag. There are a lot of people who think he was great and did a lot of good things for the neighborhood. There were a lot of people down here who didn’t feel the things he did benefited them. There was the urban-renewal project that for 25 years never got built; I was pushing to get something in there when I was in the Council.”

Freed was referring to the open-air parking lots that long sat where Essex Crossing, a major mixed-income development with commercial uses, rises today just south of the Williamsburg Bridge. In blocking the site’s development, Silver was representing the feelings of Grand Street residents who opposed low-income housing being built there. Some said he was also protecting his hold on his own Assembly seat since, if the Seward Park Urban Renewal Area a.k.a. SPURA was developed with 100-percent affordable housing, it would change the district’s demographics.

On the other hand, Freed said, “I think if Shelly was still our assemblymember and still speaker, we’d still have East River Park and we’d have resiliency. He knew the park was an asset for the community.” The park’s southern half has already been clear-cut and destroyed for the two-phase East Side Coastal Resiliency project.

Freed said Silver learned to move beyond his tight-knit Grand Street base.

“He was very conservative at first but evolved,” she said. “But he kind of had to — it’s Manhattan. … You learn to represent people.”

She said one of his biggest failings, though, was the repeal of the commuter tax, which Silver did to help some suburban Democrats facing tough elections.

“He never should have repealed the commuter tax,” she stressed. “That costs us billions of dollars each year. Imagine if we had all that money for the M.T.A. We’re the only city in the world, certainly in the country, that has a subway that doesn’t have a commuter tax.”

(In fact, at the time of its repeal in 1999, the commuter tax was bringing New York City $360 million a year. That figure naturally would be higher today if the tax were still in effect.)

That Silver died in jail is very sad, Freed added.

“What the hell?” she said. “When he got out and they put him back in, people felt he was using his influence [to get out of prison]. I mean, let him die at home with his family. It’s terrible for the family. I feel horrible for them. And it’s inhumane.

“It’s sad that all the good he did do will be overshadowed by the conviction,” she said.

However, Arthur Schwartz, a Greenwich Village Democratic district leader and progressive activist, wasn’t about to cut Silver any slack.

“I don’t like speaking badly of someone who just died,” Schwartz said. “But here, if the comments are all about the ‘good’ things he did, it would be wrong. In the end, we found out about how, in two specific instances, Sheldon Silver enriched himself using his position. But for years he was perhaps the most important political figure in the state. Nothing happened legislatively — most importantly in the budget — without Silver’s say-so, and no one crossed him and his enforcers.

“Who knows in what other ways Silver enriched himself while doing ‘good.’ Even in the end, he used his millions of dollars in corporate campaign contributions to pay for his lawyers, and to pay his fines. Interesting that religious Jews don’t believe in hell.”

Sean Sweeney, a longtime leader in the Downtown Independent Democrats political club and currently its vice president, hailed Silver as a “progressive champion.”

“Like the rest of us, Shelly Silver had his flaws but he did well for his constituents,” Sweeney said. “For someone who kept a kosher kitchen, he certainly brought home the bacon.

“He was a progressive champion who delivered for his constituents. He brought us new schools and the Bowery Chinatown Y, pushed for marriage equality and women’s rights, and other services too numerous to mention.

“He did his crimes and he served his time,” Sweeney said. “But it is unconscionable for the federal government to let this sick old man die alone in jail. Scotland released the Lockerbie bomber on compassionate grounds when he claimed he had terminal cancer — and that guy killed 270 people. So this government couldn’t release Shelly a few weeks before his death to let him die beside his family and not alone in prison? Shame on the Bureau of Prisons.”

Along with Silver’s fall from power, his political club that had long dominated Grand Street, the Truman Democratic Club, also was deposed. It was replaced by the new, progressive Grand Street Democrats, whose candidates for district leader defeated those of the Truman club. District Leader Caroline Laskow said neither she nor the Grand Street Dems would be commenting on Silver’s passing.