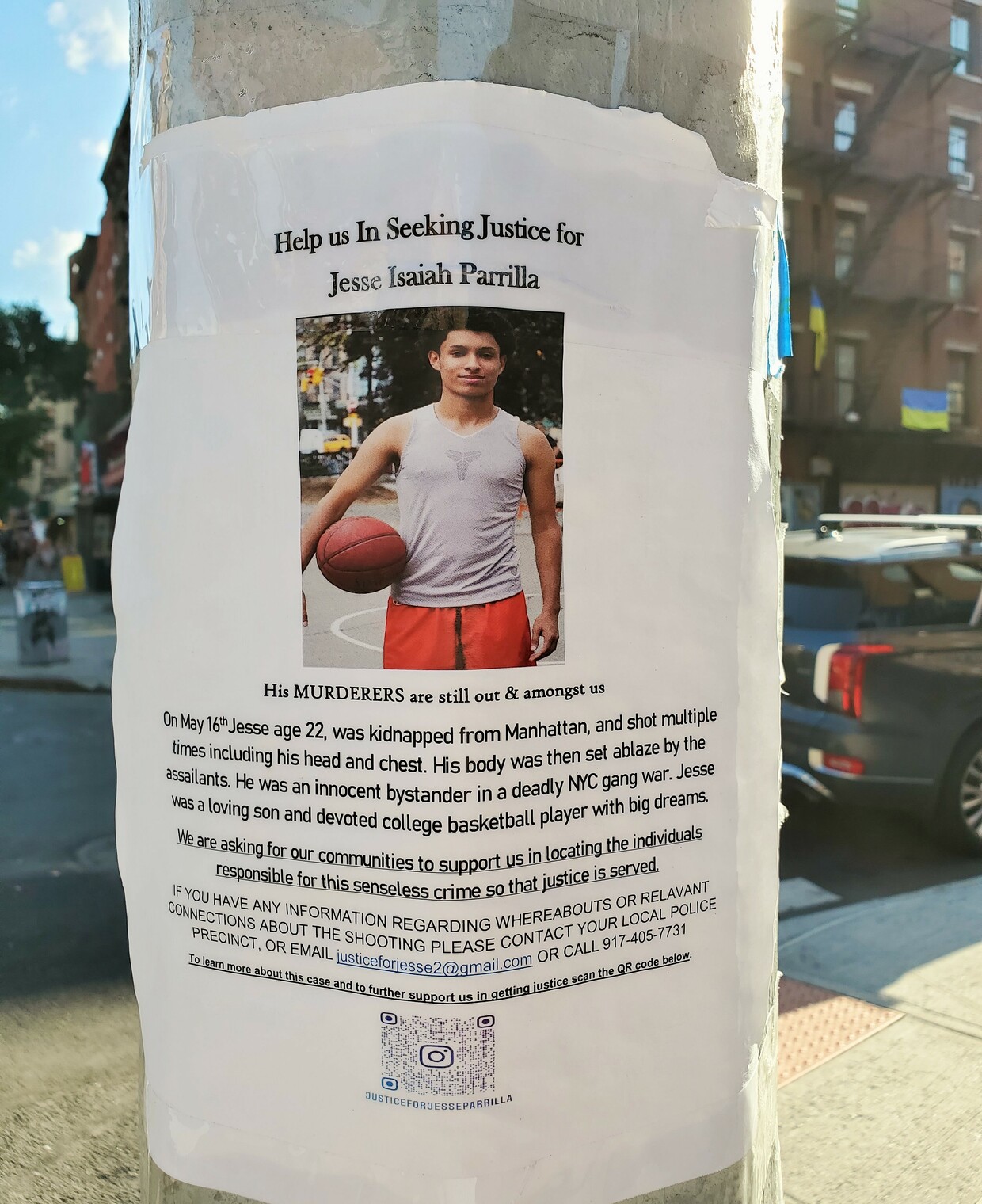 A poster on First Avenue in the East Village seeking tips about Jesse Parrilla's murder. (Photo by The Village Sun)

Seeking justice for Jesse and Nikki after tragic double homicide

BY THE VILLAGE SUN | It was nearly three months ago that young East Side friends Jesse Parrilla and Nikki Huang, both 22, were brutally murdered by gang members in a horiffic crime that shocked the city.

Police have not made any arrests in the case yet.

Meanwhile, posters by a group seeking “Justice for Jesse” can be found on lightposts around the East Village. The group is asking community members who may have any information about the killers’ whereabouts or “relevant connections about the shooting” to contact police or to contact them at justiceforjesse2@gmail.com.

Parrilla, who lived in the East Village, played one year of basketball at Genesee Community College.

“He was an innocent victim in a deadly NYC gang war,” the posters say. “We are asking for our communities to support us in locating the individuals responsible for this senseless crime so that justice is served.”

Huang’s family owns Wa Lung Kitchen, at 553 Grand St., by the Grand Street co-ops and live in the neighborhood.

Her friends have regularly been leaving freshly lit candles in her memory in front of the Chinese restaurant.

According to reports, the two young friends were victims of ongoing bad blood between the Down the Hill Gang, which operates in the East Village, and the Up the Hill Gang, whose turf is the Lower East Side — a rivalry that was apparently inflamed after an incident involving Huang.

On May 15, Huang reportedly was robbed of her handbag, containing cash and credit cards, by a Down the Hill Gang member outside a Lower East Side housing complex. Instead of alerting police, though, the story is that Huang told friends of hers in the other gang about it.

That was quickly followed by an escalating series of retaliatory shootings. Later that same day, around 11 p.m., Brandon Atkinson, 39, was fatally shot in the head in the East Village at the corner of E. Third Street and Avenue D. The New York Post described the victim as “a reputed member of the Down the Hill gang,” though added it wasn’t clear if he was the purse thief.

Just a couple of hours after the Avenue D murder, two Up the Hill Gang members were shot and wounded on Pike Street in the Two Bridges area of the Lower East Side.

The following night, Parrilla, who lived in the East Village, was reportedly giving Huang a ride home in his mother’s car. However, the two friends wound up kidnapped by Down the Hill Gang members and taken to the Bronx. They were both shot and the car was set on fire, with them inside of it.