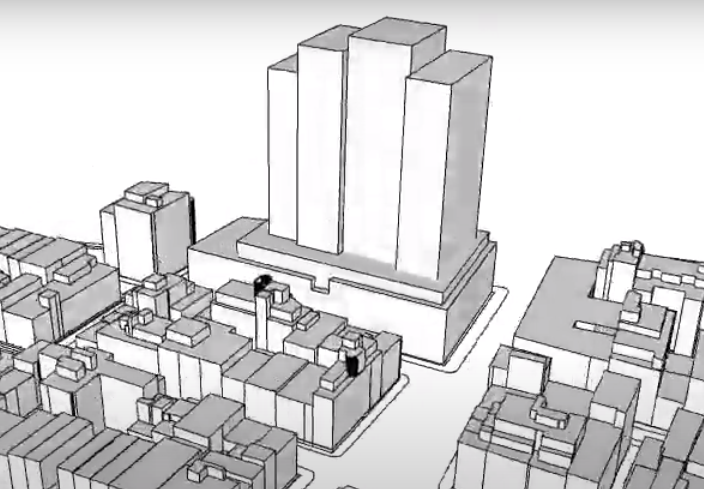 A screen grab from a 3D animation shared by the Seaport Coalition illustrates how out-of-scale 250 Water St. would be in the context of the low-rise South Street Historic District.

The coalition believes that the Landmarks Preservation Commission ignored its mandate on May 4 when it found the Water St. project “appropriate,” despite the design being more than three times the height of any existing building in the historic district. A “zoning buster” is how the opponents describe the Hughes Corp. project.

The coalition’s litigation challenges the decision to grant the “grossly out-of-scale and clearly inappropriate project” an L.P.C. certification of appropriateness.

Representing the coalition is Michael Gruen, an experienced land-use attorney who has a proven track record of litigating against the city and state in important preservation battles.

Gruen, who was one of the first chairpersons of the Historic Districts Council, is also a past president of the City Club, a good-government organization that focuses on land use and historic preservation in New York City. The City Club also opposes the Hughes Corp. building at 250 Water St.

The Seaport Coalition is sharing two videos that show how out of scale 250 Water St. would be with the South Street Seaport Historic District.

The opponents note that air-rights transfers, in fact, were designed specifically to be moved outside the protected historic district area to maintain its unique character.

The Seaport Coalition opposes the project, not only citing its detrimental effect on the Seaport Historic District, but warning of the precedent it would set for historic districts everywhere in the city — a view shared by many historic preservation organizations in the city.

“It’s a full frontal assault on our historic district and our children. It should not be allowed,” said Grace Lee, parent of a Blue School student and co-founder of Children First.

The Seaport Coalition believes Hughes Corp. and the project’s backers are trying to push it through the ULURP approval process before the end of the year, when the terms of the current local city councilmember, borough president and mayor are all expiring.

In finding the massive 324-foot building “appropriate” for the historic district, L.P.C. Chairperson Sarah Carroll argued that the landmarks law was never intended to include height as a deal breaker in deciding what is “appropriate” for a historic district. However, the Seaport Coalition noted this argument ignores precedents from previous L.P.C. commissioners who found that earlier proposed buildings for this site on this scale would “overwhelm and destroy,” the district.

In an unusual move, the L.P.C. allowed Hughes Corp. to link the proposed building at 250 Water St. with $50 million that it claimed would go to stabilize the struggling South Street Seaport Museum — yet only days later reduced that projected number.

Jay Hellstrom of Save Our Seaport noted, “This potentially illegal move demonstrates to developers that there is a price at which the L.P.C. will allow something clearly alien to the district to be built. We fear the L.P.C. decision to green-light willfully speculative real estate dealings in return for money and amenities aimed at coercing elected officials’ approvals is a dangerous and destructive path for the L.P.C. to start down.”

Hughes Corp.’s “gift” to the museum was never a straight donation, the opponents argue, but a repurposing of revenue from the sale of the publicly owned air rights to Hughes Corp. that it needs to build to break zoning limits.

“If the museum is ‘gifted’ any money at all, it will come from our pockets, from the sale of public assets, and not H.H.C.’s,” said Joanne Gorman, a Seaport Coalition activist. “Shockingly, a year ago, the city walked away from a deal that could have earned the museum the much-needed funding by selling the same air rights to an interested developer for use just two blocks away and outside the historic district.”

In response to the lawsuit, a Hughes Corp. spokesperson issued the following statement:

“We are confident the commission’s decision to approve this project was made in full accordance with the Landmark Law and that the court will dismiss this deeply out-of-touch lawsuit, which is nothing more than a desperate attempt on behalf of a handful of project opponents, many of whom are more worried about protecting their [apartment window] views than historic preservation — and some who even think a large tow pound is appropriate for the site in order to protect their views.”