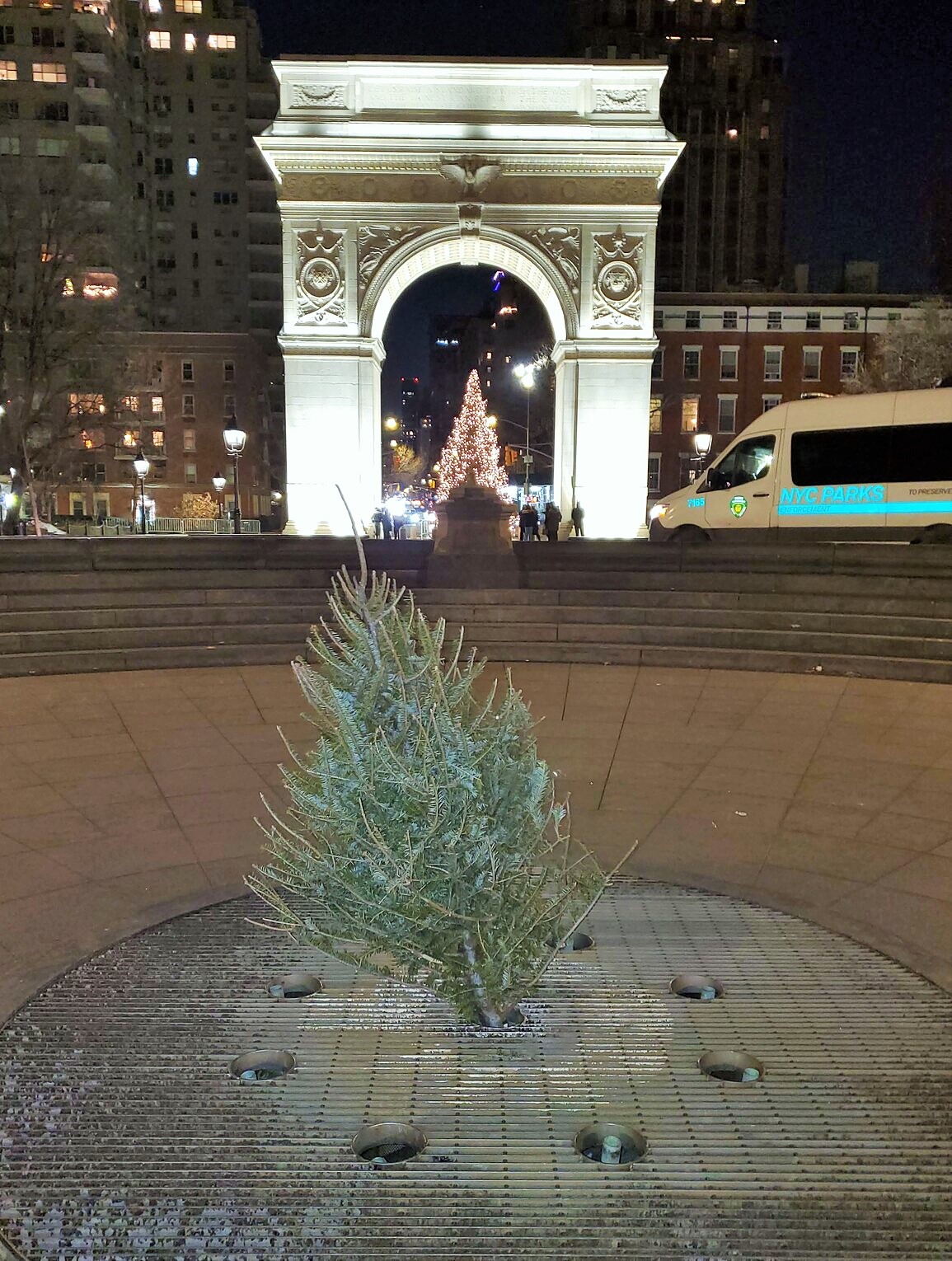 ’Twas the night before Christmas, when all through the park, nary a creature was stirring, save for some tourists by the arch (and a couple of crack smokers on the park's west side). In a warm van Park Enforcement Patrol sat in comfort, sheltering from the Arctic "bomb" front... . (Photo by The Village Sun)

AVENUE REDO: Ydanis Rodriguez, the commissioner of the Department of Transportation, is set on restoring the glory of the Avenue of the Americas, i.e., Sixth Avenue, which once featured lamppost medallions honoring the nations of North, South and Central America. Soho artist Harry Pincus recalled the fate of one of the rusted-out shingles, outside his home, in August 2000. “Our corner, Spring and Sixth, actually had the plaque for the United States of America,” he recalled, “until a shooting occurred on Spring Street and the mortally wounded driver continued across the Avenue of the Americas and plowed into our building, taking the light pole along with him. The U.S.A. plaque was never replaced.”

BECAUSE THE VOTE: Sharon Woolums tells us she was working at a Soho poll site on Election Day and spotted Patti Smith coming in to vote with two young women, maybe one of whom was her daughter. “Might you be who I think you might be?” Woolums asked the “Power to the People” singer. “I might be,” Smith responded. “I told her I loved her book ‘Just Kids,'” Woolums said.

SIGHTINGS: Speaking of celebrity spottings, we recently saw actor Matthew Modine dropping off something for a friend near Washington Square Park and also comedian Jim Gaffigan walking his very intelligent-looking German shepherd across the Bowery into Noho.

CHEECH AND CHARAS: “What is CHARAS?” Ali Akmal asked after we handed him a stack of our December monthly print issue and he flipped a paper open to an article on the CHARAS mural project. Akmal was psyched to get the paper in his New University Pen and Stationery store, at 144 Bleecker St. We explained that CHARAS is an acronym made up of the first letters of founding members Chino, Humberto… . Before we could finish, he said, “I hope they know the meaning of ‘charas’ in Hindi is hashish — weed!”

BOOK ’EM, RONNO! We’re looking forward to Ron Kolm‘s new “The Bookstore Book.” Kolm, who has worked everywhere from the Strand to the former Coliseum Books to now Posman Books in Chelsea Market, has been publishing poems about bookstores for years. “I’ve done 50 years in them!” he said of his impressive bookselling stint. He recalled one time when he was working at East Village Books and Valerie Solanas, the radical feminist who shot Andy Warhol, tried to sell him some tomes. Linda Kleinbub will be publishing the book via her Pink Trees Press.

TASTY NEW COLUMN: The Village Sun is happy to welcome aboard Caroline Benveniste and her Comings & Goings column about restaurant and retail openings and closings in the neighborhood. She formerly wrote it for WestView News as In & Out. As you can see by reading her column, she covers a lot of ground. Although Greenwich Village and the West Village have been her main turf, she’s going to try to extend eastward, too.

ADIOS, N.Y.U.: After four decades as a top administrator at New York University, Lynne Brown retired in November. She was most recently a senior vice president for university relations and public affairs. Before she left, we asked to interview her about her tenure, but she politely declined. “Thanks for thinking of me,” she said. “But I am both swamped with trying to finish up all my outstanding projects and, candidly, more absorbed with thoughts of the future than reflections on the past.” As for what’s next, she said, “Nothing specific or planned out. A friend told me the Spanish word for ‘retirement’ is ‘jubilacion’ — a much lovelier word to my mind. So that is what I will be doing: taking joy in time for myself after 40 years at N.Y.U.”