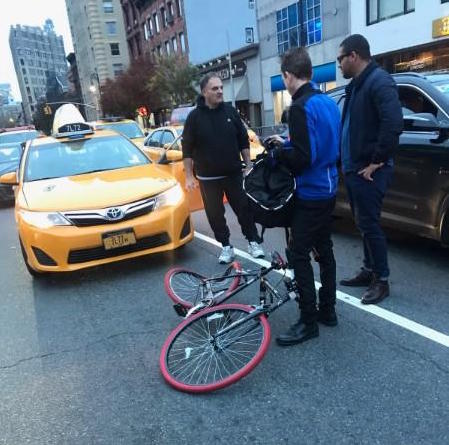 PRO-CYCLIST SCHWARTZ: East Side, West Side, all around the town… . Arthur Schwartz seems to be everywhere, waging pro bono lawsuits on behalf of community members: He’s battling the 14th St. busway, getting set to sue the city over the East Side Coastal Resiliency project and in court fighting Mount Sinai Health System’s plan to close its Beth Israel Hospital in Gramercy and rebuild a mini-hospital on E. 13th St.

Some local politicians, from the sound of it, are hitting the roof about the coastal resiliency suit, which Schwartz announced last week. Meanwhile, the attorney’s busway lawsuit — which twice delayed the pilot project’s launch — earned the ire of Transportation Alternatives and cyclists, who raucously picketed his house. That lawsuit also seeks to roll back the new crosstown bike lanes on 12th and 13th Sts.

So, it may then come as a surprise that Schwartz is going to bat for a bicyclist. The neighborhood social networking site Nextdoor recently blew up after local residents saw an ugly interaction between an irate cabbie and a cyclist. Basically, as Schwartz explains it, the hack claimed the cyclist cut him off at Sixth Ave. and Eighth St., where there is no bike lane.

The driver, identified as Steven Heretakis, of Hen Cab Co., in Brooklyn, got out of his vehicle and berated the biker, then got back in and promptly rear-ended the bike as the cyclist was riding it, totaling its back wheel.

The cyclist, John Gray, in his 30s, from the East Village, was uninjured. The crazed cabbie tried to drive off but good Samaritans kept him from leaving the scene.

Police responded and filed a report — yet, to onlookers’ dismay, declined to issue the cabbie a ticket.

Schwartz promptly fired off a formal complaint to Chris Wilson, deputy commissioner for legal affairs at the Taxi & Limousine Commission, concluding it by saying the hack should be banned.

“Driver Heretakis should not be driving a taxi or operating a For-Hire Vehicle in New York City or anywhere else,” the attorney wrote. “We request that the TLC revoke his license.”

Now will TransAlt and Streetsblog finally give Schwartz a break?

STILL LOVIN’ IT: Mark Sebastian, who, with his big brother John, co-wrote the Lovin’ Spoonful’s classic 1966 monster hit “Summer in the City,” was back in town from the West Coast recently and made the rounds to some of his favorite spots. He sent us a quick note:

“I was just in New York for a family visit and made forays to Gem Spa for an egg cream, Ray’s Candy Store for a chocolate soft serve and Carmine Street Guitars. I used to help Rick [Kelly] haul huge beams from townhouses being renovated. He makes guitars out of the ‘king’s wood’ and made me a Telecaster as a gift before I left New York.

“Ray’s is half the price of Big Gay Ice Cream down the street! I always patronize Gem Spa so it won’t go away.

“I walked through the park (whined to myself over the moving of the Holley statue) and had a bite at Gene’s. Walked into Raffetto’s and stood in front of some important landmarks in what I laughingly call my career.”

We knew the Garibaldi statue had moved, but not the Holley monument. But then, again, they have also moved the fountain to “align” with the arch — so what haven’t they moved!

“Anyway,” Sebastian continued, “I often feel as if I was fired from New York City by my economic stature or lack thereof, so my empathy is strong. N.Y.U. gave me notice at Christmas, which I always thought was quite Dickensian.

“I’m still a Villager, though, and can have a pint at Knickerbocker’s or Gene’s and feel perfectly at home. I was born on 10th St. between Sixth and Fifth Aves., so Gene’s feels especially homey.

“Coraggio [courage], as we Italians say. I’ll keep the lines up.”

Sebastian is shown in the photo above with Kelly at Carmine Street Guitars, giving him a copy of his most recent album, “The Real Story,” released four years ago. The record’s cover was inspired by a Robert Mitchum noir film poster.

Sebastian is currently working on material for a new project, “The Way Back Home,” with famed producer Joe Wissert. You can hear one of the first songs he cut, “You Made a Monkey Outta Me,” with musicians James Gadson and Bob Glaub, here. We think it’s got a bit of a Steely Dan, jazzy swing, check it out!

HART-FELT VOTE: During the City Council meeting on Oct. 14 when the Council unanimously approved the East Coast Resiliency project, they also voted to shift Hart Island from control of the Department of Correction to the Parks Department.

A 100-acre potter’s field with 1 million people buried on it, Hart Island is one of the largest mass burial sites in America. It’s where the city’s homeless and poor have been interred, mostly in unmarked graves, since the 1800s.

Council Speaker Corey Johnson gave a heartfelt speech supporting the transfer, noting that he was deeply affected, earlier this year, when he saw that victims of the AIDS crisis had been buried in a separate section there because of fears of the disease.

However, Mark Gjonaj, the councilmember from the Bronx’s 13th District, who represents Hart Island, twice spoke out forcefully against the transfer during the meeting, saying the island would be worse off for it. It was a bit curious, though, because he didn’t really get into specifics as to why he felt that way.

LEELIKE MEMORIAL: David Leelike and his family will be hosting visiting hours in memory of his mother, late East Village activist Susan Leelike, at Peter Jarema Funeral Home, at 129 E. Seventh St., on Sat., Dec. 7, between 1 p.m. and 3 p.m. Leelike died on Oct. 26 at age 81. Anyone who wishes to pay their respects to Susan and to share remembrances of her with family and friends is welcome to stop by.

WORD ON THE STREET: A self-described “anonymous tipster” gave us a rundown of local comings and goings…well, actually, mostly goings.

The popular hole-in-the-wall Indian eatery Lahore, just north of Housing Works Bookstore and Cafe, on Crosby St., has been chained shut with a Board of Health notice on it.

The also-popular Bagels on the Square, at Father Demo Square, is closed for renovation, but no renovations are in progress.

The “dreadlocked Peruvian guy” who got lots of bad ink in the New York Post last year about his camping out by Silver Towers and Morton Williams supermarket, at Bleecker St. and LaGuardia Place, is suddenly absent amid some sidewalk work project.

“I saw him on the street today and he said he was at another park and said the work was supposed to take only eight days,” our man on the street tells us. “Always smoking likely weed and may want to return to his spot. Polarizing but he has his supporters.”

Also, Sweet Life Cafe, the breakfast and lunch place on Christopher St., will be losing its lease in March after 25 years.

“John, the owner and manager, is a big-hearted guy,” our source said.

LATEST ‘POLL’: West Village activist Lynn Pacifico said people were talking up the paper at one of the Village’s biggest voting sites on Election Day earlier this month.

“Congrats on The Village Sun!” she wrote us. “We were all talking about it at the P.S. 3 election poll site.” 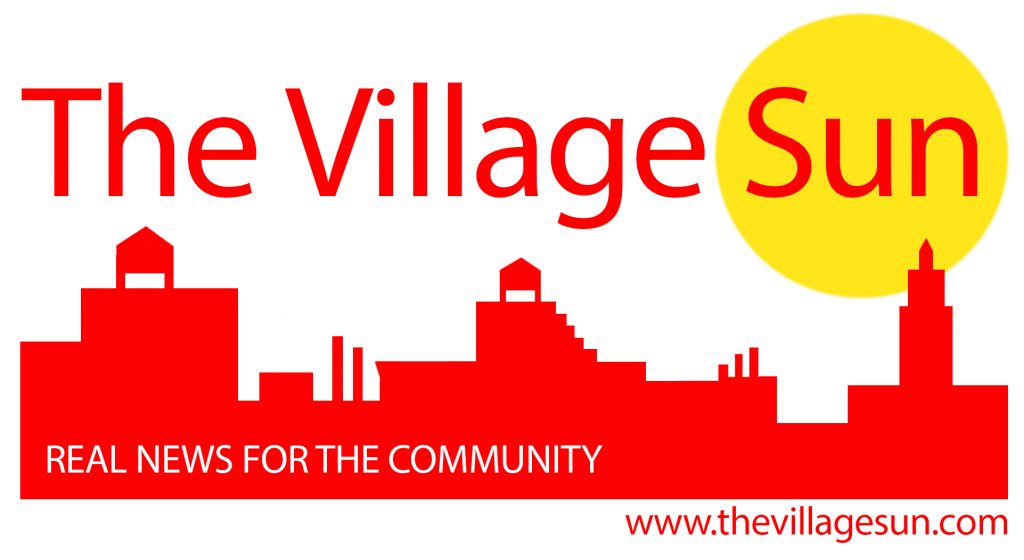