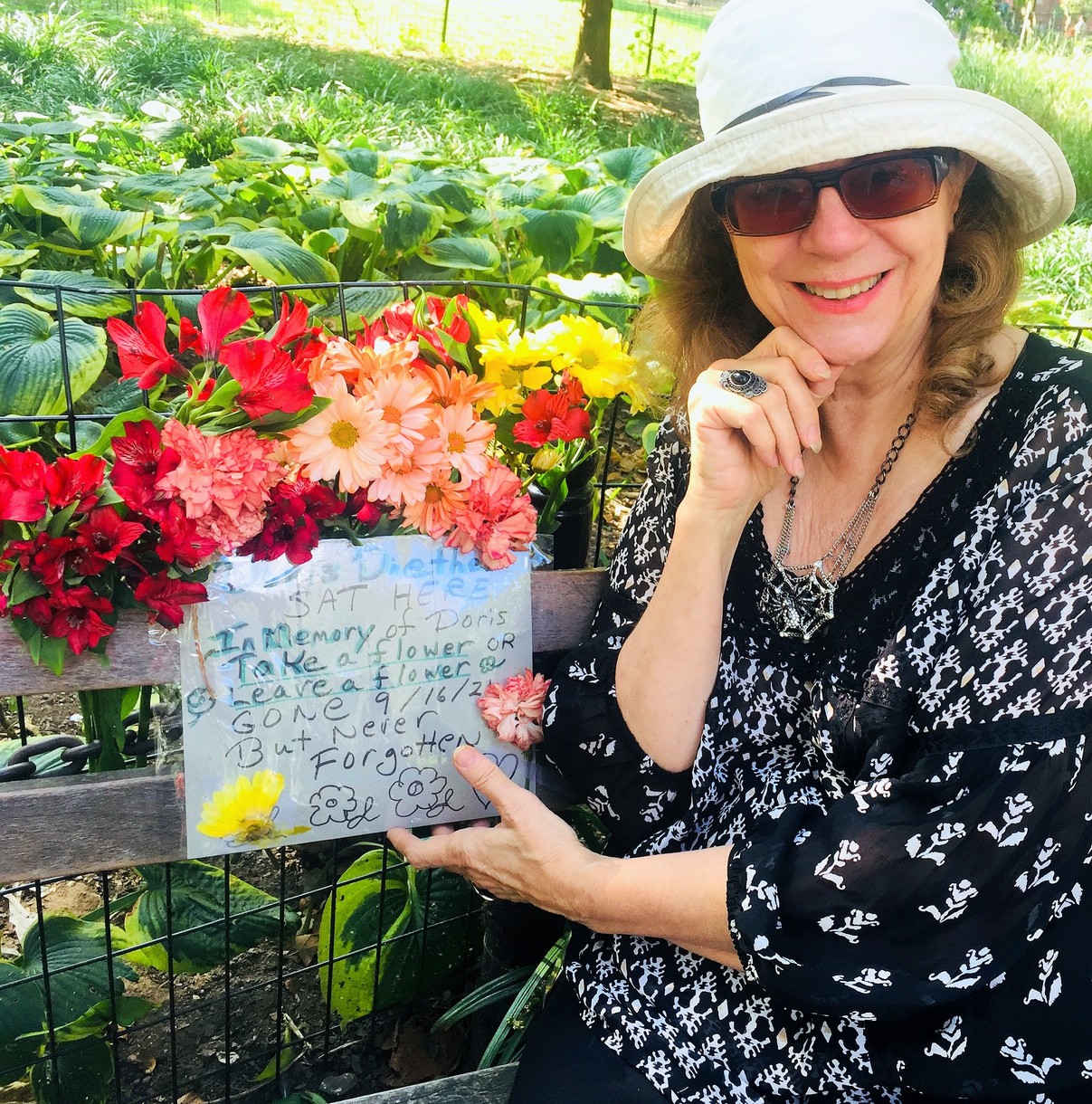 Sharon Woolums with what could become the Doris Diether memorial bench in Washington Square Park. (Photo by Lois Rakoff)

October 16, 2021
BENCHMARK MOMENT: Doris Diether, the legendary Community Board 2 “zoning maven” and Jane Jacobs ally, who died at age 92 on Sept. 16, loved to spend time in Washington Square Park, just across the street from her home. Fittingly, some of her friends have come up with the idea of honoring her there with a “Doris bench.”

We hear Lois Rakoff, a fellow C.B. 2 member, came up with the thought and shared it with Sharon Woolums. The bench naming would need to be approved by the Parks Department.

In the meantime, on a bench across from the Alexander Lyman Holley bust on the park’s west side, where the activist often sat, the pair have placed a makeshift sign with flowers in her memory.

A memorial for Diether will be held in Washington Square on Sat., Oct. 23, from 2 p.m. to 4 p.m., in the Garibaldi Plaza, just east of the park’s central fountain plaza.

SCREW IT! Speaking of local legends, Richie Gamba, “The Mayor of Spring Street,” had an operation last month, a few days before his 85th birthday, after which he recovered at the VillageCare rehab facility on W. Houston Street.

STILL ATTACKING THE VAX: Taking a detour away from local legends for a moment, remember Liz Glass, who ran against state Senator Brad Hoylman in the June 2020 Democratic primary election? Hoylman won handily with 74 percent of the vote to Glass’s 26 percent. Anyway, Glass and her supporters objected to her being called an anti-vaxxer, saying they prefer the moniker “pro-health choice.” However she defines herself, she’s been busy on Instagram posting about the evils of the coronavirus vaccine, government mandates and workers being fired for not abiding by them. Here’s one of her posts that we can actually almost understand…sort of:

ACHTUNG, RAY BABY! Photog Jefferson Siegel passed by Ray’s Candy Store on Avenue A the other day and got the news. He said Ray Alvarez told him that German TV had been in touch with him and maybe would stop by to do a story.

Also, Ray briefly lost most of his employees because they were students who went back to school — but he has since hired enough people to cover the place.

PARTY IN THE PARK: