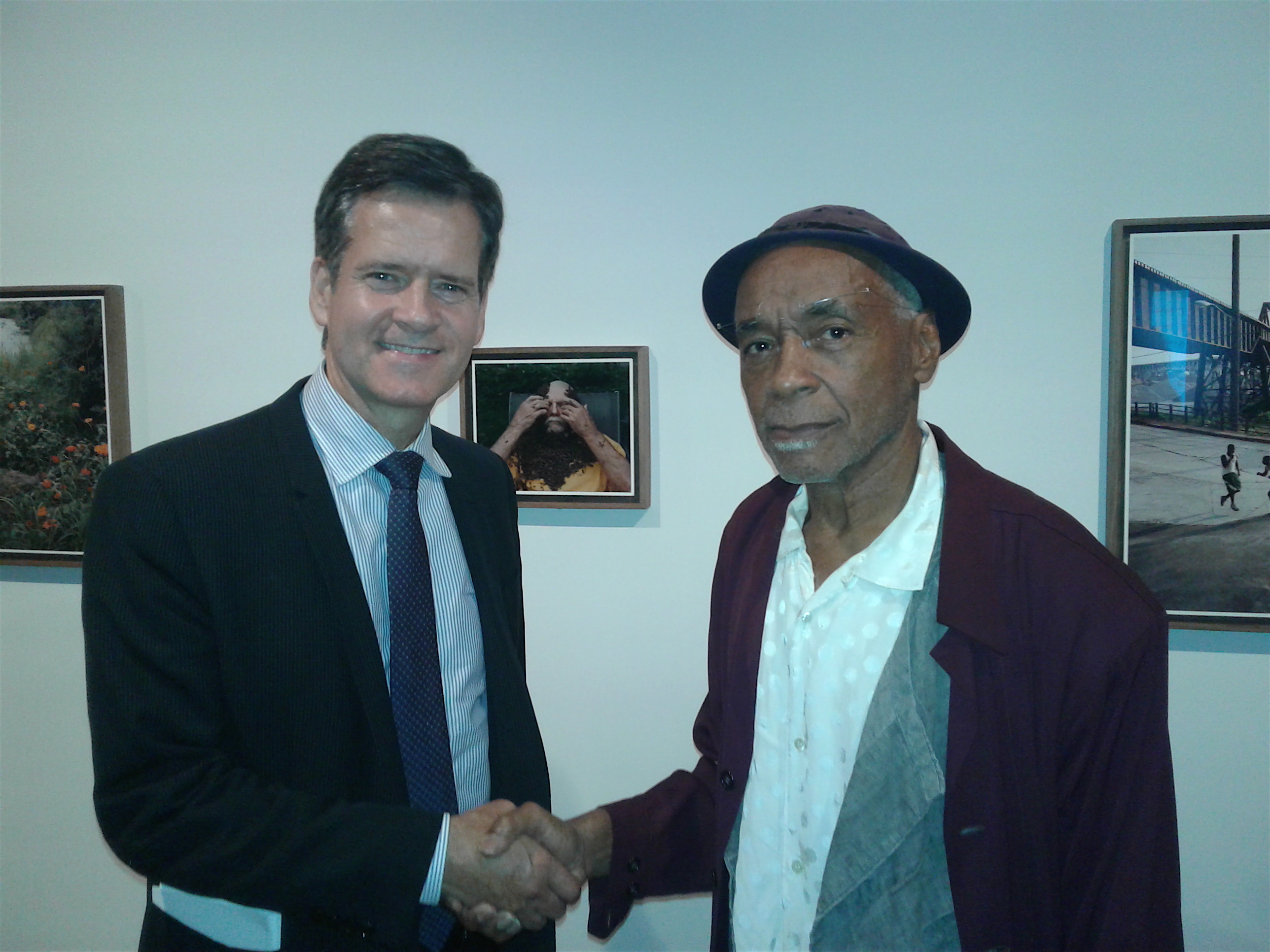 THE ART OF POLITICS (OR THE POLITICS OF ART?): They say David Hammons can be a pretty hard guy to get a photo with, but state Senator Brad Hoylman “handily” pulled it off at the recent groundbreaking party at the Whitney Museum for the artist’s “Day’s End” public artwork on the south side of Gansevoort Peninsula. Hammons’s piece will delineate the ghostly outline of the former Pier 52.

We asked him about the artwork he created at the late Steve Cannon’s former Gathering of the Tribes space in the East Village. Five years ago, when Cannon was forced to vacate the space, the section of wall — which was painted red, with wire and hair, Hammons noted to us — was cut right out and removed to save it.

MUSICAL CHAIRS: Speaking of politics, word had been out there for a while now that Manhattan Borough President Gale Brewer, who faces term limits, aims to run for her former Upper West Side City Council seat in a couple of years. Meanwhile, it’s no secret that Helen Rosenthal, who currently holds the Council seat and is also term limited, is eyeing a campaign for city comptroller. A progressive political icon in Manhattan, Brewer would be an absolute lock, of course, to win her former district.

One Downtown politico, however, grumbled that someone else should get a chance at the coveted Upper West Side Council seat.

HALAL HEAD SCRATCHER: We recently bumped into photographer Jefferson Siegel and Village activist / news fan Robert Reiss on Washington Square South and they pointed out a curiosity to us across the street: The halal cart outside the New York University Global Spiritual Life Center has the usual words in its scrolling electronic sign — O.K., admittedly one or two of them might be slightly misspelled — but, surprisingly, also the word “Presbyterian.” In fact, if you take the time to watch the words roll by, you’ll see it actually says, “Presbyterian Halal.”

Maybe this is a gesture to interfaith gustatory harmony? Or perhaps the Presbyterians are horning in on the halal trade? (Onward, Christian grillers?) Who knows? When we asked the woman inside the cart about it, she politely declined to respond, saying her English was limited. Oh well, there was no mystery, at least, about her chicken on a skewer: It was delicious.

THE LONGEST YARD: Assemblymember Deborah Glick is a big sports fan, and, in particular, a huge football Giants fan. In fact, you can follow her tweets about the team on game days. (Perhaps there will be a spot for her in the sportscasters’ booth someday.)

Anyway, Glick was a big advocate of replacing quarterback Eli Manning last season, and this season, as well, after Big Blue got off to another dismal 0-and-2 start.

After the Giants’ Week 1 drubbing by the Cowboys, Glick told us, “I don’t understand what the emotional content is for the Giants’ argument with the attachment to Eli. Last year, he had the best completion record [of his career] — yes, if all your passes are five to 10 yards.

“The last four minutes of the Texans-Saints game was more exciting than the entire Giants game,” she scoffed, adding, “Drew Brees, the guy is incredible.”

As for that rollout by Manning during the Cowboys game on a critical down that went nowhere, Glick said, incredulously, “Why are they giving him the ball? He’s not known as a running quarterback. … It’s going to be a long season.”

But her tweets turned a lot more positive in Week 3 with Manning on the bench and Daniel Jones under center.

ON THE MEND: Former East Village activist John Penley recently had a major scare when he suffered a stroke — and then some — in North Carolina. Penley has been living down South, where he grew up, in recent years after being priced out of New York City shortly after Occupy Wall Street.

“I was in the hospital for a week,” Penley told us recently, sounding pretty good on the phone. “It was a solid heart attack and two strokes. I lost some of the mobility in my right hand — it’s hard to sign my name. I’m on rat poison — Warfarin – it’s a blood thinner.”

In fact, Warfarin was developed as a rat poison in the 1940s, though Big Pharma soon realized it had its human uses, and profit potential, as well.

“I didn’t know I had a heart attack,” Penley related. “The strokes were what let me know I had something. I felt like a wave of numbness that went down the right side of my body, from my head to my toes. It happened twice. They said, You had a stroke. I’ve never been hospitalized before.”

The activist and former photojournalist, who served in the Navy during the Vietnam War, has been getting good treatment at the Veterans Administration hospital.

“I’m lucky I was in the service,” he said, though adding the V.A. almost gives too much care, checking out every little thing to the nth degree.

Penley used to smoke at least a pack a day of cigarettes. But one of the first things they told him is to give up butts.

“I quit. I quit in the hospital,” he said. “They said, ‘Look, we’re just wasting our time if you keep smoking.’

“My heart is about 40 percent pumping [capacity],” he said. “I had some varicose veins in my leg and they went away after I stopped smoking.”

On another note, Penley said there seems to be a big interest in Keith Haring in Europe right now. Museums and galleries across the pond keep requesting use of a photo of his of the late Downtown artist at a City Hall protest decrying Mayor Ed Koch’s lack of response to the AIDS crisis.

“I think that movie ‘Bohemian Rhapsody’ sparked interest in the AIDS epidemic and that period of time,” he surmised, referring to last year’s pic about Queen’s Freddie Mercury.

Finally, Penley is working with attorney Stanley Cohen on getting a permit for a protest site outside next year’s Republican National Convention, in his home state, in Charlotte, North Carolina.

He predicts there will be intense and probably violent clashes.

“I just don’t see how they can avoid a lot of troubles at the convention,” he said, “with the alt-right, the North Carolina Klan and the neo-Nazis and people that don’t like them. Charlotte’s a pretty black city. They’re gonna be a lot of arrests at this one.”

CORNELIA WAS POPPIN’: The recent Cornelia Meatpacking event was a big success. Former headliners from the sadly departed Cornelia St. Cafe performed in the newly renovated Gansevoort Plaza space, among them, the legendary David Amram and jazz pianist Arturo O’Farrill.

O’Farrill and his trio played classics like “Summertime” and “Chinas & Criollas,” the latter an homage to the Cuban-Chinese restaurants that once proliferated on upper Broadway and symbolized the city as melting pot.

“You are welcome in New York, no matter where you come from,” O’Farrill told the audience.

Encouraging people to get up and shake it, he said, “You gotta dance through this period in history. Because when the going gets tough, the tough get dancing.”

However, Hirsch told us later, “That’s in his mind. We always imagine that something that had a long life won’t just fade away. But right now, we’re doing pop-ups.”

That sounds good, we said, focusing on pop-ups.

Well, the flow was sounding very good at Gansevoort Plaza!

Hirsch’s next pop-up was Oct. 3 at Integral Yoga, on W. 13th St., when he read a chapter from his sweeping memoir, “Last Dance at the Hotel Kempinski,” which he penned in the ’70s. The event was filmed for a movie about Hirsch and the Cornelia St. Cafe.