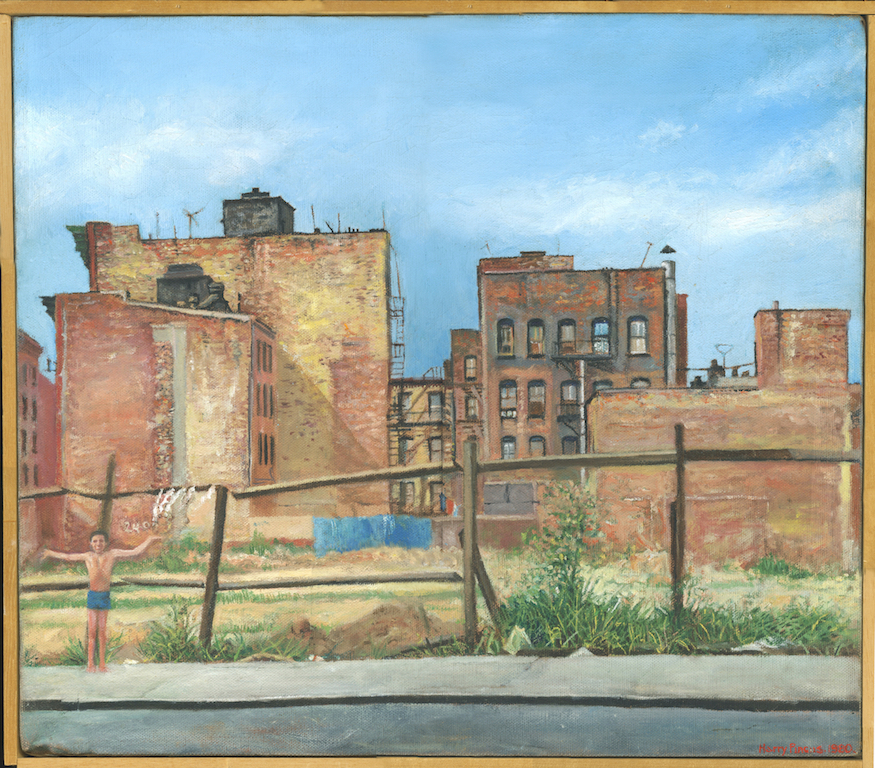 Soho artist Harry Pincus made this painting, "The Lot on Mott St.," while sitting on the sidewalk across from the space in 1980. Today the lot is home to the Elizabeth St. Garden. (Painting by Harry Pincus)

Save Soho from mad stampede of greed

BY HARRY PINCUS | Mary Rolland is a real estate agent, and she is speaking in her column in The Village Sun (“Rezone within reason: Remove Soho’s barriers to retail”) for those interests, and not for certified artists like me. Your lovely old black-and-white photograph may be “the past which no longer exists” but kindly remove us certified artists from your dustbin.

Those of us who first arrived in deserted old factory buildings with broken floors and doors that were flapping open in the wind, had little more than sweat equity, as well as our hopes and dreams, when we clawed homes and studios out of deserted factories in the 1970s. As we enter our old age, we are now endangered by Ms. Rolland and her ilk.

I for one, do not have a condo in Sun Valley to repair to, but I do have two lawsuits, one in New York State Supreme Court, and the another in the Southern District of New York, where I am fighting to defend the legal Joint Living Work Quarters for Artists apartment to which I have devoted my life. I pulled all-night deadlines for award-winning newspaper illustrations here, printed etchings that I sold on the street here, and my wife and I raised two children here. There is not an inch of our apartment that I did not scrape and paint and have to fight for.

My building is now owned by wealthy absentees, speculators who sublet illegally or keep entire floors vacant, and I am the only certified artist who still lives and works in my original Joint Living Work Quarters for Artists (J.L.W.Q.A.) apartment. Because of the ongoing litigation, I cannot speak about my situation with any specificity, but suffice it to say that all my wife and I are asking for is the right to remain in the legal home where I have worked and lived for nearly half a century.

Neither my original 1975 stock certificate, my 46-year-old lease, my certification as an artist from the New York City Department of Cultural Affairs, stamped work permits, a “letter of completion,” a passed Department of Buildings audit, nor basic human decency, mean a thing in the face of the mad stampede of greed that has swept through our neighborhood and taken possession of our co-op.

We all have to pay taxes, and we all hope that commerce will return when the epidemic finally subsides. In our building, a legendary restaurant closed, and the co-op needs to rent out the space. But it is not necessary to push out the last artist, or to demolish nearby buildings where people are living, in order to build enormous, out-of-scale condos.

My artist certification was earned by my hard work, and serving me with eviction threats or suing me because I still live here is not “progressive.” I’m happy to see that Ms. Rolland is able to earn a living as a real estate agent, if she couldn’t earn a living as an artist, but please have some respect for those of us who simply want to continue on as artists.

Artists certifications were intended as protections, offered by the City of New York for the good work that we artists were doing to reclaim Lower Manhattan, when it was deserted and worthless. After Robert Moses’ 22-year battle to demolish Soho and build a superhighway was defeated, the area that came to be known as “Soho” was thought of as nothing more than an undesirable anachronism. It was the artists who saw beauty in the old buildings, and lovingly scraped and painted and preserved them.

Tearing out what is left of the creative heart and history of Soho is both brutal and thoughtless. You will not create value by destroying one of the few historical districts that remains. European cities like Venice, Amsterdam and Rome are well aware of the value of their legacy, but we seem to be prepared to do what we did to Penn Station!

No one is demanding artist certifications anymore, and only about 3,000 were ever issued. Those of us who earned that certification long ago, however, were pioneers, and we have a right to stay here. Real estate agents like Ms. Rolland have no right to “gently usher” us out of our homes.

We deserve to keep the protections that the City of New York promised us, when we gave you the golden idol that you call “Soho.”