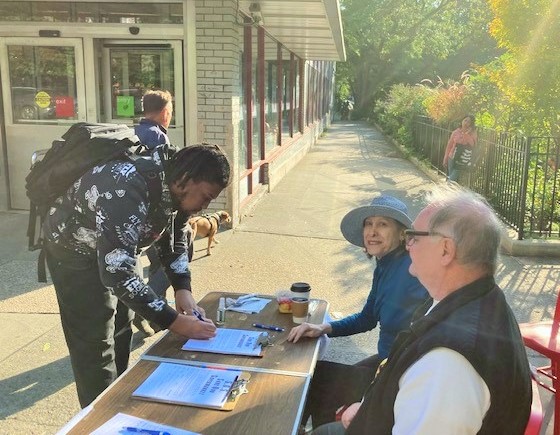 Susan Goren and Ray Cline have been collecting petition signatures outside the Morton Williams supermarket for the past month. (Courtesy Susan Goren)

BY THE VILLAGE SUN | The group Save Our Supermarket, which has been leading a petition drive to keep the Morton Williams market in Greeenwich Village from being displaced, is taking its fight online.

As reported by The Village Sun, S.O.S. by Friday had already gathered more than 5,000 print petition signatures. As of Saturday that number had reportedly spiked to 6,100.

In addition, on Thursday, the group launched an online petition on change.org, which as of Saturday afternoon had garnered 43 signatures.

The supermarket has been earmarked as a possible site for a special-needs public school, which — according to a previous statement by the School Construction Authority — would be a stand-alone project, meaning, not including a market.

The online petition calls for keeping the centrally located, full-service, 24-hour supermarket on the New York University-owned “superblock.” The extra-large block — bounded by Bleecker, Mercer and Houston Streets and LaGuardia Place — was created by demapping Wooster and Greene Streets more than 60 years ago.

The petition also raises concern that construction of a school at the site would destroy the adjacent LaGuardia Corner Gardens.

“We support the creation in our community of a new public school to serve students with special learning needs, but remain confident that the City can create a school without supermarket dislocation,” the online petition states.

“We also call upon the City to assure the continuation without dislocation of the vital, abutting, award-winning LaGuardia Corner Community Gardens, at a time when we recognize the critical nature of such green garden space.

“We further call upon New York University, which benefitted from zoning changes, to live up to the commitment N.Y.U. made during that rezoning process to ensure the supermarket’s continuation on the Superblock. We call upon N.Y.U. to do so by facilitating the location of either the supermarket or school on its grounds, which would best serve university faculty and students, as well as the needs of our diverse community.”