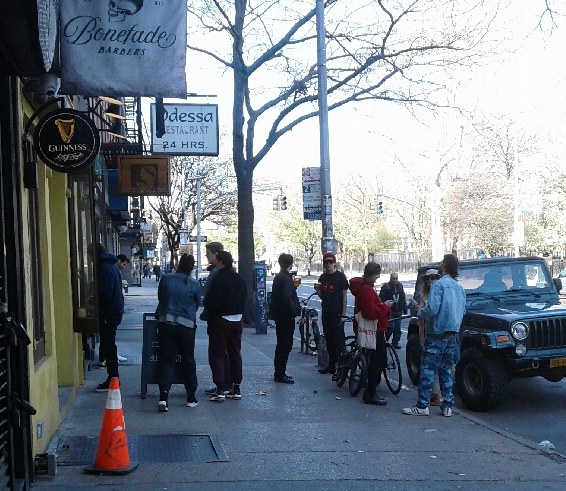 People hanging out and drinking in front of St. Dymphna's bar on Avenue A back in mid-April, early on during the pandemic. (Photo by The Village Sun)

Forget about luck of the Irish. Luck runs out when you get “three strikes,” according to the State Liquor Authority.

St. Dymphna’s is the latest East Village bar to have its liquor license summarily suspended during the pandemic.

The Avenue A watering hole was on the latest list of 16 pubs to be punished for violating coronavirus safety rules, as announced by Governor Cuomo on Tuesday. Six of the alleged bad-actor bars were in Manhattan — mostly Uptown — three were outside New York City, in Utica, Mohawk and Long Beach, and the rest were in Brooklyn, the Bronx and Queens.

Investigators with the state’s multiagency task force visited St. Dymphna’s, at 117 Avenue A, between Seventh St. and St. Mark’s Place, on Tues., Aug. 11.

According to Cuomo’s announcement, the investigators said they “observed numerous patrons standing, drinking and ignoring social distancing guidelines outside the premises, with multiple customers observed ordering beverages from a takeout window. Investigators checking sales receipts found that practically no food was purchased with orders that evening, in violation of the governor’s executive orders.

“This was the third strike for this business, a repeat offender that the S.L.A. had charged for violating the governor’s executive orders on June 26 and on Aug. 10.”

The S.L.A. will eventually consider whether to allow the bar to pay a fine and reopen or permanently pull the license.