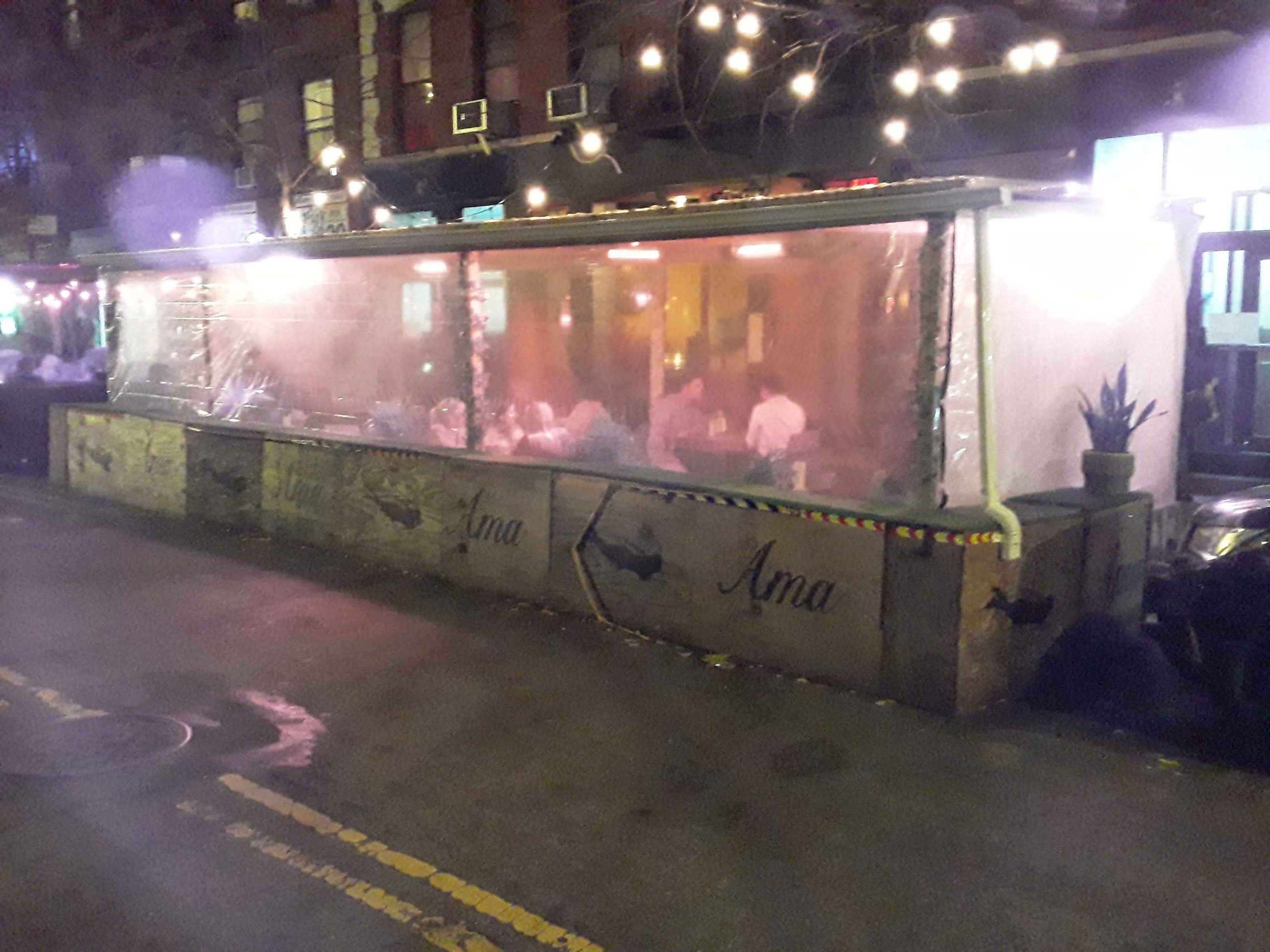 An Open Restaurants cabana on Avenue B. With the cold weather, many of the structures have become increasingly enclosed, defeating their original purpose of helping stop the spread of COVID by being in the open air. (Photo by The Village Sun)

BY LINCOLN ANDERSON | Updated Fri., Dec. 4, 4 p.m.: Bars and restaurants hail the city’s Open Restaurants program as a lifeline amid the pandemic. Many New Yorkers love the new nightlife option and have been partaking of it.

“Like Paris” is how some romantically describe the proliferation of outdoor dining.

Despite the program’s popularity, though, it remains to be seen how Open Restaurants will fare through the depths of a Big Apple winter.

Meanwhile, a new coalition of civic, block and tenant groups and individuals from all across the Downtown area — from West Side to East Side — is now rising up to fight the plan. Their main beef, and the reason they decided to organize, is that the program was initially approved — and later decreed permanent — with zero community input.

They call themselves New Yorkers for Safe Open Streets, or S.O.S. for short. So far, they have held two virtual organizing meetings, mostly focused on drafting a “mission statement.”

According to Village District Leader Arthur Schwartz, who is an organizer of the effort, it will surely result in a lawsuit being filed against the city to rescind the program.

“Definitely, there’s no question” there will be a suit, he said. “First of all, [the Open Restaurants law is] just plainly arbitrary and capricious. I compare it to when Bloomberg banned large cups of soda but they didn’t ban large bottles of soda.

“Why can only restaurants operate on the street? Why not everybody? Retail operators can put stuff out on the street, but then they have to take it in at the end of the day.”

He was referring to another, more recent, pandemic-inspired initiative from the de Blasio administration, Open Storefronts.

“Most of these structures don’t leave space for emergency vehicles,” Schwartz continued, referring to Open Restaurants. “They block fire hydrants. There’s not [the required] 8 feet of sidewalk clearance — not in the Village. The only place I’ve seen that much clearance in the Village is on Sixth Ave.

“The [outdoor] structures, there’s no uniformity,” he continued. The program “doesn’t take into account noise regulations. …”

In short, Schwartz said, there is no shortage of points for a lawsuit to attack.

“When a law is so inconsistent and so full of holes, I think it’s something that very quickly a court will knock down,” he predicted. “It was not well thought-out. … And what’s the rationale for having it after COVID [is over]?”

On top of everything, the attorney said, there’s currently “no enforcement” of the published guidelines for Open Restaurants. For example, a diagram on the Department of Transportation’s online application form for the program clearly states that seating on the sidewalk adjacent to the curb is not allowed — yet some restaurants are clearly doing this.

“There’s no seating on the sidewalk adjacent to the curb and you need [to leave] an 8-foot path,” Schwartz stressed, adding that both of these regulations are being widely violated.

The City Council voted on Oct. 15 to extend Open Restaurants for another year, with the Council assuring that the program would definitely be made permanent after that.

The scheme’s signature feature is that it allows establishments to use the parking lane outside their premises for outdoor seating. Again, to many local residents’ outrage, the City Council — despite not seeking public input on the matter — has vowed to permanently legalize this street setup.

The finalized S.O.S. mission statement was not yet approved for publication by press time. However, The Village Sun obtained a draft.

To paraphrase, the statement opens by charging that the Open Restaurants law was approved without any public debate and input, and ignored the community board and ULURP process, referring to the city’s typical public review.

“While the members of NYSOS do not oppose safe emergency efforts to keep New York’s small businesses, including local restaurants, alive during the pandemic, the permanent taking of public space, with little or no regulation, is just plain wrong,” the in-progress statement declares.

The group’s ultimate goal is stated clearly: to rescind the law that made the Open Restaurants program permanent.

Other demands of the coalition are that the outdoor dining structures be safe, in terms of not blocking emergency vehicle access on the streets or crowding pedestrians on the sidewalks; and if the structures are tents or huts, that they must be adequately ventilated and COVID safe.

In addition, according to its mission statement-in-progress, the group says that State Liquor Authority laws must be complied with, noise regulations must be followed, fire hydrants must not be blocked, and outdoor heating for the exterior dining areas must follow the city’s fire code.

Schwartz — who is a candidate for City Council in District 3 — noted that a number of prominent Downtown activists are part of the effort. He cited, for example, Marilyn Dorato, president of the Greenwich Village Block Associations, an umbrella group that includes multiple block associations.

Another is Ayo Harrington, a former member of Community Board 3.

“Ayo is definitely going to play a leadership role in this,” Schwartz said.

Stuart Zamsky is an officer of the E. Fifth St. Block Association, a member of the S.O.S. coalition. He said, “it’s crazy to give a pass” to Open Restaurants, especially in a freewheeling place like the East Village.

“I believe that our goodwill toward restaurants in this time of COVID has either been misinterpreted or taken advantage of,” Zamsky said. “As much as we want restaurants to survive and thrive, this seems like an inappropriate time to usher in outdoor dining on a permanent basis and especially without public input.

“My block and block association have worked for years to support local operations while insisting that they be good neighbors. It is a fine line to walk,” he noted. “In light of the current atmosphere, which in the East Village seems like the Wild West, it seems crazy to give this a pass without some real forethought.

“I am deeply troubled that my City Council representative, Carlina Rivera, would support this without consulting with her constituency — which, being the East Village, is already problematic when it comes to oversaturation of bars and restaurants,” Zamsky said. “I am not saying that I am necessarily against outdoor dining, but I do feel that we, regular New Yorkers, have been removed from the process and it makes me wonder why?”

Similarly, Schwartz added that S.O.S. members don’t want to be dismissed as NIMBYs who are not supportive of the hospitality industry during a moment of crisis, and that they are crafting their mission statement to reflect that.

“Everyone wants the first statement to be ‘We all support our restaurants,'” he said. “Nobody wants to be known as NIMBYs.”

He said whether the entire S.O.S. coalition sues remains to be seen, that maybe only certain groups or individuals will sue — but that, one way or another, there definitely will be a lawsuit.