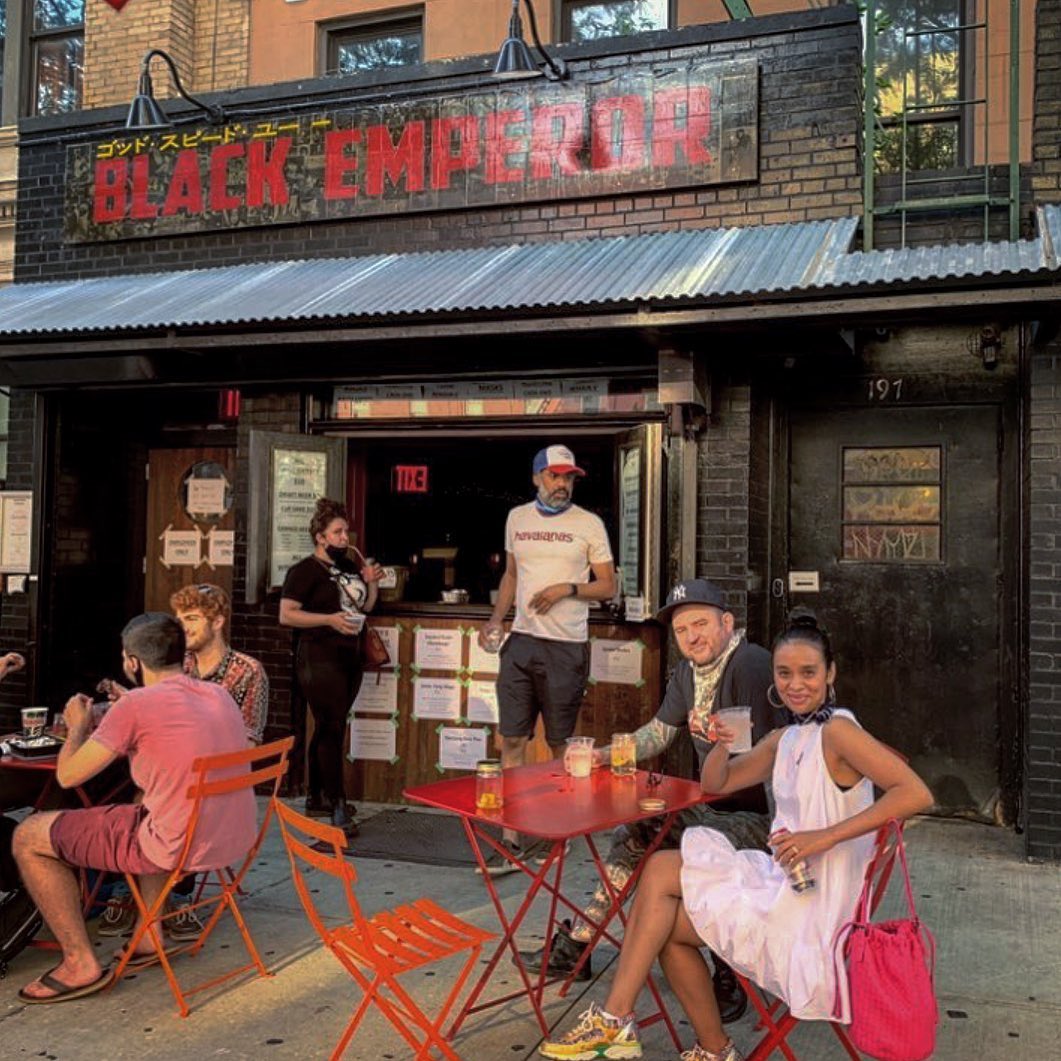 Black Emperor Bar, a Japanese-themed watering hold in the East Village, had its license summarily suspended on Sept. 2. (Twitter)

BY THE VILLAGE SUN | Over the past month, the State Liquor Authority “cut off” several more bars in the East Village, Lower East Side and Chelsea for flouting pandemic safety rules. Because of what were deemed “egregious violations,” the S.L.A. summarily suspended the places’ liquor licenses.

On Aug. 29, the S.L.A. ordered that Karvouna Mezze, a Greek bar and eatery at 241 Bowery, stop serving alcohol.

According to the S.L.A.: “On Aug. 28, investigators with the state’s multiagency task force observed a guitar player and a singer without a facial coverings performing outside the premises. Approximately 20 patrons — most without facial coverings — were drinking, dancing and violating social distancing regulations.”

Next to have its liquor license put on ice was Black Emperor Bar, at 197 Second Ave., on Sept. 2.

“On Aug. 31, investigators with the state’s multiagency task force observed in excess of eight patrons standing, drinking and congregating in front of the licensed premises,” according to the S.L.A. “Inside, investigators observed three patrons sitting and drinking at the bar and one patron standing inside with a drink in his hand, all in flagrant violation of the governor’s executive order in place since March 16, 2020.”

Three days later the booze was cut off at The Skinny Bar Lounge, at 174 Orchard St.

Chelsea was not immune from the task force’s enforcement. On Aug. 15, the authority summarily suspended the license of Tempest Bar, at 407 Eighth Ave., at 31st St.

“On Aug. 14, investigators with the state’s multiagency task force observed approximately 20 patrons standing and drinking directly outside the premises. Inside, investigators documented 20 patrons consuming alcohol while standing at the bar in flagrant violation of the governor’s executive order…restricting indoor dining.”

Businesses found in violation of COVID-19 regulations face fines up to $10,000 per violation, while egregious violations can result in the immediate suspension of a bar or restaurant’s liquor license.

Governor Cuomo announced the latest round of suspensions on Sept. 29.

“Our heightened enforcement efforts are clearly making a difference — leading to more compliance and fewer violations, which has always been the goal,” Cuomo said. “However, some business owners still believe these health and safety measures are optional, and we will not hesitate to hold those who recklessly put their fellow New Yorkers’ health and safety at risk accountable.

“With the start of flu season upon us, colleges and schools opening, and localized coronavirus clusters in the state, we cannot take any chances — and we must continue to enforce the rules that helped us beat back this deadly virus.”