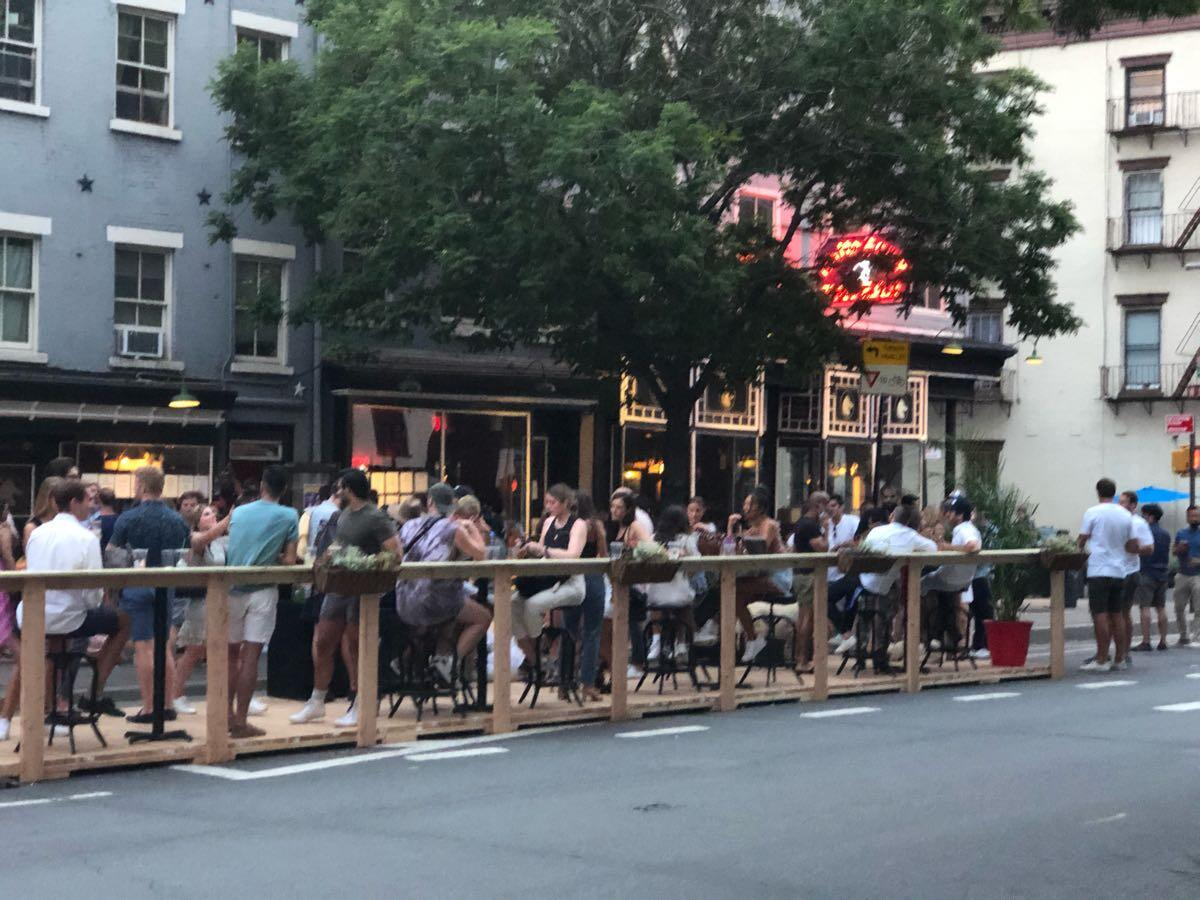 Village District Leader Arthur Schwartz snapped this photo of the White Horse on June 26. As can be seen, some people who are standing are not wearing masks (they are supposed to have masks on until seated) and an illegal wooden platform extends onto the street. (Photo by Arthur Schwartz)

On Wed., July 8, the State Liquor Authority summarily suspended the liquor license of the White Horse Tavern for “recklessly violating protocols” intended to stop the spread of COVID-19.

The Village bar where poet Dylan Thomas famously “raged” has been regularly throwing sidewalk ragers, according to the S.L.A. and local police.

According to a statement by the S.L.A., “The business was found repeatedly violating the Governor’s Executive Order requiring bars and restaurants to adhere to social distancing guidelines to combat the spread of the coronavirus.”

The brazen violations reportedly included setting up an unlicensed bar right on the sidewalk — when all that is allowed right now in New York City during the pandemic is a takeout window for alcohol — plus generally allowing a “street party” atmosphere.

The bar’s owner, Eytan Sugarman, and a manager, Sal, were “directly warned” about the violations, according to the Authority.

On June 26, a Sixth Precinct community affairs officer and another officer met with Sugarman and gave him “written guidance” about the permitted seating arrangements — yet he reportedly responded “he was not responsible for supervising the [conditions] outside his premises.”

However, just a week before, Governor Cuomo had officially put operators on notice that they were now responsible for controlling the area outside their premises.

“He has refused to comply — he has done nothing to comply,” Gary Meyerhoff, the S.L.A. general counsel, said of Sugarman at an emergency hearing on Wednesday that included the White Horse.

Sugarman has owned the 141-year-old watering hole since March 2019.

Notorious landlord Steve Croman was part of a group that bought the building around the same time.

In the end, on July 7, the S.L.A. charged the tavern with a total of 30 violations, “including multiple counts of failure to comply with Governor Cuomo’s Executive Orders concerning COVID-19 restaurant restrictions, operating an unauthorized outdoor bar and failure to supervise the licensed premises.”

On Wednesday evening, the White Horse in a post on Facebook, said, in part, “This new way of doing business was thrust upon us. There is no perfect way to deal with hundreds of people showing up out of the blue. We did our best and continued to try and work towards what was asked of us.”

It wasn’t immediately clear if Sugarman made the post, but it is written in the first person.

The violations against the White Horse, at 567 Hudson St., at W. 11th St., were racked up during a full month of ongoing bad behavior — despite repeated warnings from officials and cops, according to the S.L.A.

On June 14, an undercover S.L.A. investigator purchased alcohol without food at what the S.L.A. described as “the illegal outdoor bar.” The investigator later warned the bar’s owner that for takeout service — which is allowed under Cuomo’s Executive Order 202.3 — alcohol purchases must be accompanied by food, and licensees must also ensure that patrons are not congregating outside of their premises.

Then, on June 20, members of the New York State Task Force — created by Cuomo to police bars during the pandemic — visited the Village hot spot, “observing 67 patrons consuming alcohol in front of the premises.” The S.L.A. charged the owner with three violations of the governor’s executive orders.

It was not until June 22 that New York City started allowing sidewalk dining at tables under the Open Restaurants plan.

According to the statement, the S.L.A. also recently received reports from police that on June 6, 9 and 13, as many as 100 patrons gathered outside the tavern “with an illegal bar setup and music blaring and, each time, the owner or manager was warned about Executive Order violations.”

Responding to complaints, on June 9 at 9:40 p.m., police observed an “outdoor party” going on outside the White Horse, with 50 to 100 people. People were “blocking the sidewalk, there was an unlicensed bar set up on the sidewalk serving alcoholic beverages without food, and a large speaker was playing loud music,” the S.L.A. counsel noted.

Police warned the place’s manager, Sal, but he reportedly “just argued with them that the bar was doing everything it was asked to do.”

In addition, on June 26, when Sixth Precinct officers met with owner Sugarman regarding numerous complaints of noise and social distancing violations, they also observed “an illegal wooden patio platform that extended dangerously out onto the street.”

While seating in the parking lane is allowed under the city’s Open Restaurants plan, this platform, in fact, stretched into a “live left-turn lane.”

“I walked by last night and noticed what can best be described as a ‘holding pen,'” he said. “There is no social distancing, no wearing masks. I thought one of the guidelines for outdoor seating was to have social distancing. This is one block from Sixth Precinct.”

The problems continued on June 27, when police officers responding to a 311 call discovered a crowd of roughly 100 patrons “drinking on the sidewalk and street directly in front of the bar.” Police issued a summons for disorderly premises.

On June 28, the White Horse posted on Facebook, urging patrons to observe social distancing. Maybe everyone was on Twitter and Instagram instead? Actually, technically, people are supposed to be taking their takeout alcohol and going somewhere else with it, anyway.

A week later, on July 4, responding police again found “large crowds directly outside the establishment, without masks or practicing social distancing.” Additionally, the White Horse was cited for violating Department of Transportation rules (under the Open Restaurants program) requiring outdoor activities to cease at 11 p.m.

“Despite numerous warnings, this licensee continued to recklessly violate protocols that have helped to dramatically slow the spread of the coronavirus throughout New York,” S.L.A. Chairperson Vincent Bradley said. “The S.L.A. will not hesitate to take action against licensees who jeopardize lives and threaten the progress our state has made.”

The emergency suspension was ordered by Bradley and Commissioners Lily Fan and Greeley Ford at a special meeting of the S.L.A. full board, conducted by video conference call on Wed., July 8.

During the meeting, the S.L.A. counsel, as he was describing the White Horse’s violations, noted that Sugarman is “an experienced restaurateur.”

“That’s why it was such a surprise that we had to get to this point,” the counsel noted.

The S.L.A.’s decision to summarily suspend a license is not a final determination. The bar owner is entitled to an expedited administrative law hearing before an administrative law judge. An order of summary suspension remains in effect until it is modified by the S.L.A. or a reviewing court.

According to William Crowley, the S.L.A.’s director of public affairs, the Authority has not received a response to the charges yet from Sugarman — such as “not guilty,” “guilty” or “conditional no contest.”

“Once we receive their response — provided it is a ‘not guilty’ response — a hearing will be scheduled,” he explained. “The licensee has to respond to the charges by July 29.”

On what the outcome might be in this case, the S.L.A. board would make a determination on penalties, which could be a civil penalty of up to $10,000  per violation — or cancellation or revocation of the license.

If the owner offers a “conditional no contest” plea, he accepts that a penalty will be imposed.