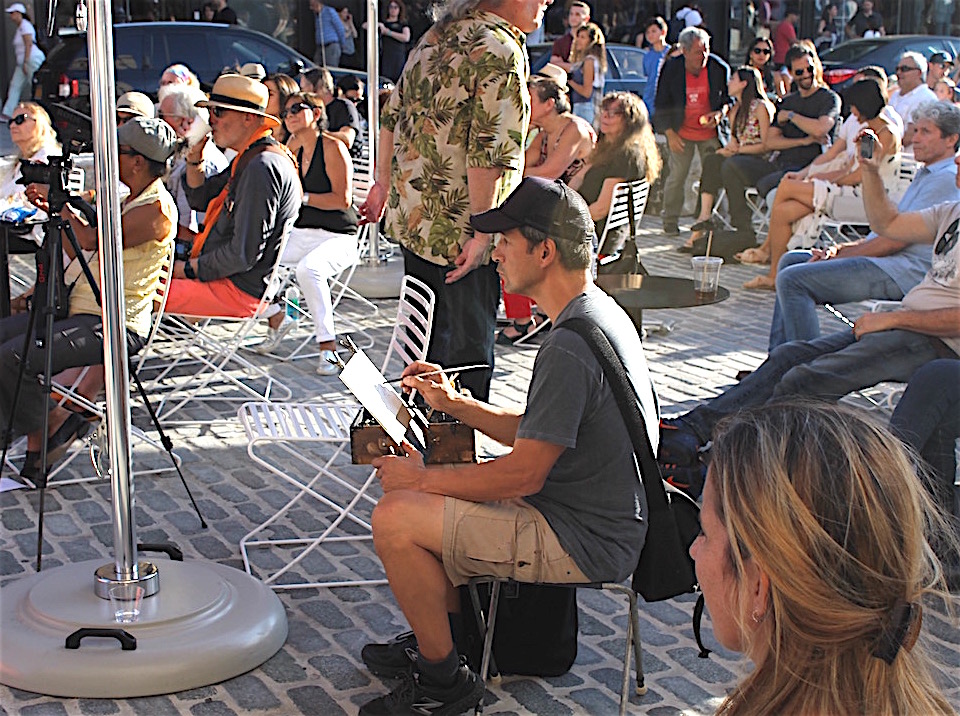 A crowd enjoyed outdoor seating while listening to (and sketching) jazz at Gansevoort Plaza last fall. Under the new restaurant outdoor seating plan, this plaza, which is programmed by the Meatpacking Business Improvement District, could be used for tables and seats for diners. (Photo by The Village Sun)

BY THE VILLAGE SUN | Now it’s on bar owners and restaurateurs to control the space outside their premises — or else.

Following last Friday’s social-distancing fiasco on St. Mark’s Place and ongoing crowding problems in the West Village, among other places, Governor Cuomo announced it’s now up to operators to do enforcement.

Phase two of New York City’s reopening is set to start this coming Monday. It will allow outdoor dining, plus controlled retail shopping, hair salons and barbershops to reopen and offices to reopen at 50 percent capacity with social distancing.

But crowding outside bars — especially in parts of Manhattan — remains a major concern.

Cuomo does not want to see a repeat of last Friday’s St. Mark’s-meets-Bourbon St., where hundreds of revelers packed the block between Avenue A and First Ave., most of them maskless and ignoring social distancing. The viral videos of the crowding had the governor fearing the actual virus could spike, as a result.

On Thursday, Cuomo announced he is signing an executive order that gives bars “responsibility for the sidewalk…the outside area immediately in front of their premises.”

In addition, the governor said he is increasing the state’s enforcement — again by executive order — so that the State Liquor Authority can do an “immediate suspension” of a liquor license if a bar or restaurant is flouting the rules and regulations.

“Business that is violating the rules could have an immediate shutdown order,” Cuomo said.

At the same time, he said, the “S.L.A. doesn’t have enough investigators,” so local government will also have to do its part.

“Compliance matters,” he stressed. “And it’s not just moral and ethical, communal, it’s legal. … So, be aware of the law, follow the law.”

In terms of specifics for outdoor spaces under phase two, all tables with seats must be at least 6 feet from any other table, seat, patron or pedestrian walkway.

Individuals seated at the same table must be members of the same party (but may be from different households), with a maximum of 10 people per table.

Communal tables are only permitted if at least 6 feet can be maintained between parties.

For customers waiting to order, pick up food, pay, be seated or use the restroom, spacing of 6 feet must clearly be indicated.

Meanwhile, in his remarks at his own Thursday press conference, Mayor de Blasio explained where the outdoor seating and tables can be set up and how operators can apply for the feature.

“The idea is to bring the customers back, bring their livelihoods of the people that work there back,” he said, “bring the money in to keep the restaurants going, obviously doing it in a safe way. We all want safety first.”

For restaurants and any bars and cafes that serve food, there are five options. The first is curb-lane seating, meaning the tables and seating would be right in the parking lane outside the restaurant. This option will be available through Labor Day, Sept. 7, on a pilot basis.

The second option is sidewalk seating outside of restaurants. This will be available even to those establishments that did not have a sidewalk cafe permit before.

In addition, there will be backyard and patio seating.

Also, the city will allow restaurant seating on some locations on the open streets that have been created for social distancing during the coronavirus pandemic. This will be allowed on nights and weekends beginning in July.

Finally, some pedestrian plazas that are managed by business improvement districts (BIDs) and civic associations will be allowed to have seating areas for local restaurants. BIDs or local civic associations interested in this option can reach out to the Department of Transportation at plazas@dot.nyc.gov.

The application for outdoor seating is simple and all done online, de Blasio said.

“It will take very few clicks to get done,” the mayor said. “You self-certify. Once you say, ‘Hey, I’m ready to do this, I meet these standards,’ click ‘send,’ you’re in. You’re ready to go for Monday.”

Restaurants do not need to do a separate application for the State Liquor Authority to be allowed to serve alcohol at the outdoor seating.

For any questions about how to apply, the Department of Small Business Services has a hotline for all restaurant owners and managers to get answers, 888-SBS-4NYC.

“We think this will help save at least 5,000 New York City restaurants,” de Blasio said, “help stop them from shutting down and help give them a future, [and] 45,000 workers will have their jobs preserved through this initiative.”

After explaining the concept, the mayor then signed his own executive order to put the Open Restaurants plan into action.

Polly Trottenberg, the D.O.T. commissioner, explained that the Open Restaurants plan built on the idea of open streets, which were created due to COVID-19.

She said a key with the curb-lane seating will be making sure “that it’s done safely.”

“Obviously, we want to be nimble,” she said, “but we have to make sure that pedestrians [can] pass on the sidewalks, that we’re meeting A.D.A. compliances, that our curb-lane seating is safely set up.”

In the past, Community Board 2, which covers Greenwich Village, has opposed pop-up seating in the curb lane; business owners on the board had warned that curb-lane seating would not be safe — though a few examples of this type of pop-up seating have existed in the board.

Trottenberg said details on seating in the open streets and plazas would be rolled out in the coming days.

In terms of enforcement of social distancing and the open-container law — i.e., no drinking in public — outside of bars, there was some discussion at Community Board 2’s full-board meeting on Thursday night.

Councilmember Carlina Rivera, addressing the board, said she had concerns about both enforcement and whom to address complaints to — as well as the lack of a curfew system for the outdoor seating.

Coral Dawson, a C.B. 2 member, said she had heard talk that the enforcement would be done through an “ambassador program” — meaning, apparently, neighborhood volunteers.

“Why would you ask neighbors to enforce it rather than operators?” Dawson asked, incredulously.

“I think that everyone has to be included in this,” the East Village councilmember answered. “Certainly, the proprietor has to be involved; you shouldn’t serve someone without a mask.”

However, Rivera stressed, “Police should be kept away from this.

Rivera noted, “There has been a little bit of a void — a lack of leadership at the top — and we need to hold the mayor responsible, and for your to hold us responsible.”

In general, it’s clearly a time for inventiveness and trying new strategies to cope with our current novel situation.

For example, also speaking at C.B. 2, Manhattan Borough President Gale Brewer suggested that face masks should be designed “with a hole, so you can drink or eat — because they’re not wearing them.”

“The crowds on the street are incredibly disturbing,” she said. “I don’t know why this has become a cultural marker for rebellion among adults — these are not teenagers — among adults. It seems to me, people have been incredibly irresponsible and it’s very disturbing.”

Regarding the so-called “ambassadors” nudging people to don masks and socially distance, state Senator Brad Hoylman said he’d “like to see more of that,” seemingly implying that currently he is not seeing it enough. He agreed with Rivera that police should not be involved in enforcement of social distancing and mask wearing outside bars and restaurants.

In other words, the enforcement options seem pretty limited.

“We’re just going to have to shame our neighbors,” he shrugged.

Some, though, are hoping the current measures result in long-term changes.

For example, on the curb-lane seating, Gersh Kuntzman, the editor of Streetsblog, asked the mayor at his Thursday press conference, “Is this the first step in having you see the curbside as public space for more than free car storage?”

“What is clear,” he said, “is when we come out of this crisis, it needs to be the beginning of a very different city and a city that focuses even more on mass transit. The future of the city of New York is not the automobile, it’s mass transit… . But I think it’s important to also see this as an immediate urgent action that we’re going to take through Labor Day to help these restaurants survive and move forward.”