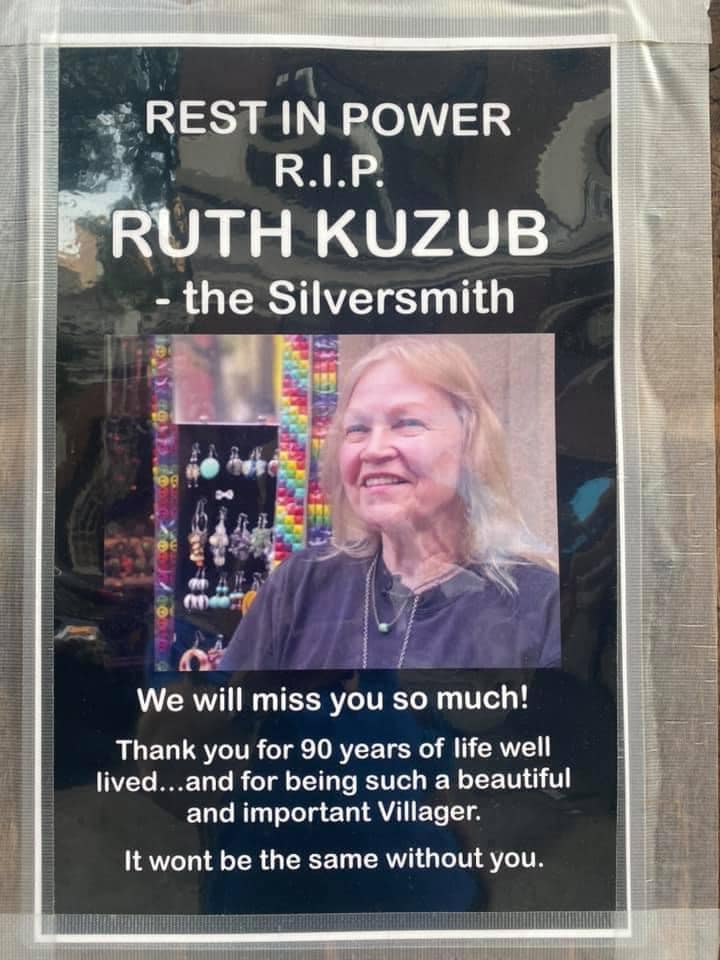 BY LINCOLN ANDERSON | Ruth Kuzub, the longtime owner of the Silversmith on W. Fourth St., died on the first weekend of May. She was 90.

According to Bob Cooley writing in WestView, the cause of death was pneumonia and a long bout of cancer, which Kuzub attributed to exposure to toxins while helping people near Ground Zero on 9/11.

Originally from Milwaukee, Kuzub came to New York City in the 1950s to pursue her dream of performing on Broadway. She danced in clubs like the Copacabana and, according to Broadwayworld.com, played the role of the Living Statue in “Fanny.”

As Kuzub once recounted to this writer, she was dating a prominent club owner back then when she just decided that she preferred women, and left him. She would go on to become a committed L.G.B.T. activist in the Village.

W. Fourth St. used to have numerous jewelry shops. The hole-in-the-wall Silversmith space, at 184¾ W. Fourth St., was originally an open alleyway, out of which a homeless man ran a jewelry business, which was later enclosed. Kuzub started working at a shop at the location, eventually taking it over and going on to run it for 60 years. (A profile of Kuzub in Gothamist has some history on the location.)

Originally, she made her own jewelry but in her later years, as the work became more taxing for her, bought pieces from others, including Native American jewelry makers from out west.

Kuzub originally lived above the Silversmith before settling into a place on Perry St.

She loved to pop over to Marie’s Crisis, the historic Grove St. piano bar, to sing along and have a good time. If you visited her at the shop, she might tell you how much fun they were having that night at Marie’s Crisis.

Kuzub loved riding her bike around the Village. She loved animals. She dashed off concerned hand-written letters to the editor to the local newspaper — such as when birds were once threatened on the Village waterfront — rushing to hand-deliver them by bicycle.

She loved to laugh, heartily, and to smile. She spoke energetically and passionately. She was irrepressible.

Sara Kimbell, a member of the Village Independent Democrats, mainly knew Kuzub from the piano bar.

“We knew Ruth from the neighborhood in the ’80s,” she said. “We had some really wild nights together, including wild times dancing downstairs at the Monster.

“I loved talking with her about the old days — she was a petite blonde dancer in the heyday of the nightclubs, like the Latin Quarter. She had stories to tell of the Mob all over the clubs — of course they ran all the places. She landed on Broadway as a dancer in Harold Rome’s ‘Fanny,’ starring Florence Henderson, Ezio Pinza and the handsome William Tabbert.

“When Encores! did their superior concert revival a few years ago, we all took Ruth to see it. She was a nearly nightly visitor at Marie’s. Just in the last year or two before COVID, she’d wait till almost everyone had left, then sit at the piano and sing a song or two in a delicate soprano. She was quite something.”

In a piece in Wussy several years ago, Evan Brechtel wrote, “Ruth and I met one night at Marie’s Crisis… . She usually comes in the early morning hours once the crowd around the piano starts to fade. The remaining customers always listen, rapt, every time she sings ‘Could I Leave You?’ in her soft soprano.”

Posting on Facebook, Mark Kane wrote, “I still have a silver necklace with a trade bead and silver caps that I bought in 1973. I brought it to her many years later and she told me it was very old and she barely recognized it, but acknowledged that it was hers.”

Bill Shamam wrote, “When my cat went missing Ruth combed the neighborhood until he was found (in the basement of Chase bank). West 4th won’t be the same without her.”