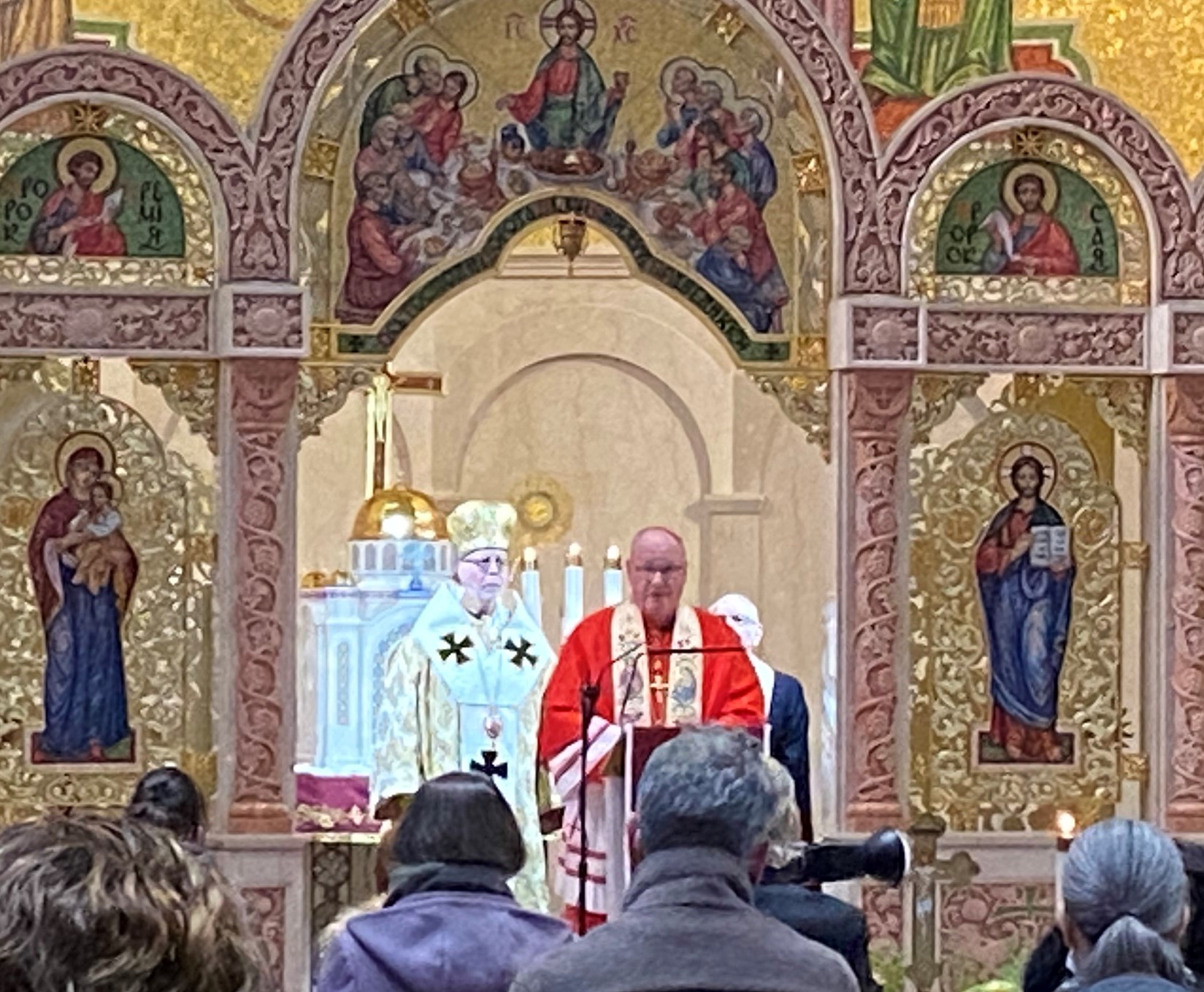 Timothy Cardinal Dolan spoke from the St. George podium, with Ukrainian Catholic Bishop Paul Chomnycky to his right. Chomnycky sang the Divine Liturgy in Ukrainian, although he and Dolan addressed the congregation in English. (Courtesy Archdiocese of New York)

BY KEITH J. KELLY | Timothy Cardinal Dolan visited St. George Urkanian Catholic Church on E. Seventh Street Feb. 27 at an 8 a.m. Mass to offer prayers for the besieged Ukraine as it tries to fight off a Russian invasion.

“Honored to visit St. George Ukrainian Catholic Church this morning to pray for peace for our beloved Ukraine as they face this unjust aggression,” Dolan tweeted shortly after the emotional Mass had ended.

The Mass was the first at St. George since the Russian invasion had begun three days earlier. New York City, with about 150,000 Ukranians, is home to the largest concentration of Ukranians in the United States. The small church at the center of the East Village’s Little Ukraine was nearly filled to capacity.

“When you and I don’t know where to go or what to do, we pray,” the cardinal said in his remarks, according to Catholic New York, the official newspaper of the archdiocese. “To pray with you and for you in solidarity with our cherished Ukraine is an honor for me this morning,” he said.

“The people of Ukraine have been through the crucifixion and are going through it again,” the cardinal told the congregation. “You always inspire us because you believe in the power of the resurrection.”

Dolan told those gathered with him that “your family and friends suffer, and you suffer with them.”

While both churches are branches of the Catholic Church and count Pope Francis as their spiritual head, the St. George Ukrainian Catholic Church is part of the Eparchy of Stamford, Connecticut, led by Bishop Paul Chomnycky.

At the Feb. 27  Mass, Chomnycky sang the Divine Liturgy in Ukrainian. He and Dolan delivered remarks in English to the congregation.

Dolan was joined by Father Sean Connolly, the administrator of the Most Holy Redeemer-Nativity parish on E. Third Street, and by priest secretary Father Stephen Ries.

Bishop Chomnycky called Russian president Vladamir Putin a “deranged individual.” And he also had harsh words for the Russian Orthodox Church, which has not spoken out against the invasion. He called Cardinal Dolan a “good, good friend” who was among the first to call him after the invasion commenced three days earlier, he said.

“Russia has tried to annihilate Ukraine many times,” Dolan said, adding, “Faith and learning and culture and peace and family and form: That’s what Ukraine stands for.”