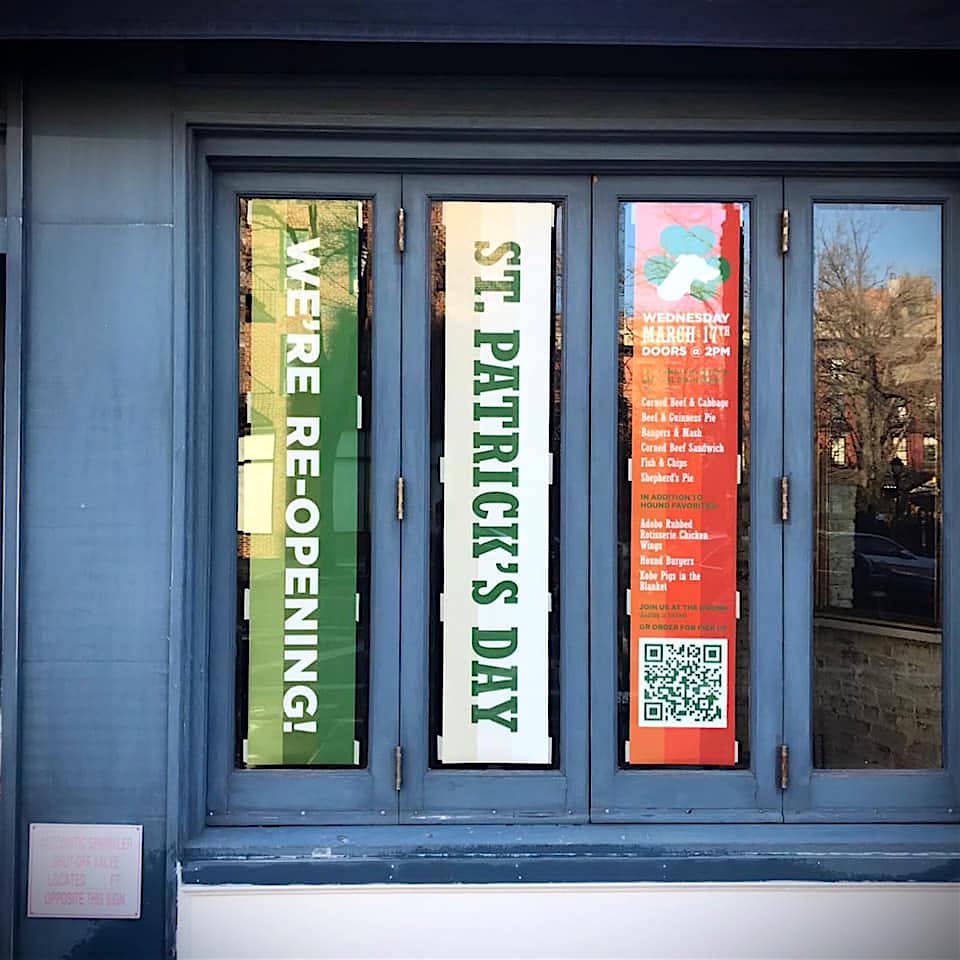 BY KATE WALTER | I was in a good mood as I turned down Hudson Street headed to the post office. The snow was gone and spring was coming. I’d been vaccinated and felt ready for the city to reopen.

But then I walked past Golden Rabbit and felt sad, immediately reminded of all that had been lost during the pandemic. My favorite mom-and-pop store was another COVID casualty. Golden Rabbit was a little stationery and party supply shop, owned by a friendly immigrant couple. I always went there for computer paper, cards, flowers. This loss was deeply felt by the community, especially my neighbors who were parents. They fondly recalled buying party supplies for their kids when they were growing up.

When the owners put a sign in the window announcing a closing sale, I stopped by to pick up a few items and wish them luck. I’d heard they put their daughter through law school from working long hours in the store.

The rent was high. I was amazed they had survived for decades. I assumed they stayed in business by selling Lotto and scratch card tickets and renting mailboxes. The store was small, even smaller than I had realized. When I walked past the space, now gutted, I could not imagine how they had crammed so much inside.

As I continued along Hudson Street, the main drag in my neighborhood, I counted 15 empty storefronts with signs saying, “Retail space for rent.” All within a few short blocks. It was depressing.

Hudson Street has history: Jane Jacobs was a resident, living a few doors from the White Horse Tavern. I read that Diane Arbus took some iconic photos on Hudson Street. That makes sense since she lived nearby in the newly opened Westbeth, where she committed suicide in 1971.

As a New Yorker, I was used to seeing businesses close, but not so many within a year.

How would I manage without Teich? I bought presents for my grandnieces and nephews in this upscale toy store; they had a variety of arts and craft kits and did lovely gift wrapping. Teich saved me on many occasions, like when I was rushing out to a birthday party.

Restaurants were especially hard hit. Philip Marie had been on Hudson Street for many years. Now a sign in the window said, “Thanks for the memories.”

I regret never dining at the Filipino Taqueria when it was still open. I also never made it to Kish Kash, which specialized in couscous and opened in 2018 to rave reviews.

I missed the pizza place where I stopped for a slice on the way back from the Hudson Park Library. The kids from P.S. 3 loved that spot and jammed in there after school. Their high energy made me glad I never taught elementary school. Of course, the bad pizza place on the busy corner, that attracted unsavory characters, had survived.

Small businesses gave the neighborhood character. They made me feel like I wasn’t living in a big city. Kathleen, the owner of the tiny Manhattan Mailboxes on West 12th Street (thankfully still open), always greeted me by name. She was very kind after my mother died when I needed her to notarize a lot of forms.

Right next door to Manhattan Mailboxes is Grove Drugs, where I get prescriptions filled. Before the pandemic the pharmacist conducted wellness programs in the community room of my building and the staff always brought gift bags with samples of body lotions.

Free swag. Rite Aid and CVS never did that.

Even the chains have been hit: Starbucks on the corner of Hudson and West 10th Streets shut down. And the Verizon store where I’d gotten help with my phone.

Bleecker Street, which had become overrun with high-end designer shops, was also lined with empty storefronts. This started even before the lockdown. I can’t say I was upset.

Bleecker Street had completely changed from when I moved here in 1997 and those blocks still had local shops.

The three nearby liquor stores on Hudson Street were all thriving. (During the lockdown I started ordering wine by the case from Sea Grape.) I’m sure I drank more with all this wine stocked in my apartment. I was lonely and there was little else to do.

Restaurants were trying to survive, after setting up stalls with heaters for outdoor dining during the winter. Some had closed but promised to reopen in the warmer weather. My last time sitting at a restaurant table was outside the Bus Stop Cafe on a mild day in November.

The Bus Stop Cafe, an institution on my corner, was still hanging on, though I had not been inside in over a year. I used to eat breakfast there all the time, sitting in a booth by the window. The waitstaff knew my order. Coffee, two eggs over easy, whole wheat toast, butter on the side. That seemed like a long time ago.

I remembered how the Bus Stop Cafe reopened right after Hurricane Sandy, with a limited menu. I think they were using a generator. My neighbors and I waited on line to get inside. We shared tables and ate by candlelight.

Back in 1997, when I was finally offered an apartment in Westbeth Artists Housing, I ran up Bethune Street to the pay phones outside the Bus Stop Cafe to spread the good news.

After 22 years in the East Village I was packing up and moving to the far West Village. I was replacing funky Second Avenue with the more upscale Hudson Street. I was anxious about uprooting. I’d identified strongly with the East Village (where I’d moved from the hippie house in New Jersey when I was 25.) I wondered if I could be happy across town.

But over the past 24 years, the far West Village, with its weird confusing street grid, had become my home. I was comfortable here. I bought fish and cheese and vegetables at the small Greenmarket at Abingdon Square every Saturday. I loved being ten minutes away from Hudson River Park. I couldn’t imagine living anywhere else. Although I was far from rich, I’d played my cards right and landed up in this desirable neighborhood.

But what would my neighborhood look like when this was over? The Partnership for New York predicted that when the pandemic subsides, one-third of the city’s small businesses would never reopen.

I had a fantasy that commercial rents would drop and attract new entrepreneurs. We could reset the clock and reverse the gentrification that catered to tourists and wealthy newcomers. I envisioned more small businesses that served locals.

Or would the storefronts remain empty like that prime real estate on the corner of Sixth Avenue and Eighth Street that used to house Barnes & Noble but had been vacant since 2012? If this happens, how would it impact the city’s economy? I did not want to return to the ’80s.

People predicted that Tribeca was finished after 9/11, but the neighborhood came back stronger than ever. But even Century 21, the iconic discount designer store that bravely emerged, dust covered, after the terrorist attack, could not survive this current disaster. Many of its customers were tourists, who have vanished.

On the upside, as the pandemic continued, residential rents in Manhattan and Brooklyn dropped to the lowest in years, luring and retaining young people who could not have afforded to rent here in the past. My grandnephew loved living in Bushwick.

I sensed a buzz in the air as March continued. This Irish woman was happy that Hudson Hound, a popular Irish American pub, reopened on St. Patrick’s Day, serving pints of Guinness, fish and chips, corned beef and cabbage, bangers and mash. Hudson Hound had closed for the winter, but it was back! I wanted to do a jig.

I stopped by for the craic (fun) and to toast my mother from County Cork. I met a friend and we sat outside drinking beer and eating delicious chips. It was a chilly day but the sidewalk tables were filling up and the food looked great.

A few days earlier, I saw a sign in the window of Henrietta Hudson Bar & Girl, the lesbian bar in business for 30 years. They were reopening in the spring with plans for a stylish outdoor area in the parking lane: exclusive pods for guests and plenty of outdoor sidewalk seating. Maybe I could meet someone and we’d kiss in a pod.

I hoped that years from now, I’d still be here, with Hudson Street thriving.

Walter is a freelance writer and the author of the memoir “Looking for a Kiss: A Chronicle of Downtown Heartbreak and Healing.” Her new book, “Behind the Mask,” a memoir in essays about her life during the pandemic in New York City, will be published by Heliotrope Books.