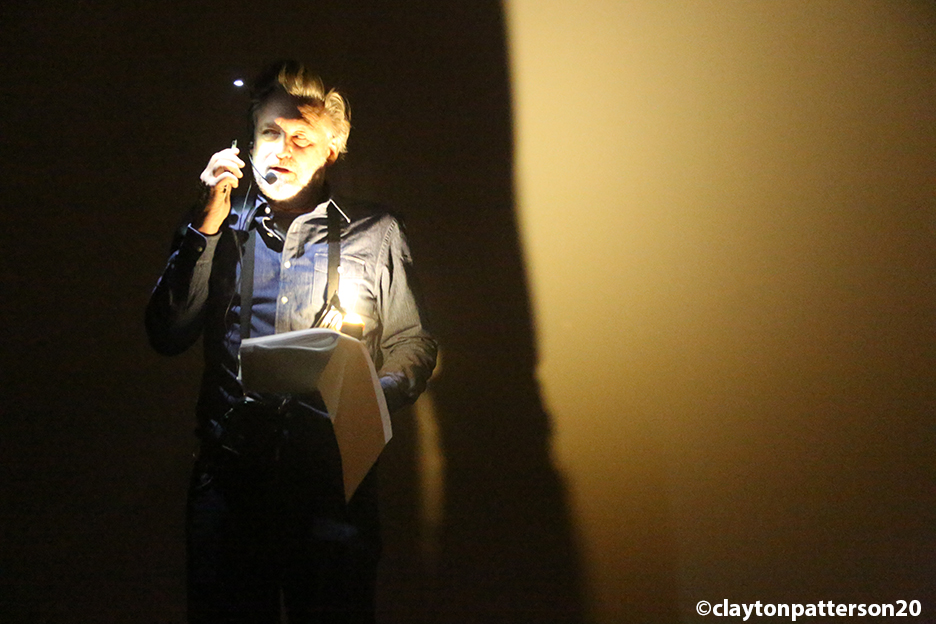 Bill Pullman performing at Jump Into The Light. (Photo by Clayton Patterson)

BY CLAYTON PATTERSON | It has been said if you can educate a child to the age of 7 you have them for life. If this is the case, then it explains my connection to Bill Pullman.

Pullman is Hollywood. By coincidence, I watched his new movie, “The Coldest Game,” a couple of days before I met Pullman. Loved the movie, but really my only connection to Hollywood is 20 seconds of my video in the Todd Philips “Joker” movie. Not enough to be an expert or even interested to talk to him on the subject of his Hollywood career. Nope. What drew me to him is his love for Western artist Charles Marion Russell.

I have an art education. It was at university where I learned about Picasso and modern art. Growing up I never saw a modern art show, forget about Picasso. Admittedly, I have never spent much time looking at original Picasso paintings or books of his art or reproductions, probably less than an hour or two if you add it all up. Different from my wife Elsa; in her prime, she was a printmaking expert, had serious drawing skills, and had trained herself to hand-separate colors for making prints by hand. Called a chromist. When President Reagan lit up the fine-art print world by making them a tax shelter, Elsa converted a series of Picasso paintings into fine-art prints. We lived well for a couple of years.

The majority of Russell’s Native American artworks were centered on the Western United States and Alberta. I am from Alberta. My father had been a cowboy. My dad, along with a Blackfoot Native American, Henry Monroe, drove a covered wagon pulled by a team of horses, leading a herd of horses. They made the long trek from Saskatchewan to Alberta in the late 1940s.

One summer, in southern Alberta, I worked as a farmhand on Monroe’s farm. In those days, calendar art featuring Charles Russell’s work was popular in cowboys’ homes, covering their walls. Our home had some calendar pictures by Russell on the walls, along with some original local artwork and my high school sculpture. The only art book in our house was a Charles Russell coffee-table book. You could say Charles Russell art is bred in my bones.

Fast-forward to Jump Into the Light, a virtual reality/ augmented reality arcade, at 180 Orchard St., where an experimental workshop, involving a computer science team and Pullman, created a performance piece.

Pullman, who is originally from western New York, used to teach at Montana State University before he went into acting. Now he has a ranch and lives part-time in Montana, which is right below Saskatchewan and Alberta. That’s cowboy country, too, so he knows the deal.

This is how they describe the event: “Writer/Director/Actor Bill Pullman is teaming up with Visionbox Theater producer-director Jennifer McCray Rincon and the AR maestros of Jump into the Light Studio for a solo performance experiment that includes a combination of projection mapping, augmented reality technologies and 3D renderings of historical documentation.

“The loss of key components of the West’s natural world decimated an environment that formerly had sustained a vibrant Native American culture.

“Bill seeks through the essence of Charlie Russell to find what are authentic answers for artists witnessing the catastrophic loss of a natural environment. This piece asks who we are, and why an artist’s life and work is necessary as we find our way to go on living meaningfully in this time of accelerating change.

“We believe this production is a groundbreaking intersection of storytelling and immersive technology.”

This was an intimate private event. We had the privilege of witnessing the birth of this first performance in front of a live audience. Yes, there were the few first public bumps and bruises, but that is what test runs are for.

I was held captive by Pullman’s reading. The AR affects worked. I saw the fully visible 3D horse behind him. The place was dark. With the low lights casting shadows on the wall, a haunting spatial environment was created. This was enhanced by Pullman reading the compelling story wearing, strapped to his head, what looked like a miner’s lamp to read the lines.

The most dynamic, immersive fully developed experience was the VR version of Russell’s studio cabin developed by Sky Rolnik. Put on the goggles and you were there, right there in his studio. To top it off, the googles feature a speaker tour of the cabin, which comes with a flashlight that shows up as you point the light at the subject described.

I was asked to give a critique of the piece. But it was too soon to say. I am not a theater critic. It was the first live performance. It will get tighter.

I would compare it to a rodeo cowboy at the first bull-riding competition of the season. Bill struts across the infield, the fringes of his chaps rustling. He springs up the steel fence penning in the raging bull. Swings his leg over the bull’s back. Legs hugging the bull. With his right hand protected by his rosin-rubbed deer skin glove, down by his crotch, his hand, palm-side up, squeezed under the rope that he will hold onto, spurs by the knot, left arm free and used for balance.

The chute swings open, and he lasts the 8 seconds riding the tornado. Wins the purse of the day, enough to get the trophy belt buckle, but needs to go the season to become the world champion at the Calgary Stampede. I think this cowboy has the potential to become the champ. Ride ’em cowboy.