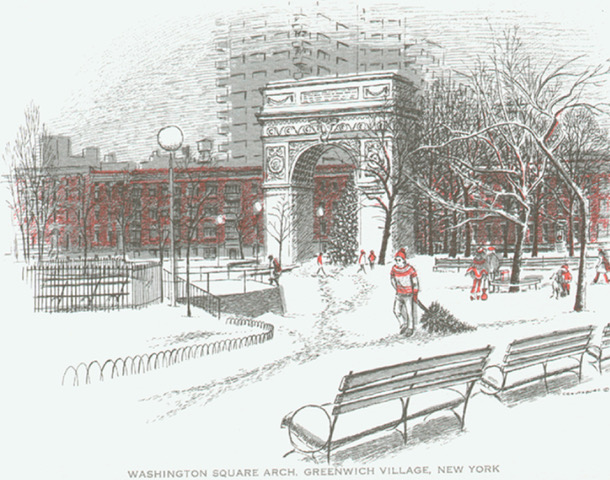 BY REED IDE | The 1970s seem so far away, seen from the vantage point of 2020. Still, I have memories, many Christmas memories. My first New York tree: oversized, jammed into the corner of a smaller-than-small living room. The tree I had on W. 12th St.: a larger living room, but dishes were washed in the bathtub. Yet, the fireplace worked!

When the holidays were finished. I simply opened the window and threw my tree to the sidewalk two stories below, in front of the Federal townhouse that housed my unique digs. The Village was a different place in those days.

So much has changed around us. Consider Christmas cards. For many people, those, also, are a distant memory. E-mail and texting, DMs and IMs have replaced the cards we honored so assiduously. Back then (and even before the ’70s), it just wasn’t a Greenwich Village Christmas if you weren’t sending Washington Arch cards. Each year, starting in 1959, the pen-and-ink drawings of Village scenes found their way into thousands of homes during the holiday season.

The story of those bygone Christmas cards is the story of Carol Creutzburg, a fashion artist who moved to the Village in 1955. I spoke with Carol in her cluttered Perry St. apartment during a week before Christmas in the early 1970s. In the year we spoke, more than 80,000 of her cards were sold in stores throughout New York, and even beyond. In 15 years, her Washington Arch cards had become a real business, conducted simultaneously with the contract fashion drawing that Carol continued to find time to do.

All her cards were of familiar scenes mostly in the Village, but also, in later years, throughout the city. Residents of specific streets in the Village would send cards depicting their street. The Washington Square Arch was also popular. In fact, Carol made at least seven different “Arch Cards” over the years.

For her, Christmas began in March. Scenes were first photographed. Drawings were completed in April, and prospective customers saw them in May or June. Those cards that received enough orders were then printed during the summer. Often, Carol would do some door-knocking to get just the right perspective on a scene.

“I have rung on strange doorbells in order to get a card done,” she said. And people let her in, another sign of our changing world.

In 1980, after 25 years of residing in Greenwich Village, this 59-year-old lady who never wore pants (“much too unladylike,” she would say) sold her flourishing business, and returned home to Wayne, Pennsylvania. There, she continued drawing, but was more strongly drawn to local history. She joined the neighboring Radnor Historical Society, wrote articles on local history for the Suburban & Wayne Times, and rode her bicycle wherever she went. She never owned car. People always knew her by the red warning flag waving from the back of her bike.

Carol Creutzburg died on May 16, 2012, at the age of 91. But her cards live on. You will often find them for sale individually online. They pop up on Etsy and eBay, and proliferate in online searches of her art. They hark back to a romantic view of a past, less complicated, Village life. And they enliven the memories of those of us who, in that time, looked with anticipation to a day in November or December when we would discover the new cards we would be sending forth into the world for Christmas.