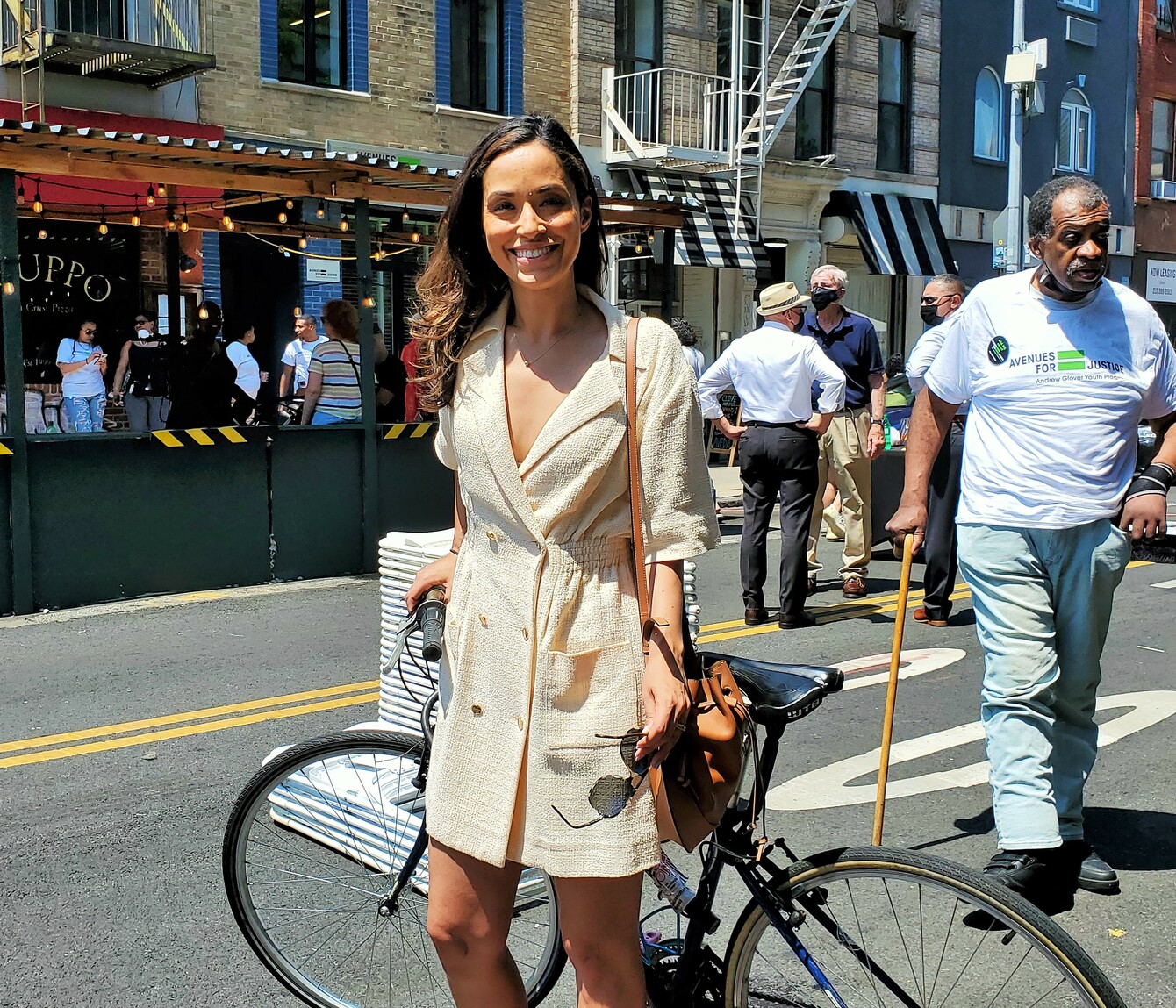 Although she hasn't officially announced her candidacy, Councilmember Carlina Rivera is apparently running for Congressional District 10. She has reportedly filed the necessary paperwork to enter the race. (Photo by The Village Sun)

Reading the tweet leaves: Hoylman drops out of District 10 race; Niou, Rivera and Jones are running

BY LINCOLN ANDERSON | You really need a scorecard to keep up with this one.

On Saturday morning, Brad Hoylman dropped out of the running for the August Democratic primary for the new 10th Congressional District. In a tweet around 10 a.m., he announced that after giving it much thought, he’s decided to run for reelection to the state Senate.

After a very long week (and a very long night!) I’ve decided to run for re-election to NYS Senate District 47.

There’s a lot more work to be done in Albany. Good luck to all in NY10! pic.twitter.com/ks2QZWjFra

Meanwhile, just an hour after Hoylman backed out, Assemblymember Yuh-Line Niou announced, at a prescheduled rally in Chinatown’s Columbus Park, that she’s running for the new District 10, which includes all of Manhattan south of 14th Street.

“In this fight, it is not enough to elect more Democrats if they are not willing to cause good trouble,” Niou declared. “I am running to hold accountable the people who rigged our economy, trashed our climate, profiteered during a pandemic, and cheered on the rise of white supremacist violence, like what we saw in Buffalo. We will not do that with the same go-along, get-along approach advocated by the same go-along, get-along politicians. Our loved ones, our neighbors and our families deserve better than that. You deserve better than that.”

Niou, the first Asian American to represent Chinatown and the 65th Assembly District in the state Legislature, was elected in 2016 to fill fallen Assembly Speaker Sheldon Silver’s seat.

About an hour later in the East Village, Councilmember Carlina Rivera was at a street co-naming ceremony for Avenues for Justice, an alternatives-to-incarceration program, at Sixth Street and Avenue B. The Village Sun asked her if she plans to toss her hat into the ring for the 10th District, and she said she was still giving it thought.

In a tweet the day before, Rivera said she was awaiting “final data” — perhaps referring to polling or other research on the new District 10 or waiting to see who else is running — before deciding whether to take the plunge.

As I speak with family, local leaders, and await final data, I’m excited for NY-10’s possibilities.

I’ve fought unapologetically for abortion access, good jobs, and a fairer, more resilient city and am seriously considering bringing those ideals and my experience to Washington.

However, later Saturday afternoon the New York Post tweeted “ICYMI” (in case you missed it) that Rivera had filed paperwork to run for District 10.

It’s not required for congressional candidates to live in the district for which they are running or even after they are elected. As a result, Mondaire Jones, who currently represents the 17th Congressional District, covering Westchester and part of the Hudson Valley, has decided to run for the 10th District. The new lines for his District 17 had set up a battle between Jones and either of two other Democratic congressmembers, Sean Patrick Maloney or Jamal Bowman. Jones instead has opted to run for the city district.

I have decided to run for another term in Congress in #NY10. This is the birthplace of the LGBTQ+ rights movement. Since long before the Stonewall Uprising, queer people of color have sought refuge within its borders.

Village District Leader Arthur Schwartz, who is a former campaign counsel for Jones, was excited at his entry into the race, even claiming that it was what made Hoylman, another openly gay politician, reconsider.

“I know Mondaire well — he has been my client,” Schwartz said, “and we would be blessed to have him as our congressman. Brad Hoylman immediately stepped back.

“He is a sitting congressman with a very good record,” Schwartz said of Jones. “Close to The Squad. And he has fundraised $3 million.”

Congressmember Nydia Velazquez, whose name was also in the mix for the 10th District, had the strong backing of former Council Speaker Melissa Mark-Viverito, who early Saturday morning went as far as to encourage other contenders to “stand down” to clear the field for her.

Final lines have @NydiaVelazquez in NY10. She’s been representing large parts of that district for long time. 1st Puerto Rican woman elected to Congress & a kick ass Rep. IF she were to decide to run in NY10, everyone should stand down. She is our voice. Don’t. Mess. With. Nydia.

However, around 1 p.m., Mark-Viverito tweeted that Velazquez had instead decided to run for reelection in Brooklyn’s 7th District. Under the new redistricting, Velazquez lost part of the Lower East Side that used be in her district.

Councilmember Gale Brewer, who represents the Upper West Side, was also at the Avenues for Justice street co-naming ceremony on Avenue B. Later on she was watching the Dance Parade festival on the main stage in Tompkins Square Park. She must not have been obssessively glued to Twitter like the rest of the political class on this beautiful Saturday, because her info wasn’t quite up to date. She apparently didn’t know Hoylman had just dropped out.

“For me that’s a hard one — the Hoylman versus Scott,” she said of deciding whom to endorse in the District 10 primary.

Scott Stringer, the former city comptroller, hasn’t posted anything about the primary on Twitter. His last post was Friday, a retweet of his wife’s tweet about their son Miles’s ninth birthday. Stringer’s name is also being floated for the 10th District.

Brewer said she had also heard that David Yassky, a former Brooklyn city councilmember, was interested in running. So far, though, Yassky’s only Twitter commentary on the new District 10 has been to retweet a City and State article that claimed de Blasio lacks support among the Orthodox Jewish voters in Borough Park, despite being backed by their leadership. Yassky also posted a humorous video protesting that the redistricting had put Brooklyn’s two best bakeries in different districts.

Assemblymember Harvey Epstein was greeting constituents at the Avenues for Justice event. Asked if he was running for District 10, he quipped, “Who’s not running? … I’m not running.”