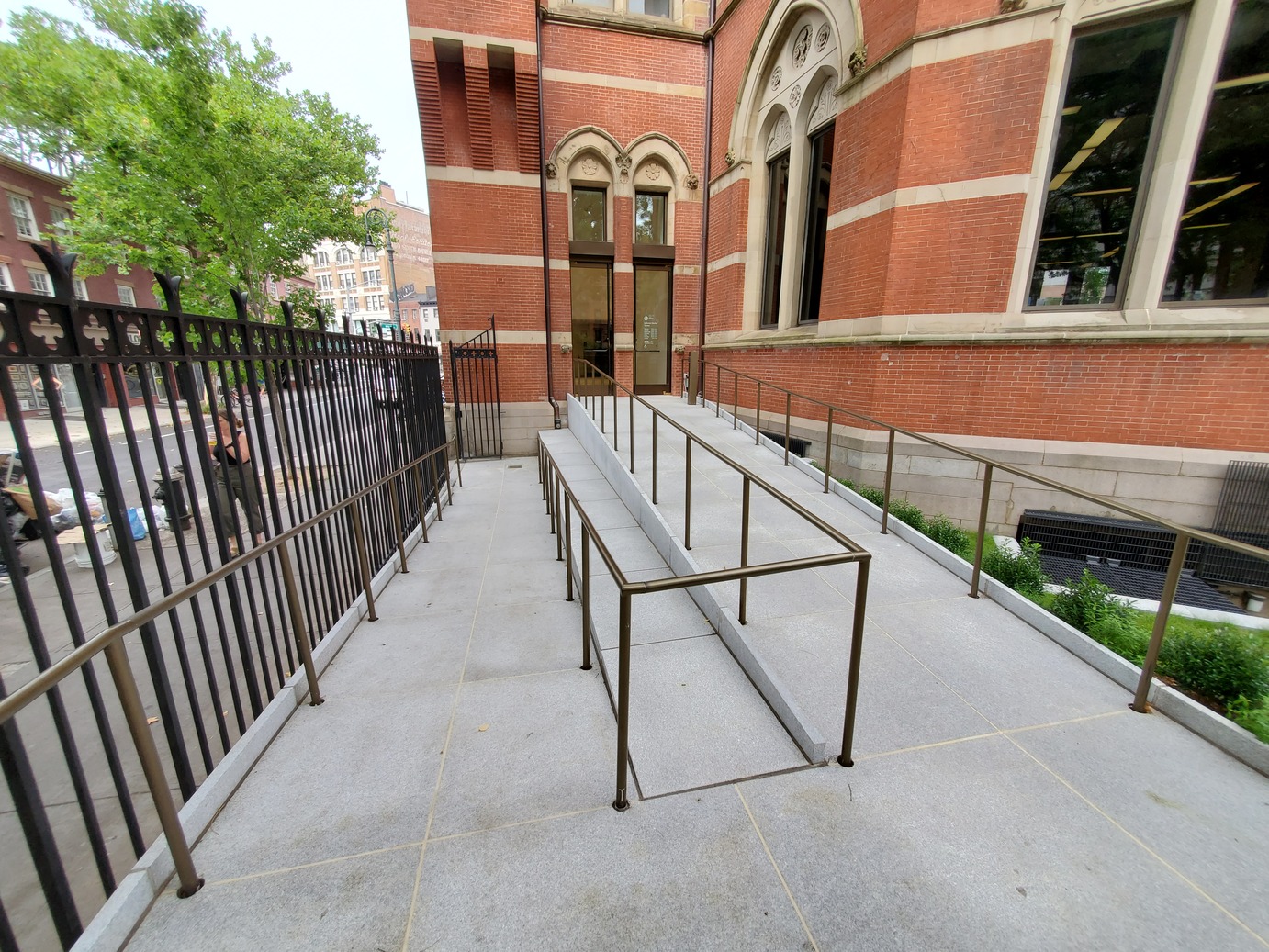 The new A.D.A. ramp at the Jefferson Market Public Library. (Photo by The Village Sun)

BY THE VILLAGE SUN | The Jefferson Market Public Library is back open and looking better than ever after a $10 million, several-years-long renovation.

The library, at Sixth Avenue and W. 10th Street, reopened its doors two weeks ago. A ribbon-cutting with officials was held last week.

The library has already started holding events, including a recent reading by Ada Calhoun from her new book, “Also A Poet,” on July 17. In her talk, Calhoun noted how, as a young girl growing up on Astor Place, the Greenwich Village library helped cultivate her love of reading.

The renovation included adding a wheelchair-accessbile ramp to the building’s rear entrance, an upgraded elevator, accessbile restrooms and a new lobby area that can double as an event space, plus improved connectivity for tech. The building is now fully handicap accessible.

Originally a courthouse, the building has served the Greenwich Village community as the Jefferson Market Library for more than 40 years. A New York City landmark, it was designed by architects Frederick Clark Withers and Calvert Vaux (who also assisted in the design of Central Park) in a Victorian Gothic style.

Originally, the building contained a civil court on the second floor, now the library’s adult reading room, and a police court, now the first-floor children’s room. The brick-arched basement, now the library’s reference room, was used as a holding area for prisoners on their way to jail or trial. Scattered about the building were offices and chambers, and looming 100 feet aboveground was the firewatcher’s tower. The tower, still intact, commands an uninterrupted view of Greenwich Village, and still houses the bell that would summon volunteer firemen.

The actress Mae West notably was put on trial in the courthouse in 1927 on obscenity charges after her Broadway play “Sex” was raided by police and she was charged with lewdness and corrupting of youth. Refusing to close the show to have the charges dropped, she instead did 10 days in jail on Welfare Island, today known as Roosevelt Island — which proved to be great publicity for both her and the play.

In the 1960s, Greenwich Villagers rallied to save the former courthouse from demolition and to convert it into a city public library. The adjacent prison, then known as the Women’s House of Detention, was demolished and eventually replaced by today’s Jefferson Market Garden.