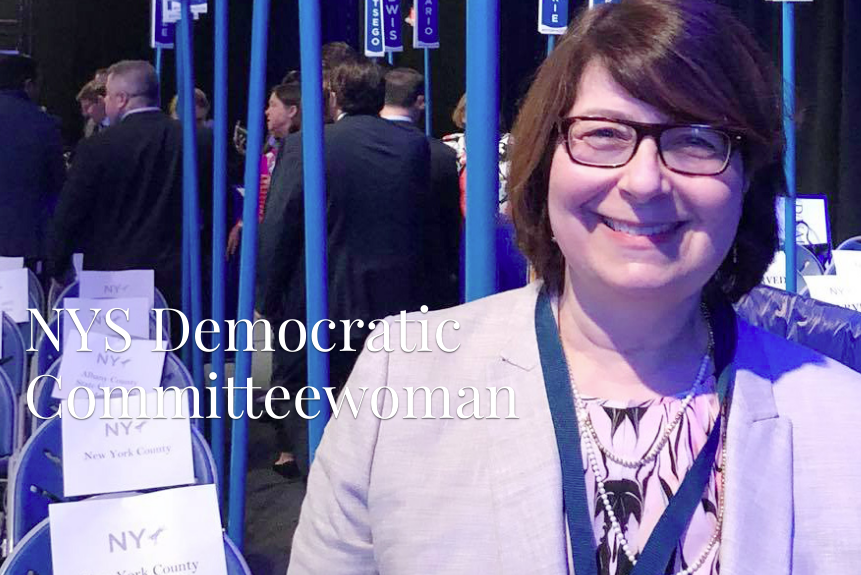 BY RACHEL LAVINE | I am Rachel Lavine, your New York State Democratic Committeewoman for the 66th Assembly District.

You might be asking yourself, so what exactly does a New York Democratic State Committeemember do? Our first job is policy: We enact resolutions that serve as statewide party platform, legislative advocacy and political reform. Our second job is to cast votes at the State Convention on behalf of Democratic candidates running for statewide office: our U.S. senators, governor, lieutenant governor, attorney general and state comptroller.

The votes of State Committeemembers are weighted depending on how many Democratic votes are cast in their assembly district (“A.D.”). As a result, since the 66th A.D. has the second-highest number of Democratic votes cast in all of New York, your State Committeemembers have the politically powerful and politically hopeful calling on us every few years.

This means that, as your State Committeemember, I get to share with those powerful candidates the concerns of progressive voters — and believe me, I do. I’ve advocated directly with Governor Cuomo, for example, in support of a moratorium on hydrofracking in New York, passing substantive sexual-harassment legislation, extending the statute of limitations for sexual assault and removing it for child-abuse victims, and requiring that all teachers getting certified in New York take mandatory training on how to identify and teach dyslexic students — all important changes that were subsequently enacted into law.

As part of my work on the State Committee, I am the co-founder and chairperson of the Progressive Caucus of the New York State Democratic Party, which has been a bellwether for progressive change and a key political force since our inception in 2013. At our founding meeting, the Progressive Caucus became the first Party entity to call for the removal of then-powerful but predatory Vito Lopez from the Democratic Party because of his sexual harassment of female staffers. One of our most important political victories was putting the state Party officially on record disavowing any Democratic candidate who was also a member of the so-called “Independent Democratic Caucus” (IDC), a critical political tactic that finally helped win the current progressive majority in the state Senate.

Most recently, as chairperson of the Progressive Caucus, I successfully worked with our colleagues in labor and the Rural Caucus to pass a resolution supporting the Farmworker Fair Labor Practices Act. This legislation would undo egregiously unfair wage practices for farmworkers based on Jim Crow laws, and allow tens of thousands of predominantly Hispanic New Yorkers overtime pay after 40 hours. I’ve also successfully led to passage of resolutions on ethics reform, protection of undocumented immigrants, and support for rent control and stabilization.

As a lifelong L.G.B.T.Q.I. advocate, I’ve led the fight in the Democratic State Committee for full marriage equality, which resulted in New York becoming the first state in the nation to legislatively guarantee marriage rights to same-sex couples. I’ve passed resolutions demanding that state budget funds be redirected from building prisons to social services, to overturn the draconian Rockefeller drug laws and mandatory drug sentencing, and to support the Gender Non-Discrimination Act (GENDA) to ensure the civil rights of transgender and nongender-conforming individuals. On a Party level, the Progressive Caucus recently won language changes in the State Committee Bylaws ensuring inclusion of non-binary and transgender individuals.

Those are just some of the many policy and legislative changes that I have successfully advocated for.

Right now, one of the most pressing concerns we face locally and nationally is racial justice and police brutality. We are a country of vast inequalities and we will need to make serious change to remedy the social, economic and justice inequities that ravage our country. As a longtime activist, I have fought against police brutality for several decades, having often encountered it firsthand. The recent state bills overturning statute 50A, thereby allowing the disclosure of a police officer’s record, and banning police chokeholds, are an important start to ensuring police accountability. But we need federal legislation that will overturn qualified immunity, the law that shields police officers from accountability for violent and corrupt acts done in the course of “their job.” And that is only the beginning.

On a personal level, I graduated from New York University School of Law and was first a litigator, and then a public-interest attorney at Safe Horizon, working on behalf of survivors of sexual assault, child abuse and domestic violence. I currently serve on the board of Eleanor’s Legacy, an organization dedicated to electing pro-choice Democratic women, and Everyone Reading, whose mission is to remediate dyslexia in children: Sixty percent of the people now in prison are dyslexic.

I am married to Roberta “Robbie” Kaplan, a civil-rights attorney whose groundbreaking victory at the U.S. Supreme Court in United States v. Windsor overturned the Defense of Marriage Act and won marriage equality federally, and whose current advocacy work includes co-founding the Time’s Up Legal Defense Fund, suing the Charlottesville Nazis, and suing Donald Trump both in his business and personal capacities. Most importantly, we are parents of an amazing child.

I ask that you vote for me, Rachel Lavine, for Democratic State Committee. You can learn more about me at rachellavine.com and reach out to me there.