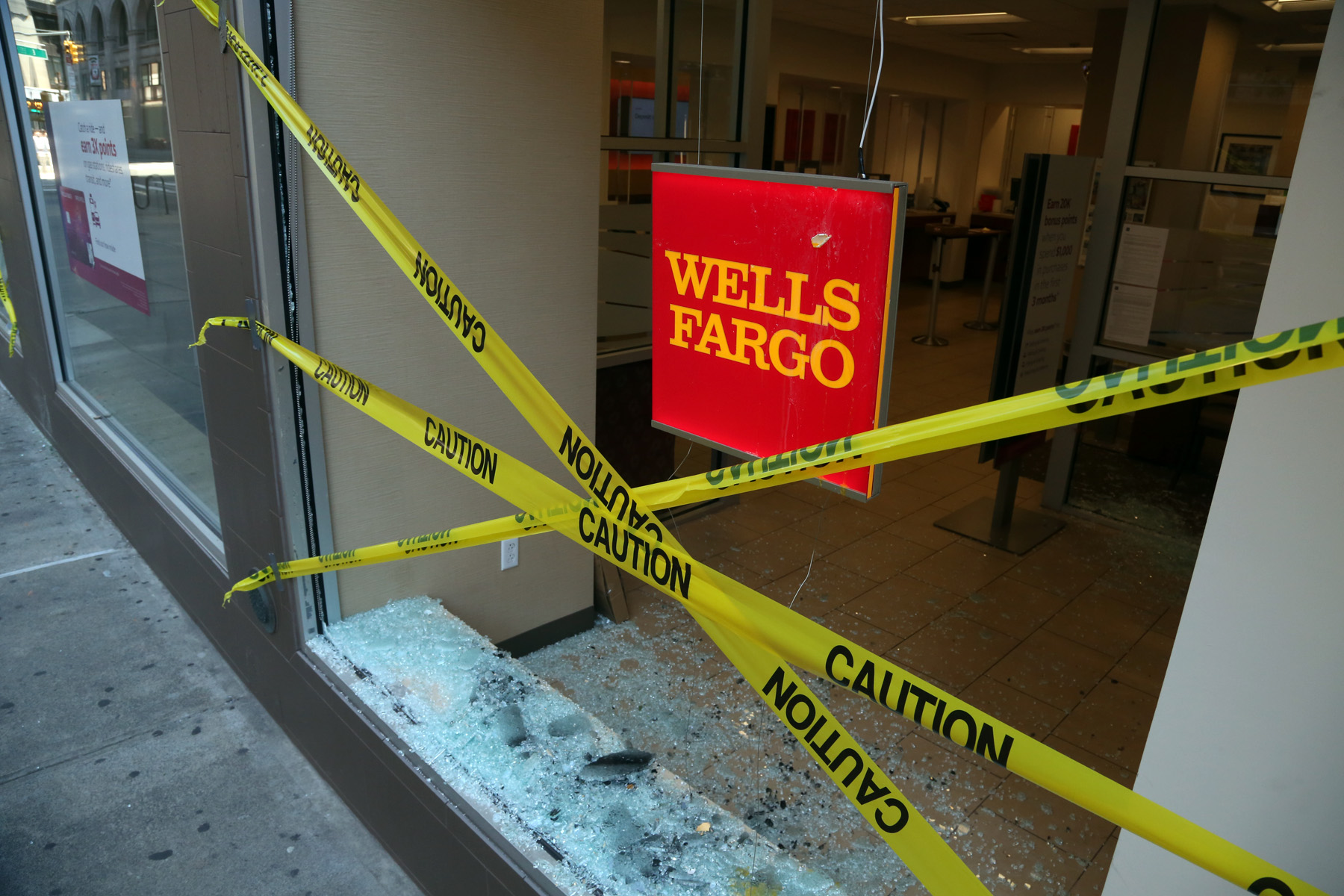 A broken window at the Well Fargo bank branch on Broadway near Ninth St. (Photo by © Jefferson Siegel)

BY THE VILLAGE SUN | After the smoke cleared, literally, and the sun came up, Union Square, Soho and other parts of Downtown were scenes of devastation Sunday morning following another night of protests over the killing of George Floyd by a Minneapolis policeman.

Demonstrations started out peacefully Saturday in Manhattan, along 125th St. and at Union Square. But by the evening, things had devolved into bedlam and hundreds of arrests had been made citywide.

Mayor de Blasio has said the majority of the protests have been peaceful, though have been marred by a small element of individuals fomenting violence.

A dozen police vans and vehicles were torched in and around Union Square, and the windows of banks and stores along 14th St. were smashed.

Later in the night, in Soho, young protesters shifted their sights to high-end sneakers and brand-name fashion, as they went on a wild looting spree, ransacking the Adidas and North Face stores and other outlets.

She saw windows smashed at the Chase bank at 10th St.; two bars, including The 13th Step, and a Verizon store between Ninth and 10th Sts.; the HSBC bank branch at Ninth St.; the French pastry shop at Seventh St.; and the Apple Bank between Sixth and Seventh Sts.

The owner of a 24-hour bodega at Ninth St. and Second Ave. told her the window-breaking occurred between 10 p.m. and 1 a.m.

“I was sitting in Washington Square Park around 3:30 this afternoon when a march of around 1,000 mostly young people came down Fifth Ave. and went through the park,” she said on Sunday. “There were a lot of police following them, but they seemed very relaxed. The arch in the park had ‘FTP’ [‘F– the police’] sprayed on it, and it was being removed while I was there.”

Park workers were moving quickly to prevent the spray paint from sinking into the monument’s porous marble.

“They were putting on some amber-colored fluid in order to remove it immediately,” Wolpe said.

Waging destruction indiscriminately, the protesters also reportedly did not spare local favorite, the B&H Dairy kosher restaurant, on Second Ave. near St. Mark’s Place, breaking its window, too. Like other small businesses on that block, B&H struggled to survive after a massive gas explosion in 2015 destroyed three buildings just to its south.

So far, Mayor de Blasio has refused to order a curfew — though he has admitted he expects the protests may continue to flare for several more nights.

The mayor, however, says New York City is unlike those other metropolises.

“Every place is different,” he said at a press conference Sunday morning. “This is a place with a strong tradition of peaceful protest, and a strong tradition of the N.Y.P.D. being able to manage peaceful protest…and New York City actually has had a very different tradition [than other cities]. We find a way in this most complex of places to work things out, even if it’s imperfectly. Last night was not perfect at all.”