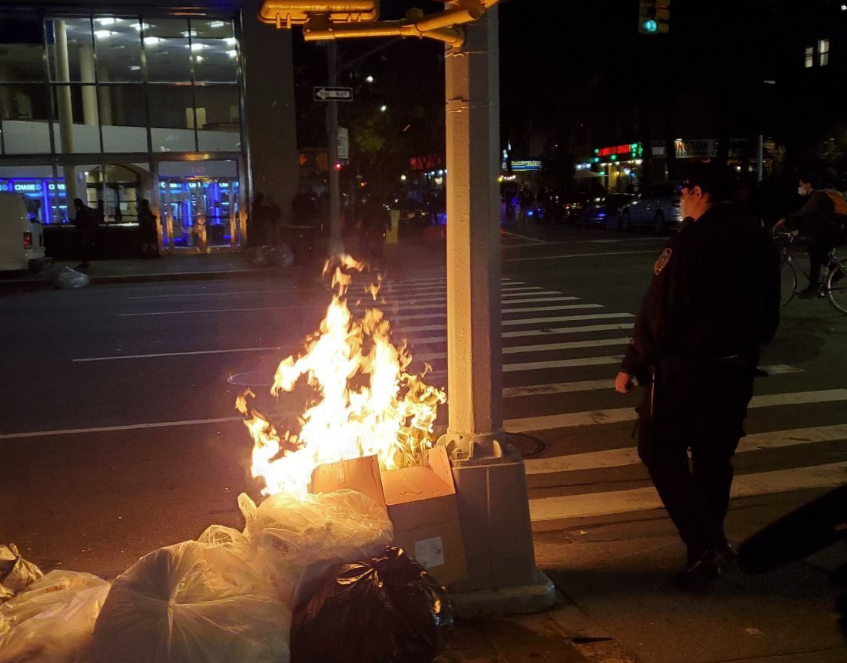 BY THE VILLAGE SUN | After last night’s peaceful “Protect the Results” march that saw thousands stride down Fifth Ave. to Washington Square Park, things took a darker turn as another faction continued to march around the Village.

According to police, the protesters set trash fires at W. Fourth St. and Sixth Ave. and other spots. The New York Post reported that two people burned a Joe Biden campaign sign to cheers, and that others cursed outdoor diners at Jeffrey’s Grocery seafood restaurant, on Waverly Place, shouting at them, “F— your dinner!”

We support everyone’s right to self-expression, but setting fires puts others at risk and will not be tolerated. We are working to de-escalate the situation near Morton Street in the West Village to prevent further damage from occurring. pic.twitter.com/4nTK6UUBzC

The protesters were decrying police violence and calling for racial justice, similar to the marches during the George Floyd protests this summer.

Eventually, they were confronted by cops at Leroy St. and Seventh Ave. South., and then again at Eighth St. and Fifth Ave.

In a video tweet that went viral, one protester — a 24-year-old woman from Pennsylvania — can be seen repeatedly yelling in an officer’s face, “F— you, fascist!” After he pulled up his face mask, she promptly spat in his face, at which point he arrested her. The woman later said she was objecting to police using their bicycles to hit people.

Last night, these individuals were arrested at protests in Manhattan for various crimes, including assaulting police officers & weapons possession.

If you have any info related to these individuals, or others regarding violence at protests, please call @NYPDTips at 800-577-TIPS. pic.twitter.com/w0ytPs1Opr

According to reports, in the end, police arrested 25 people — most of whom faced disorderly conduct charges — plus gave out summonses to another 32.

The Post said that cops also recovered a Taser, two knives and M80s from among the protesters.

These weapons, confiscated at protests tonight, put others at risk. Bringing weapons to peaceful protests cannot and will not be tolerated. We are currently working to de-escalate the situation. Anyone caught with a weapon will be arrested. pic.twitter.com/GiCDv74ncT

However, protesters criticized the police, among other things, for the scene at Eighth St. and Fifth Ave., saying the police trapped them “like sardines” before moving in and aggressively making arrests.

After the cops began handcuffing people, the protesters started chanting, “Let us disperse!”

Protestors, packed like sardines, are beaten and arrested while onlooking officers laugh. pic.twitter.com/TCwVzFiRed

Police misconduct and racial justice aren’t the only issues people are demonstrating about right now, though. Elsewhere across the country, tensions are rising between groups over vote counts in battleground states.