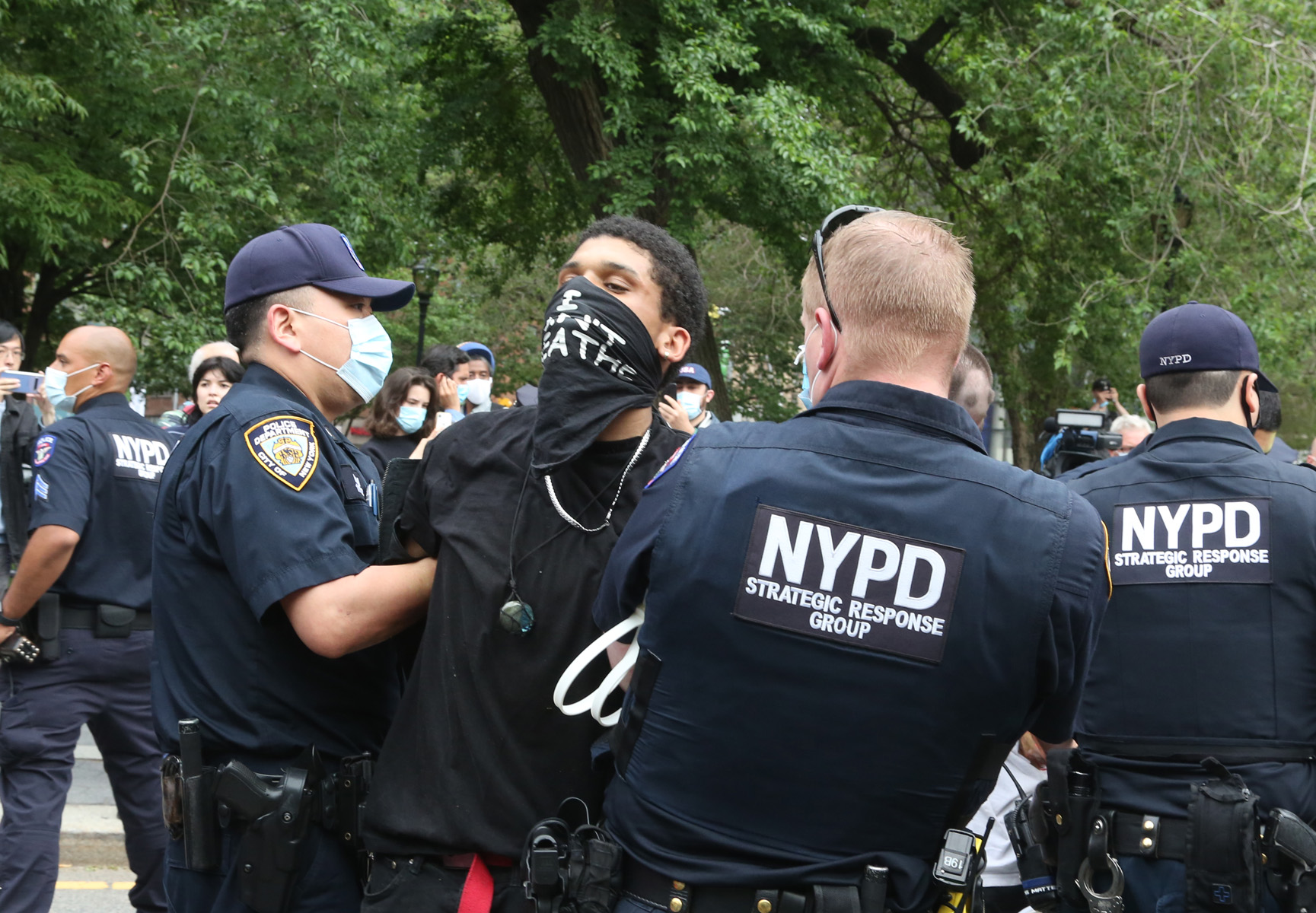 A demonstrator is arrested at Union Square on Thursday. (Photo by © Jefferson Siegel)

BY JEFFERSON SIEGEL | Updated May 29, 1:00 a.m.: Spurred by the chilling caught-on-video death of a black Minneapolis man while being arrested by police, protesters took to Downtown’s streets late Thursday afternoon to voice their grief and fury.

There were clashes with police in and around Union Square and in Lower Manhattan, leading to dozens of arrests.

As of early Friday morning, a police spokesperson said that there had been more than 40 arrests. The New York Post reported there had been at least 70.

George Floyd, 46, was killed on May 25 after Officer Derek Chauvin, 44, who is white, knelt on his neck for seven minutes as Floyd desperately pleaded for him to stop.

Two other officers reportedly also helped hold Floyd down on the street while a fourth kept bystanders at bay on the sidewalk.

“I can’t breathe,” Floyd gasped to Chauvin, “I’m about to die…please don’t kill me.”

Floyd’s saying he couldn’t breathe was eerily reminiscent of Eric Garner’s death while being arrested with a chokehold by police on Staten Island six years ago.

Stunned Minneapolis bystanders recorded the sickening scene on their cell-phone cameras while telling the cops that the prostrate Floyd was not resisting and to just put him in the police car already.

The officers reportedly were called because Floyd tried to pass a fake $20 bill at a nearby deli.

The four officers were fired the next day. The F.B.I. and U.S. Department of Justice are investigating Floyd’s death. Both President Trump and Joe Biden have said that Floyd and his family deserve justice.

Chanting, “No justice! No peace!” “F— the police!” and more invective, they faced off with lines of bicycle officers, backed up by groups of officers filling the street, who occasionally pushed back against the swelling, cursing crowd.

At one point, several plastic bottles were thrown at the police. There were reports that one person was collared for having a knife and another was arrested for allegedly throwing a garbage can at a cop.

Social distancing was all but impossible in the tightly packed protest, although most on both sides wore face masks.

Things eventually got heated at police and protesters clashed at 17th St. and Union Square East. A video posted on Twitter shows a group of officers trying to arrest a screaming woman while another officer breaks his club while swinging it at a man’s leg. A police audio recording can be heard telling people that if they get onto the sidewalk, they won’t face any charges.

Patrick Gaspard, president of the Open Society Foundations, condemned the police’s actions in the video:

This was a peaceful protest against police abuse in Union Square. How on earth did it devolve to this? Why were police making arrests at this demo? There have to be answers. We can’t have our NY public officials tweeting solidarity with George Floyd while NYPD lack accountability https://t.co/DmiNGnVLj4

There were 12 arrests before the crowd started marching west along 14th St.

East Village activist Jack Brown said he happened to be at 14th St. and Fifth Ave. when he saw a young male demonstrator refusing police orders to get out of the middle of the avenue. The man was eventually arrested.

Police and protesters scuffled in a melee at the Fifth Ave. intersection, with nearly three dozen reportedly arrested.

Calls for justice for George Floyd. Protesters were in the streets near Union Square to rally for a man who died at the hands of police in Minneapolis earlier this week.

This video shows a clash between some protesters and police. The NYPD says 33 arrests were made at the scene. pic.twitter.com/qldVaY2ile

The demonstrators, at one point, also marched as far south as City Hall and the World Trade Center, with more arrests reported in Lower Manhattan.

Meanwhile, in Minneapolis, people set the precinct ablaze where Chauvin and the other terminated cops had allegedly been stationed. After protesters breached the precinct and set fires inside, police abandoned the building.