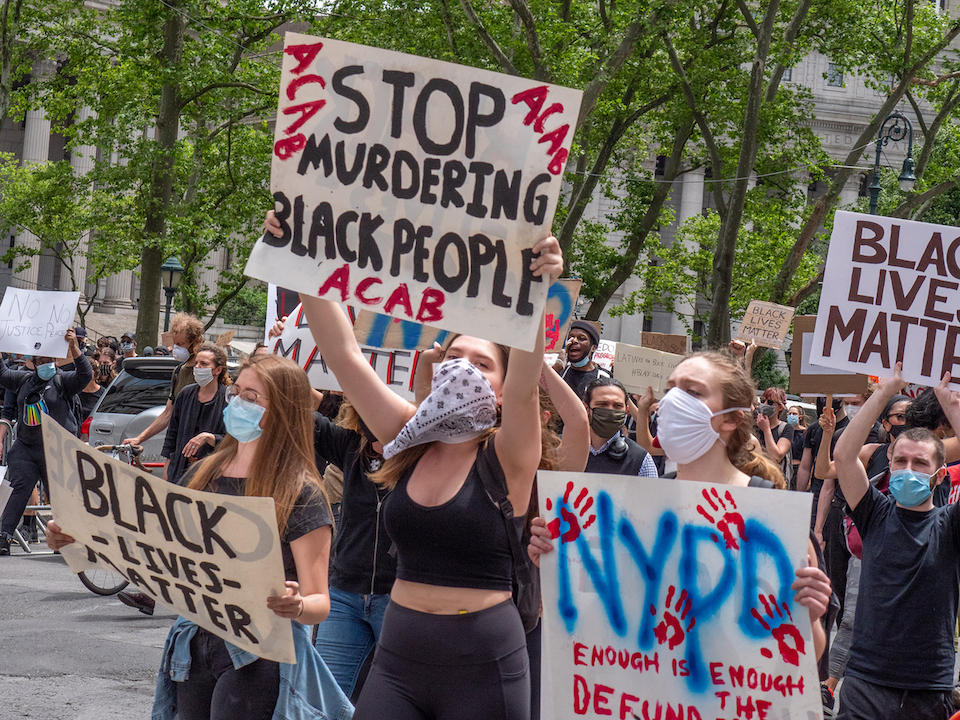 Protesters marching in Lower Manhattan over the police killing of George Floyd. (Photo by Milo Hess)

BY LINCOLN ANDERSON | Updated Wed., June 10, 11:30 p.m.: During the ongoing Black Lives Matter protests, police and F.B.I. agents have reportedly been questioning many arrested demonstrators about their political associations and activities — asking, for example, if they are anarchists or members of antifa.

For a certain group of civil-rights attorneys, that’s like sending up the Bat-Signal. … Or, more accurately, the Handschu-Signal.

On Mon., June 8, one of them, Martin Stolar, wrote to the New York City Law Department requesting clarification about the interrogations.

The arrestees claim they were engaged in peaceful protests, which is lawful political activity — albeit, after the curfew — meaning law enforcement is not allowed to interrogate them without express prior authorization.

Stolar first became aware of the issue after seeing a tweet a week ago by a Univision reporter on arrested protesters being grilled.

Using his contacts among public defenders and advocates doing “jail support,” Stolar was able to track down about a dozen individuals who had been interrogated, and he got their stories. These witnesses include a woman who is a former de Blasio staffer.

According to Stolar’s letter, the protesters, who were all arrested on relatively minor charges, were asked such questions as:

The protesters were interrogated in the period after their arrests and before they were arraigned and released with a summons, all of which is supposed to happen within 24 hours.

Stolar said there were more individuals he could have spoken to about being questioned, but noted, “I stopped asking once the pattern became clear.”

Over multiple decades, Stolar and a group of other civil-rights attorneys — whose names are on his letter to the city’s Law Department — have hashed out the guidelines with the New York Police Department on what kind of questioning and surveillance is allowed of protesters and activists, as well as reporters and others.

The other attorneys include Franklin Siegel, Paul Chevigny, Jethro Eisenstein and Arthur Eisenberg, the executive counsel of the New York Civil Liberties Union.

Their effort dates back to when they were in their 20s and 30s and a class-action lawsuit in 1971 on police infiltration of the Black Panthers. That case was eventually settled in 1985, leading to what’s known as the Handschu agreement.

As Stolar explained, “It’s the guidelines on how the N.Y.P.D. can investigate First Amendment activity — political, private and religious, press.

“The bottom line,” he said, “is they have to lay out some specific reason for conducting the investigation.”

Over the years, the police have tested the Handschu decree, stretching its boundaries, and also weakening it. Yet, Stolar, who is now 77, and his allies remain vigilant watchdogs.

The N.Y.P.D. fought to loosen the restrictions after 9/11, arguing it was necessary to combat terrorism. But subsequent police blanket surveillance of Muslims and mosques was challenged in court, leading to a settlement and the disbanding of the department’s Muslim surveillance unit.

As Stolar explained it, “If you want to put an undercover into a mosque, you need a specific criminal reason — [some] articulable criminal activity.”

In addition, in May 2015, Stolar and the Handschu advocates wrote to then-Police Commissioner Bill Bratton and Zachary Taylor, the head of the Law Department, raising concerns about individuals protesting the death of Eric Garner being questioned by police after their arrest.

Lawrence Byrne, the N.Y.P.D. deputy commissioner for legal matters, wrote back to them, saying that protesters had been interrogated because there was “a proliferation of threats communicated over social media and by other means calling for police officers to be murdered and assaulted.”

Also, Byrne noted, Commissioner Bratton and his security detail had been splashed with fake blood by protesters in Times Square.

Nevertheless, Byrne, in his response to the Handschu attorneys five years ago, wrote, “The N.Y.P.D. takes seriously its obligation to adhere to the letter and spirit of Handschu Guidelines. … Consequently, in April of this year, the [N.Y.P.D.] Legal Bureau directed that post-arrest questioning by members of the Detective Bureau of persons arrested during protests may not be conducted absent explicit advanced authorization by the Legal Bureau on a case by case basis. This is intended to ensure that the Handschu Guidelines are either not applicable…or are fully complied with if applicable.”

In his June 8 letter to the Law Department, Stolar praised Byrnes’s saying that the Police Department’s Legal Bureau would be required to authorize questioning of arrested protesters on a case-by-case basis.

“His promise was a positive step,” Stolar wrote.

However, Stolar added that, in light of Byrnes’s promise, the current reports of widespread interrogations of protesters “raise profound concerns under the Handschu decree.”

Specifically, Stolar and the other attorneys are concerned that the questioning of Black Lives Matter protesters is being used to generate records on the arrested individuals, which is also prohibited.

So, at this point, Stolar and his allied attorneys are awaiting the Law Department’s responses to a slew of questions, including — the main one — what’s the legal basis for police questioning peaceful protesters in the first place?

“We’ll wait and see what their answer is,” he said. “We’d like an answer as soon as possible.”

Finally, it should be noted that the protesters don’t have to answer their interrogators.

“You’re under no obligation to answer their questions,” Stolar said. “Just pedigree information — name, address, date of birth. You have to identify yourself, but that’s it. Otherwise, you keep your mouth shut and you’re totally within your rights. If you open your mouth and you lie, you may be prosecuted.”

Asked if the witnesses he interviewed gave any answers to police or agents beyond just the basics, Stolar said generally not.

“Most of the people I spoke to,” he said, “kind of figured out what was going on and were disinclined to answer the questions.”