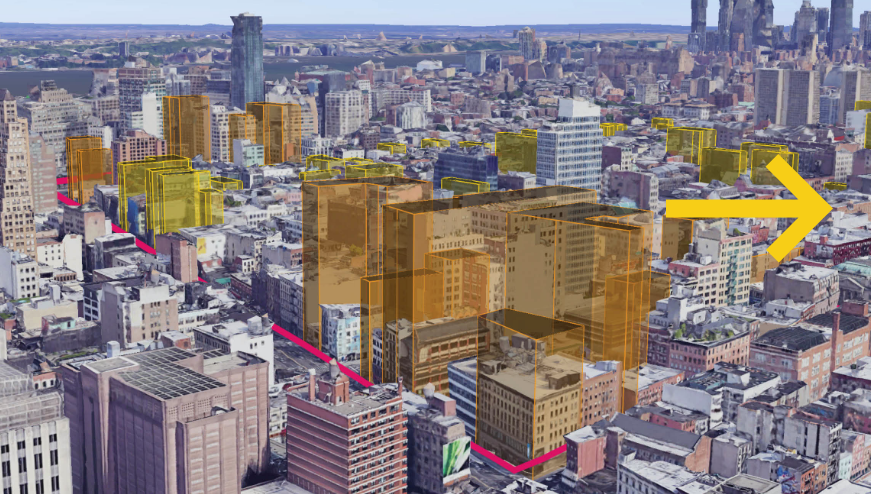 Under the mayor's embattled Soho/Noho rezoning proposal, Chinatown, in foreground, would be slated for large-scale development. Opponents warn this would lead to displacement of lower-income people of color. (Municipal Art Society)

BY THE VILLAGE SUN | Neighbors from Chinatown to Soho will unite at a press conference Monday to condemn what they are decrying as the mayor’s “fake social justice plan” — a.k.a. the Soho/Noho rezoning — and instead demand real protection against displacement.

The rally will start at noon at 183 Centre St., at Canal St.

According to the protesters, contrary to the mayor’s misleading “social justice” portrayal of the plan, the Soho/Noho rezoning would escalate displacement across Lower Manhattan, especially in the communities of color of Chinatown and the Lower East Side.

Many of the administration’s identified sites for large towers are on the border of Soho and Chinatown, and would result in demolition of buildings with affordable rent-regulated units, lower-income tenants and local small businesses, the opponents charge.

In addition, they say the mayor’s rezoning would cause area property values to rise, and incentivize landlords to raise rents and harass and evict their tenants, especially those in rent-regulated units.

The opponents further warn that the city’s plan would benefit big developers and landlords, like the Chu family, who own multiple properties within the proposed upzoning area and are notorious for displacing Jing Fong restaurant and destroying the last union restaurant jobs in Chinatown.

Per a press release for the event: “Residents of Soho, Noho, the Lower East Side and Chinatown are unifying to denounce the rapid displacement this upzoning will cause, and to present plans for community-led rezonings that protect seniors, tenants, workers and small businesses from being forced out of the neighborhoods they helped create.”

This past Monday, the Department of City Planning had been expected to certify the contentious Soho/Noho rezoning plan, which would have kicked off ULURP, the city’s seven-month-long land-use review process. Just days earlier, though, Soho and Noho opponents sued, charging that the city had failed to provide a project summary to Community Board 2, as required by ULURP, plus that Zoom virtual hearings on the plan cannot replace required in-person meetings.

Some media got the reporting wrong on the lawsuit, with one local outlet misleadingly claiming the challenge was “short-lived” and got a “quick boot from court.”

In reality, while the plaintiffs sought an injunction against the rezoning, the judge ruled there “was no immediate harm posed” — since the city had balked from certifying the plan.